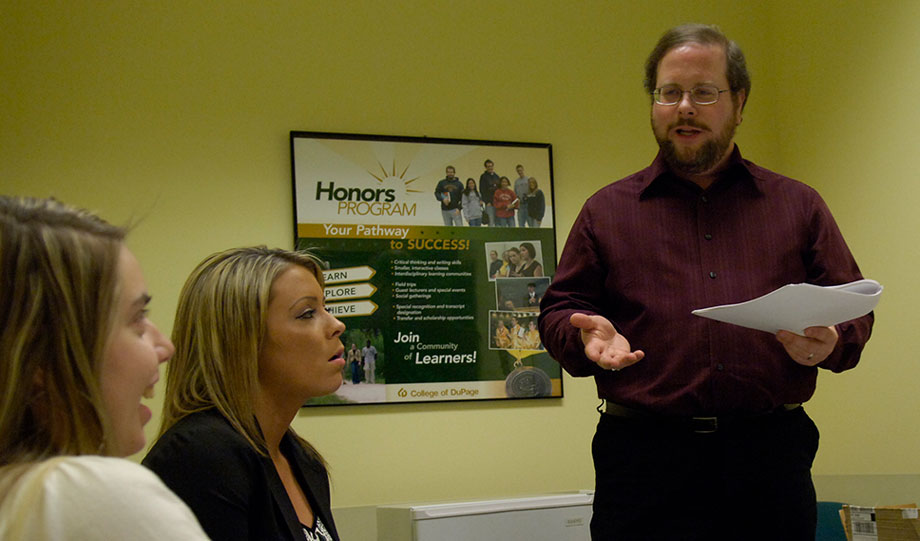 For Jim Allen, a College of DuPage professor of English whose specialty is composition and rhetoric, and whose literary taste favors science fiction, the first day of his teaching career might best be described as one from out of this world.

"I literally started to teach classes the first semester I was in graduate school," said Allen, who has taught at College of DuPage since 1992. "It was a pretty frightening experience."

Allen recalled how he and five other teaching assistants at the University of South Carolina in the late 1980s were assigned to a professor who conducted a course in both composition and literature for about 150 students.

"He sat around this table with us, took out the roll sheet, and ripped it up into six pieces," said Allen, who recollected that the professor handed one sheet to each TA. "He said, 'Here's your class.' He divided the students up. He would lecture to them on one day and then in the next class meeting, it was just us and the students.

"My first question was, 'How do I even talk these students for an hour and 15 minutes, let alone, what am I going to say?'"

Happily, Allen and the other TAs found plenty to say, and there is no doubt that his graduate school teaching experiences helped him embark on a teaching career that earned him the distinction of being named College of DuPage's overall 2008-2009 Outstanding Faculty Member and Outstanding Advisor for 2011-2012.

Allen's academic interests in rhetoric range from the far past, and his curiosity about science fiction springs to the distant future. He imparts both interests to his students, instilling in them the importance of each subject. He teaches English composition year round and usually presents a course in science fiction each spring.

"One of my first graduate classes was in Classical Rhetoric and that got me hooked – Aristotle, Plato, Quintilian. That still forms the foundation of what I teach."

Allen said that the focus of his English 1101 classes is the argument, how to understand it, analyze it, and how to compose and create one effectively. When his students work on thesis statements, they do so from the perspective of what claim the statement is trying to make. He believes this skill is an important one that students need to acquire in every aspect of their college careers since they are going to be asked to do that in whichever academic subject they decide to pursue.

"I would like them to walk away understanding a little more how this process works, how you understand an argument, how you create an argument, how you know when somebody is arguing in a way that is not exactly ethical or well thought out," Allen said. "I think of my classes as an introduction to rhetoric. I'm always after the stuff that takes more brain work – hard work."

Though he pushes his students to rise to intellectual challenges, he does not believe he is necessarily a task master. The more students will take out of his courses, however, depends on the amount they put in. Classroom interaction is what Allen especially enjoys from them.

"The nice thing about the interaction is that the interaction continues afterwards when students come back to see me," he said. "Sometimes, I've had friendships with students that go back almost a decade. To me, that is the fun part, especially making those connections."

The world of science fiction, with its emphasis on humanity's future, also ranks high in Allen's list of intellectual interests.

"In my Science Fiction class, there are hardcore heavy Sci Fi readers who have read authors from A to Z," he said. "I also get some students who have read hardly any science fiction. They just want to find out about it."

Science fiction writers might not be ranked with the likes of Aristotle and Plato, but Allen presents a well-honed argument as to why science fiction literature is not to be ignored as a serious academic pursuit.

"I make the bold claim in class that science fiction literature is the most profound literature people can read because it is about humanity in so many different ways that other authors can't touch or can't touch in the same way," he said. "It speculates about our future, postulates about our past, it deals with all the big questions and what it means to be human. What's our relationship to us and our technology, where are we going, what kind of people are we, what's our species' destiny. It also gives the opportunity for us to move into the sciences as well. I usually make an effort to bring some of the science into the science fiction."

In spite of his interest in rhetoric, composition and literature, Allen said that his own most inspiring teachers were not necessary his English professors. He recalls a former music teacher and a theater teacher who inspired him most.

"What I took away from those mentors was the importance of the teacher-student interaction," he said. "Those are the people who stick out in my mind because of the support that they gave me. I probably remember a quarter of what the music teacher taught me, but the impact he had was far more reaching."

As far as the notion that people are reading less and less and that literature studies are on the way out, Allen dismisses that belief.

"Plato complained that the new technology of writing was going to ruin people because they were going to lose their oral tradition," he said, noting reading sources online as well as graphic novels. "People will have a desire for literature. Humans are a story-telling species. There will just be a question of what form it is in."