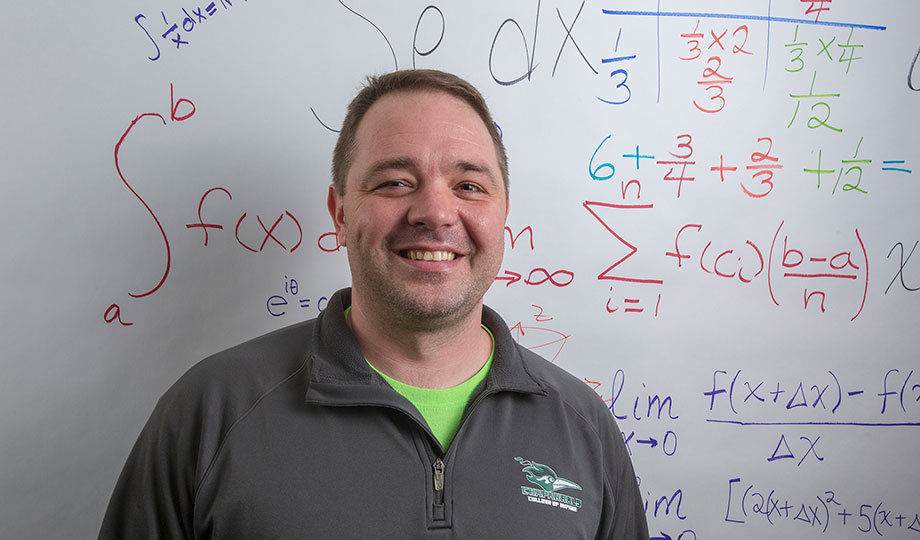 Once he reached college, Bailey was asked about his interests in order to determine a possible career path. He really liked astronomy and began studying science and math. Although out of practice, he found his math classes both challenging and enjoyable.

“For my calculous sequence, I had a great instructor who really made an impact on me,” he said. “I took many classes from him, and he suggested that I pursue some undergraduate research opportunities in math. I also began tutoring which, initially and selfishly, I found helpful toward my own understanding of math. By the time I finished my degree, I truly became passionate about helping people understand math.”

After earning his bachelor’s degree in Mathematics with a Humanities minor from the University of Wisconsin-Green Bay, Bailey wanted to continue his education. But an accident sidetracked his plans and he instead taught for one year at a middle school in Arizona, where he also coached the football, basketball and baseball teams.

But Bailey returned to Illinois and finished both his master’s degree and Ph.D. at Northern Illinois University. While doing so, he taught part-time at Kishwaukee College for a year and thoroughly enjoyed it.

Now at College of DuPage, he hopes his students take away the skills learned beyond the content.

“Hard work and dedication can lead to a more fulfilling life, and I hope this sticks with my students,” he said. “I’m always impressed when former students come back and are doing well.

“I’m also inspired and impressed by the dedicated faculty who help our students succeed. As a student, college was such a rewarding time for me, and I now watch my students experience those same rewards. In fact, I tell them I am jealous that they can take more classes!”