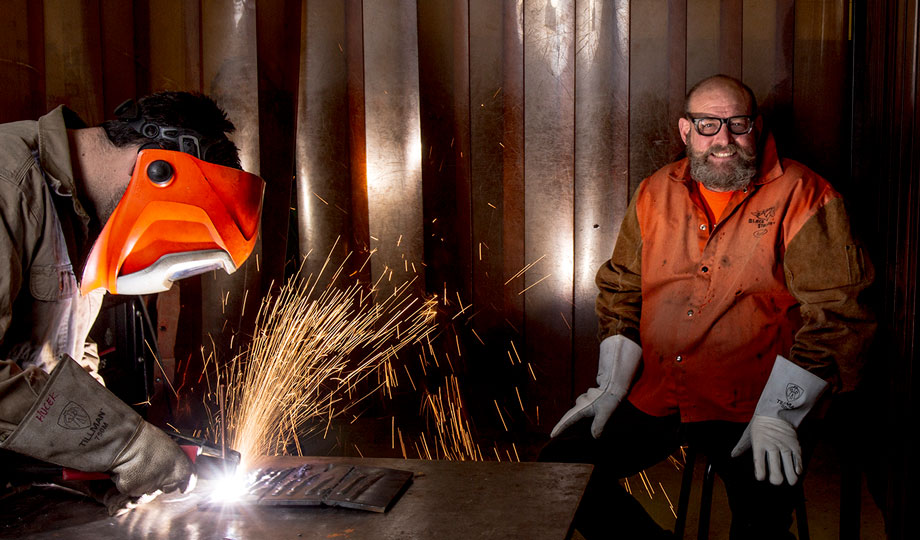 David Ellis learned welding while serving in the Marine Corps.

“After the first Gulf War, we had to drag armor to the Kuwait City Harbor, and in one month I had a crash course in welding,” he said. “It was hands-on and I loved it.”

Upon returning home, Ellis used the G.I. Bill to earn a bachelor’s degree in economics began working in international trade. But when the economy fell apart, he began researching other fields and discovered that welders were in demand. He then enrolled in a welding program and, before completing it, landed a job in Calumet. He since has worked at Bretford Industries and at Caterpillar in robotic welding.

“People think robots are taking over welders’ jobs, but that’s not the case. Technology is the way to tackle the job, but you need employees to work with the technology to create a high-efficiency environment,” he said. “What we talk about now is the need for ‘shoulders-up work,’ meaning the critical thinking skills are just as important as the physical ones.”

While in the military, Ellis developed his organization skills and used them in a variety of capacities. He enjoyed training teams and learned how to do so effectively.

It was no surprise that Ellis began thinking about teaching and is now an integral part of College of DuPage’s growing Welding program.

“I like learning. I like knowing more today than yesterday, and I hope my students feel the same way,” he said. “They are dedicating themselves to learning the processes involved in welding and then beyond that so they know the ‘whys’ and the ‘hows.’ I want to see them receive their certificates and make a fair living. Perhaps they can even push beyond the certificate if that’s what they want to pursue, because Welding is one of the few trades where you can get a Ph.D.

“I believe there’s a job for everybody, and I want my students to see all of the possibilities, especially female students. Welding is a fantastic career for women.”

More about the Welding program