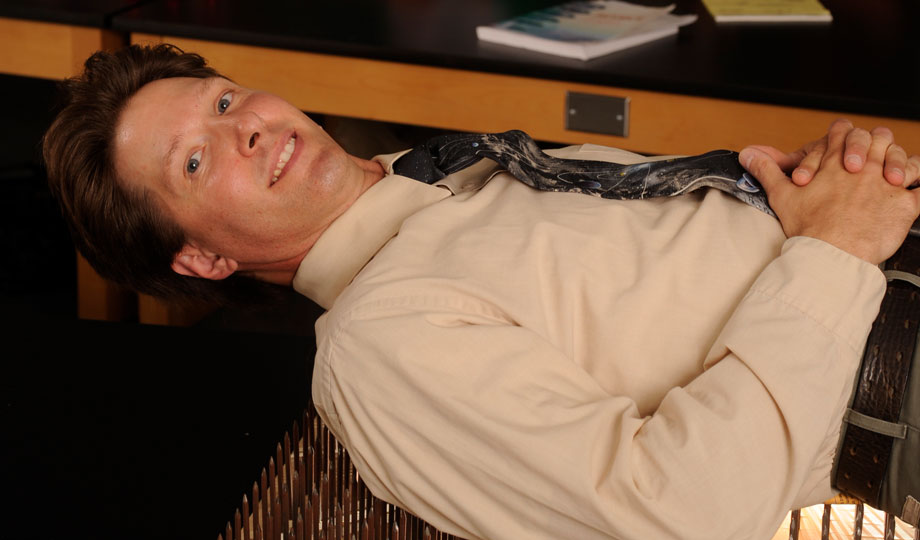 When it comes to arousing his students' interest in physics, associate professor David Fazzini has literally nailed down an ideal lesson plan.

For students in Physics 1100, Physics for Non-Majors, the lesson is not one they will likely forget. But in terms of what exactly they have learned, it is best to let Fazzini explain in his own words.

"First, in the words of our textbook author, 'momentum packs the wallop, but it is the energy that does the damage,'" he said. "In the collision, every bit of the momentum imparted by the hammer is transferred through the block, nail beds, me and to the earth, except for a small amount of momentum that goes into the flying block fragments.

"However, most of the energy in the dropping hammer goes in breaking the cinder block. Therefore, very little energy that does get through is distributed over the many nails that make contact with my body."

That's easy to understand, but then there's more. And students who have kept up with their homework undoubtedly get the point.

"Second, Pressure equals Force divided by Area," Fazzini continued. "Even though the tip of each nail has a very small area, there are many, many nails so that the overall area of contact is large enough so that the force of each nail on me is too small to break the skin."

To maintain his students' undivided attention, Fazzini first adopted this lesson plan after he was "chosen" by a colleague to "volunteer" to be part of a similar physics demonstration the colleague was leading. Fazzini had also seen photographs of the demonstration. "People seemed really 'wowed' by it," he said.

Fazzini presents this demonstration in each of his Physics 1100 classes and would also like eventually to present it in other levels of physics courses when discussing momentum and energy. Though he feels no pain during the demonstration, he does acknowledge there is a possible risk.

"The first time I did it, it didn't bother me at all. But using these large heavy beds with the widely spaced nails was a bit disconcerting," he said. "I am most nervous when the upper bed – which is quite heavy and requires two people to lift – is moved over me to be put in position. If one of the helpers were to drop the bed while holding high above me, then my wife might be cashing in the life insurance policy."

He said he also needs to make sure that the person swinging the hammer has good enough aim to be sure to hit the block. That hammer-swinging individual is often Fazzini's colleague Tom Carter, professor of Physics.

Not many physics students have a professor who will put himself in harm's way to make a point about how physics works in our everyday lives. But the more times he makes this demonstration the more his fame begins to spread at College of DuPage, and perhaps, beyond.

"Most of the questions from students are, 'Does it hurt?' To which I reply, 'Of course it hurts, but I'm willing to sacrifice my body and endure that pain if it will help you better understand the underlying principles' ... or something to that effect," Fazzini said. "Others take pictures with their cell phones, while others ask if the video is available. I suppose that I'll probably see myself on YouTube someday."