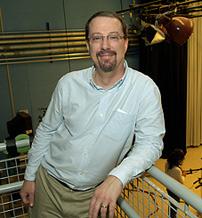 For someone who never set out to teach "in any way, shape or form," Jeffrey Fisher, an instructor in College of DuPage's Motion Picture/Television program, has produced a part-time teaching career that has earned plaudits from students and peers and a top award from the college.

To say that he hit the ground running in his teaching vocation may be an understatement.

After being hired in 2002 by Jeff Curto, COD. professor/coordinator of Photography, who at the time was coordinating the college's Multimedia Arts area, Fisher's first teaching assignment was an all-day class from 9 a.m. to 3 p.m. Fisher's task: Teach Audio I and II at the same time in the same room.

Despite the daunting challenge, Fisher said he felt "as comfortable as a good pair of jeans. It just felt right."

After that class, two students came up to Fisher and said, "Oh, you've been teaching for awhile." Fisher responded: "Would you think less of me if I told you that I had never taught a class before in my life?" The students said, "Well, you should probably keep doing it."

Drawing on a bonanza of experiences as owner and manager of Fisher Creative Group, and his passion for the motion picture/television industry, Fisher is a past winner of COD's Overall Outstanding Part-Time Faculty Award. Fisher's real-world work experience at Fisher Creative Group is key to his teaching success.

"I share things that happen to me in my business with my students," Fisher said.

His work in the industry centers on audio, video, music, writing, training and media production services. He has published 11 books addressing audio, video and music subjects and has authored magazine and web articles and training manuals. Fisher has also produced more than 225 videos for corporate and educational clients and completed many audio-based projects including award-winning work in audio post-production for film, television, CDs, DVDs and web audio.

Further, Fisher is a regular speaker and trainer at the prestigious National Association of Broadcasters convention, where he and Jennifer Piehl, COD professor/coordinator of the Motion Picture/Television program, have taken groups of students.

"That trip opens students' eyes," Fisher said. "It is the real world and sometimes students don't understand how really diverse this industry is."

He said students who attend the convention come to understand that the industry is not just directors and producers, but that it is broad-based with myriad career options.

"All the projects that I design for my classes introduce skills that I feel the students need to know in order to go forward," Fisher said. A big fan of hands-on projects, Fisher will "cement a skill in place" and then reinforce that skill in the next project. These projects and learned skills continue to build until the moment of truth, which Fisher said usually occurs about this time in the semester.

"At the beginning of class, students wonder why we do this and why we do that. Then, all of a sudden, there is perspective and they can see that every skill they learned now comes to its head with these final projects. That makes me feel so good."

More about the Motion Picture/Television program