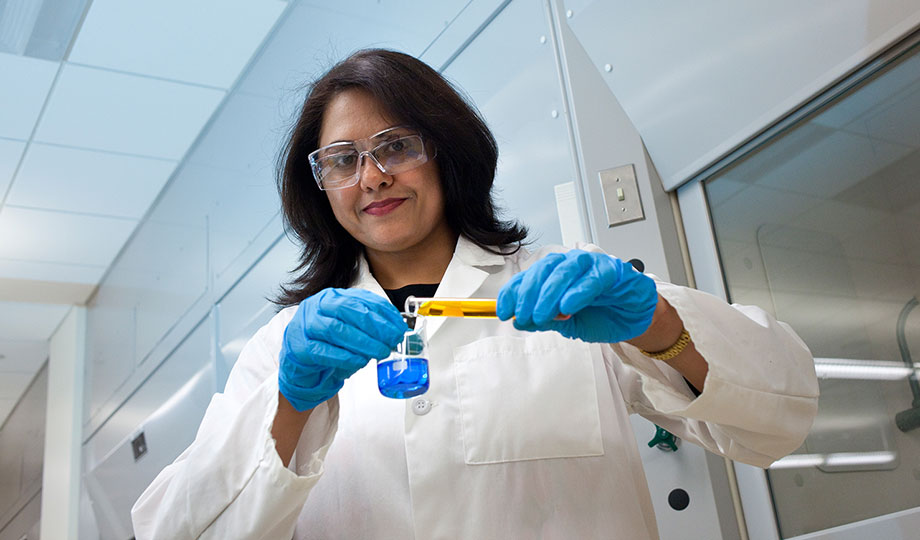 Lubna Haque is a person who likes to be challenged. It was her seventh grade math teacher who recognized her abilities and challenged her to move forward.

“I’ve always had an analytical mind, and my teacher saw an aptitude in me for math and its applications,” she said. “She would give me additional practice questions and encouraged me to be part of the science fair. As a result, I began to gain more confidence and wanted to go further with my education.”

By high school, Haque was earning top grades and was leaning toward studying architectural engineering. But math and physics no longer presented the challenge they once did. Instead, it was chemistry that intrigued her and she liked to study its applications, whether it was how medications reacted differently or why one type of soap was better than another.

When she started her pursuit of an applied chemistry degree at the University of Karachi in Pakistan, Haque was one of only 18 women in a class of 400 students, and the expectation was that the women would either change majors or not graduate. Instead, by the end of her first year, she held the top position in her class.

“My whole persona began to change,” she said. “I became a leader for my class. I would sit with a teacher or advisor and help other students plan their coursework. My teachers really encouraged me to do more and to continue beyond my bachelor’s.”

Haque earned both bachelor’s and master’s degrees in applied chemistry. She landed an internship at Glaxo Pharmaceuticals (now GSK) in Pakistan and began teaching at nearby technical institutes. But she didn’t feel like she was growing as a professional, so she came to the U.S to pursue a second master’s in chemical engineering at the University of Maryland – College Park. During her first year, she received the Outstanding Teaching Assistant award based on reviews from her students.

As part of her graduate school, Haque secured a series of research positions that provided the experience she needed to work in the field. First was an internship at Oak Ridge National Laboratory, known for its work on the historic Manhattan Project. When her advisor moved to Purdue University – Lafayette, Haque followed and spent nine months there as a nanotechnology research associate. Then she spent one year at the University of Akron as a post-doctoral researcher, where she originated three patents in nanotechnology.

Haque relocated to the Chicago area and married. Having taught on and off for several years, she decided teaching part-time at a community college would provide a much-needed respite from her research. But after landing a part-time job at Elgin Community College, Haque discovered that she was challenged most by teaching.

“I realized the level of dedication that teachers needed to be good at what they do,” she said. “One year as a part-time teacher brought out a dedication in me that I never expected. I decided to put research on hold and started putting together teaching materials for my new career.”

At one point, Haque was teaching part-time at Elgin, Harper and College of DuPage simultaneously before securing a full-time position at COD in 2008.

“When you teach at a four-year school, your students are approximately the same age and have the same major. At a community college, you have all ages coming to your class for a variety of reasons with various levels of experience and personal challenges,” she said. “I always encourage students to think of chemistry not as a prerequisite but as something to learn from and treasure for the rest of their lives.”

Innovative methods are the focus of Haque’s teaching philosophy. She has initiated the development of hybrid chemistry classes and co-authored lab manuals. She also helped to organize the Chemistry Bonding Club for students as a way to promote fun in chemistry. In addition, she has been an advisor of the Asia Club, volunteered for the annual Science Olympiad, helped organize the Girl Scouts Chemistry Badge, and served on various college-wide and advisory committees.

Haque enjoys the supportive environment of the Chemistry department. For the 2013-2014 academic year, she was named the Overall Outstanding Faculty Member at College of DuPage.

She is truly grateful to all of her teachers, advisors and mentors for challenging her to pursue her goals beyond what she expected from herself.

“Positive encouragement is very, very important for students. It’s really the simple things we do as teachers that have the most impact,” she said. “I always give my very best, as this is so much more than a job.”

More about the Chemistry program