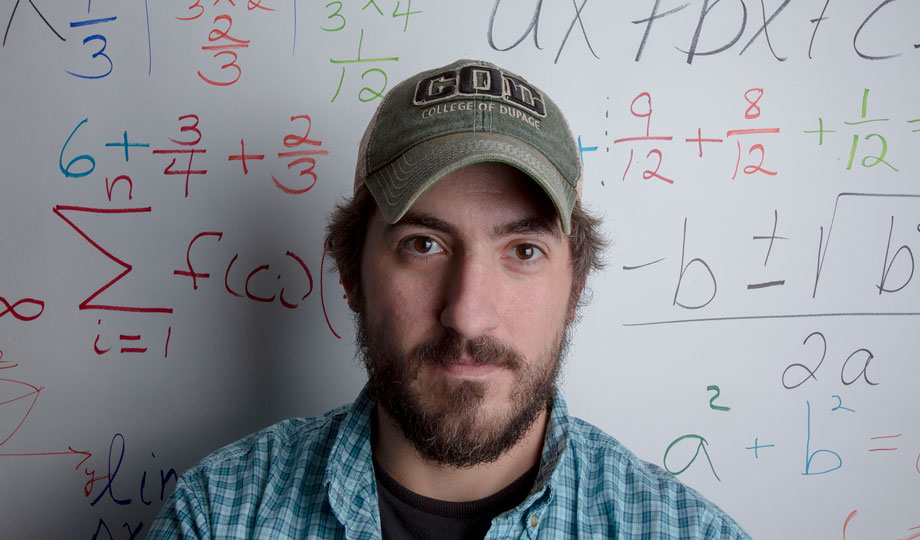 During his junior year in high school, Michael McCabe had one teacher who was compassionate and understood he needed extra help.

“Without me asking, he took me under his wing and broke things down in a way I could understand,” he said. “It was the first time this ever happened. Until then, I was just pushed through the system. I now love being able to identify students who were, like me, pushed through the system but have the motivation to learn a new thing if it was broken down to where they could understand it.”

His love of math began in the fifth grade when given a Four 4’s worksheet. McCabe wasn’t the first to finish but enjoyed the challenge, which he said didn’t happen much in school.

However, it would take time before he returned to math as a possible career. While in high school, McCabe joined the Army and left for Advanced Individual Training at Fort Sill, Okla., after graduation.

He was first stationed at Camp Hovey in South Korea and then was deployed to Al Ramadi, Iraq. As a Fire Support Specialist, he was responsible for IED denial missions on main supply roads, sniper overwatch and forward observer duties at various strategic locations.

“During one of my missions, I was shot by a sniper and received the Purple Heart. If it wasn’t for my arm and my protective vest, this story would be non-existent,” he said. “After my time during the Sugre in Baghdad, Iraq, I was released with an honorable discharge and came back home.”

A veteran with a 13 ACT score, McCabe enrolled at Northern Illinois University in its CHANCE program. He started off in a remedial math course and immediately took a leadership roll, which he learned in the military.

“At that time, I thought my identity was gone because I left the military. But a new one was formed while teaching and tutoring students in various levels of math courses. I love it when I get the ‘ah-ha’ moment and love the challenge of coming up with different ways to explain things to achieve that moment.”

While in the CHANCE program, McCabe worked on web development and hosted summer math sessions at Roosevelt University in Chicago to help incoming students from the city. He earned both his bachelor’s degree in Pure Mathematics with a minor in Physics and then a master’s degree with an emphasis in Pure Mathematics. During this time, he published a paper on the existence of solutions for a specific collection of Fractional Differential Equations.

McCabe then was an instructor for five years at NIU, where he developed a remedial course to help students on a non-STEM path. He also coordinated the construction of a Lightboard for the Math Department and filmed five-minute videos to supplement learning for calculus students. During his down time, he devoted his energies to the Math Assistant Center, where he developed new techniques to help students.

Now at College of DuPage, McCabe rarely spends a moment not thinking about new techniques to introduce to students.

“I love using technology to reach the students and try to meet them where they are,” he said. “I want them to believe math is useful, and I am not talking about the bland solve-for-‘x’ questions. I want students to want to ask why something is the way it is.

“I love coming up with different ways to explain the same thing. It was something I learned in the military. One of my duties as a forward observer was to direct soldiers on the battlefield and put them in the best position to succeed, and I did a really good job doing that because of the leadership I had around me. In the classroom, if feel like I am directing students into the best position to succeed and grow to become a better person in society—and learn some math along the way.”

One of his goals is to help students become better learners.

“When I was in college, I was a terrible student at the beginning,” he said. “I was burning myself out on study habits that I thought would work. It wasn’t until I went to a counselor on campus and asked how to keep on top of my schooling. There I learned all sorts of different techniques and procedures to study. Not all of them worked, but I felt enlightened by the plethora of different ways to prepare for class.

“I now spell out different ways to study for my class. I remind them of the phenomena of ‘it made sense in class but tonight it doesn’t.’ I tell them, ‘One hour from now, do this example again.’ I hope that when a student leaves my class, they know school is not impossible and effort is necessary to succeed.”

For his own inspiration, McCabe finds it in his wife and children.

“My wife is a full-time night shift nurse and a full-time nursing school student. She attacks each day with a motivation to succeed, all while setting up play dates and fun activities to do,” he said. “For my kids, they inspire me to show how important it is to be a positive and impactful person. My wife volunteers for many relief programs, Make-A-Wish and Pit-Bull rescues, while my kids jump to the task, whether its serving bread at a soup kitchen or playing with a foster dog and whispering, ‘Don’t worry, you’ll get adopted soon.’

“There was a sergeant who raised me during my time in the Army. He taught me that I should demand of myself to be the best at what I do—otherwise, get out of the way. With that, I am constantly evolving and implementing new teaching techniques. I am excited to be at College of DuPage because here I truly believe with the resources available I can learn so much more about being a better teacher, and I know I can do the best helping students succeed and reach their goals.”