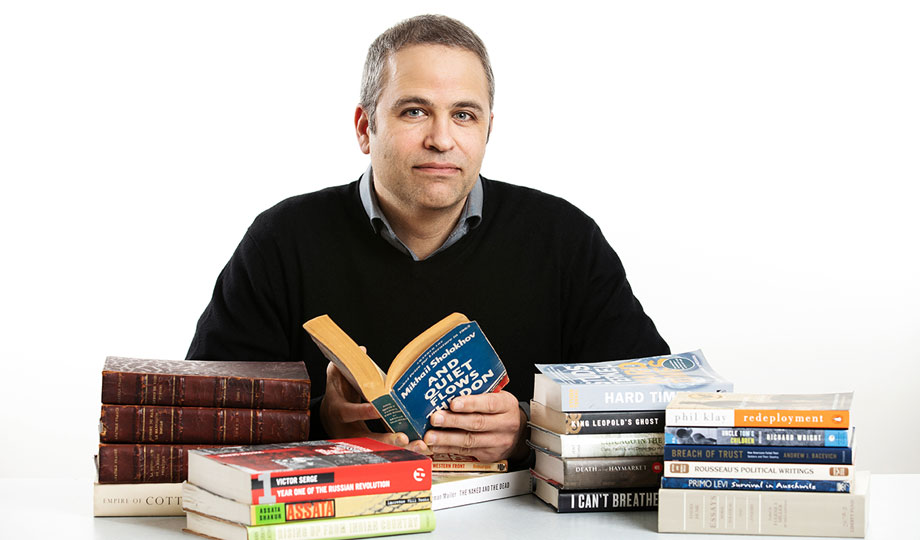 For the College of DuPage associate professor, the value of history is universal.

“I think there’s a push to reduce COD and other community colleges to training. I think we absolutely need training. But I want my nurse, the person who’s working on my car, the electrician, the business person to also understand something about history, about how society evolves, about where they are placed within the broader framework of humanity,” he said. “We have something really important to offer to the community beyond preparing people for a job.

“The cool thing about history is you can figure out why things improved, why other things have become worse—and how we can encourage one thing and avoid another. But to do that, it takes people finding a way to think outside their own immediate lives.”

Mitrani’s personal story shaped his professional life. He grew up on the East Coast, living part time with his hippie father in the Vermont woods with no electricity or running water—a lifestyle he grew to love—and part time with his mother in New York.

“It was the contrast between those two lives that made me interested in history and also made me critical of the idea that the way we live is the way we have to live,” Mitrani said. “It’s not just that some people get to live well because they have money and other people live terribly because they don’t. It’s not that simple.”

Mitrani’s great-grandfather, who owned an underwear factory, left his great-grandson enough money to pay for college. The rest went to Israel, a contribution he questioned as a youngster viewing the turmoil of the First Intifadathat further fueled his interest in history and politics.

“It was obvious that you have to be on the side of the kids who have no food, are living in poverty and are throwing rocks at soldiers who are shooting them back—even though my family is Jewish,” Mitrani said. “I very quickly came to be critical of a narrow nationalist way of looking at the world.”

“I went to the University of Chicago for my undergraduate degree and wanted to understand why the world was set up the way it was,” Mitrani said. “The answer is history. You can’t understand the way the world is without trying to figure out how we got here. History is a constant unfolding of the past into the future.”

Mitrani earned his Ph.D. from the University of Illinois at Chicago in 2009, joined the COD history faculty in 2011 and wrote a book, “The Rise of the Chicago Police Department Class and Conflict, 1850-1894,” in 2014. Teaching is where he wants to be, and he encourages students to select a history class of interest to them.

“I teach one class called ‘World War II and the Holocaust,’ and those students are different than the ones in my African-American History class. I’m launching a new class suggested by David Ellis, assistant professor of Welding at COD, about labor history, the working class and the history of work,” Mitrani said.

“It’s rewarding seeing students come to understand their place in the world in a broader way and to think about and even question the assumptions they made about their society.”