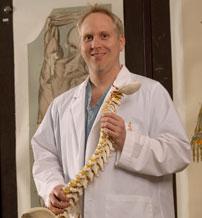 In teaching his anatomy and physiology courses at College of DuPage, Peter Porter draws on an immense body of knowledge from his own experiences in the health field.

But in terms of what he hopes students take away from his classes, he draws on an idea championed by one famous former teacher, Lyndon Baines Johnson – or LBJ – 36th President of the United States.

"I hope my students are empowered with the skills that they will need to be successful in their programs and be successful professionals," said Porter, who has taught at College of DuPage since 2005. "LBJ once said, 'You can give somebody a fish and they can eat for a day, or you can give them a fishing pole and they can fish and eat for the rest of their lives.'

"I'm trying to give people mental fishing poles. I'm trying to give them the skills that they need to learn material as they go along, to understand and learn those critical reasoning and application skills they are going to need when they get into the program."

For his teaching efforts, Porter hooked the respect of fellow faculty members by being named College of DuPage's 2008-2009 Overall Outstanding Part-Time Faculty Member. A chiropractic physician who began teaching six years ago, Porter said of his new-found vocation that if he were not teaching, he "would be trying to teach."

"I absolutely love teaching," said Porter, who worked in private practice in a sports clinic. "I did not expect to be a teacher ever with my educational and occupational background. Teaching was not on my radar. But then I was offered a class at Moraine Valley Community College. They had a teacher who got sick before classes started and a colleague of mine who taught there asked me if I would be interested in teaching a night class in anatomy.

"It was like a light bulb going off," he said, recalling his first evening in class six years ago. "I said to myself, 'Oh my gosh, this is what I was born to do.'"

Porter recalls his own most inspiring teacher.

"Dr. Nuga!," he said, referring to Adenuga Atewologun, who most recently served as the college's Dean of Natural Sciences. "I took a summer class here at College of DuPage, a physics class, a long time ago. He made it the most interesting class I have ever taken. He is exactly what I have patterned my career after."

Even though he arrived at teaching later in life, he believes he had the natural ability to teach while he was younger, growing up in Downers Grove and eventually attending Downers Grove North High School.

"When I was in school growing up, I was the kid who took apart the toaster because I didn't know how it worked," he said. "I would watch magicians to figure out what was going on.

"Then throughout schooling, that kind of mindset continued. I always tried to figure things out. Teachers would throw facts around and I would always ask, 'Why is it that way?' I found I really understood the material because I looked at the How and Why as opposed to just the What."

Porter also found that other students naturally gravitated to him to find answers to academic questions, making him feel "like an informal tutor." As a chiropractic physician working with orthopedic surgeons, radiologists, physical therapists and other health care professionals, Porter also spent much time educating his patients.

"I think that set me up for teaching," he said. "Because when I got into the teaching environment, I found that was what it was all about. It was taking people who were coming in wanting to understand the human body. I would discuss the human body with them and put it in ways that they would understand."

But the three Teaching F's he assigns himself stand for something other than what anyone would guess they mean. They stand for Firm, Friendly and Fair, and while all three are self-explanatory, it is the first one that Porter likes to talk about most.

"I believe it is important to set up a solid foundation of structure so that people will know what to expect so that students know what is expected of them and how the semester is going to run," he said. "I try not to deviate from that."

More about the sciences