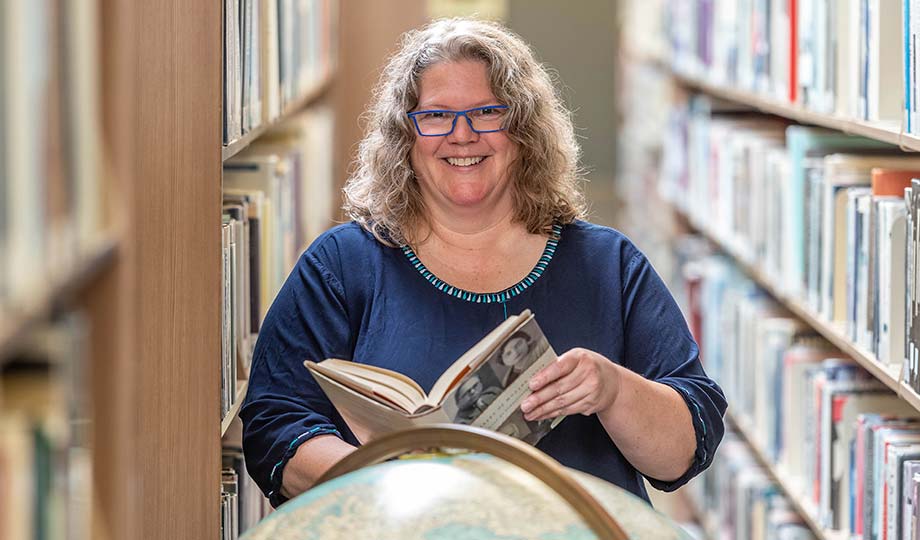 Maria Ritzema’s own family ancestry sparked her interest in history.

“I have always been fascinated with peoples’ immigration stories,” she said. “What made people leave their homes and come to the United States? What was happening in their homes that made the U.S. seem like a place to move to?

Ritzema’s father was a history buff who loved the American Civil War and read voraciously about it. He enjoyed correcting movies or TV shows if he felt they “got the history wrong,” she said.

“This exposed me to the importance of history as well as the idea that there could be many ‘histories’ of a subject.”

As a freshman at Grand Rapids Community College, Ritzema was inspired by her American history professor, who often acted out parts of his lectures and effectively used humor. A few years later, while finishing her master’s degree in Urban Planning at the University of Illinos at Chicago (UIC), she realized that she found the history aspect of planning more fascinating than the planning itself.

Ritzema decided to pursue a Ph.D. in History at UIC, focusing on South Asia – specifically India and Sri Lanka as well as Pakistan, Afghanistan, Bhutan, Nepal, Bangladesh and the Maldives.

“My interest in South Asia started with my father-in-law’s immigration story to the United States from Sri Lanka,” she said. “I must also credit my teenage love of Duran Duran with sparking an early interest in Sri Lanka as they filmed some of their videos there.”

Before earning her Ph.D. and with a bachelor’s degree was in Video Production, Ritzema worked in television as a production assistant, program operations assistant and traffic coordinator for three years at WOOD-TV in Grand Rapids, Mich., and nine years at WGN-TV in Chicago. She also worked for the Chicago Cubs in crowd management and at the Palmer House Hilton in reservations.

Ritzema wasn’t sure she wanted to teach when she first started her doctoral program.

“UIC is a place where part of your graduate funding comes from being a teaching assistant,” she said. “My second year of being in the program I was fortunate to be a TA for James Searing, a professor of Sub-Saharan African history. He was an amazing professor who fully engaged his students, and I decided I wanted to be a professor and—specifically—a Jim Searing kind of professor. Dr. Searing was able to mix his excellent scholarship of the region with other experts’ works to provide interesting content to his students. He was a master of creating thought-provoking questions that generated some of the most interesting class discussions. The longer I was a teaching assistant, the more I became convinced that teaching was for me. I am not at Jim Searing’s level yet but strive to get there every day.”

Before coming to College of DuPage, Ritzema held history adjunct positions at a variety of higher education institutions, including UIC, University of Wisconsin-Parkside, Carroll University, Madison Area Technical College and Milwaukee Area Technical College. She hopes her students learn how important it is to know the past in order to understand the present.

“I do not expect them to necessarily remember all the details of the Sepoy Rebellion of 1857 but instead why it was important to South Asian history,” she said. “I hope they take away the knowledge of analyzing different sources to come to a conclusion on a subject. They may not remember the details of whatever subject they took with me, but they should remember that when they come across any sort of content or a subject or an idea, not necessarily historical, they are able to research it, analyze it and come to an understanding of it by using skills developed in my classes.”

Ritzema recognizes that many of her students already love some aspect of history and she enjoys hearing about how they became interested in that topic.

“They will suggest books, films or something else that they have consumed on the topic,” she said. “This gives me a bit of insight on what students are interested in.

“My colleagues are also wonderful resources. We spend lots of time discussing the ‘state of our field.’ We share information we have come across—books, articles, podcasts—that we like and want to get each other’s thoughts on. I pick their brains quite frequently on how they teach, what works for them, what didn’t work and what sources they like to use. Part of being an academic is being open to new information, new possibilities and to look for these in all kinds of different places.”