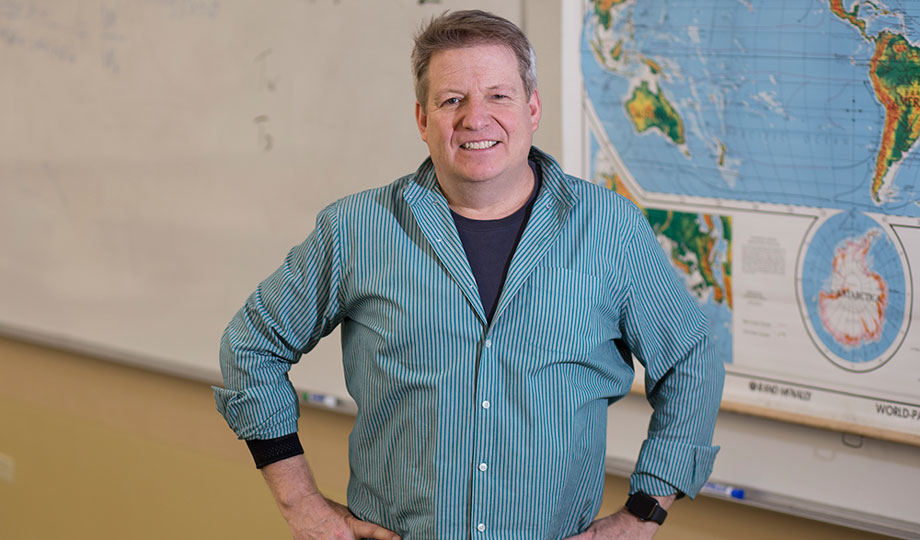 Paul Sirvatka always wanted to be a television weather forecaster. But during a chance teaching assignment in graduate school, Sirvatka found the process electrifying.

"I immediately liked the instantaneous nature of teaching," he said. "It's a little like storm chasing, where you have to make decisions right this second. As I got to know my students, I would listen to their responses. It became so interactive to me and I found that so interesting to figure out what the students were thinking and how they were learning.

"And then I realized that I could make a difference in their lives. I sort of fell into what I was made to be, which was a teacher."

Although he is an accomplished singer, guitar and piano player, Sirvatka's first love has always been the weather.

"I have loved the weather since I was a kid," he said. "My dad and I used to sit in the garage and watch storms come in. I was born with a passion for the weather."

In 1992, Sirvatka called on that passion to begin building a nationally-renowned meteorology program at COD. He started writing competitive proposals for external funding, and between 1992 and 1995 earned more than $325,000 in National Science Foundation grant money. He used those funds to develop premier weather forecasting and storm chasing components in the college's Meteorology program.

Since then, Sirvatka has honed the most comprehensive community college meteorology program in the country. Sirvatka explained that most meteorology programs are designed around the junior and senior years of college, and most will offer one or two courses for freshmen and sophomores.

"Because our mission is different, we can go into advanced detail and offer many courses for our first- and second-year students," he explained. "We give our students the best meteorology experience. For freshmen and sophomores, I would say there is not a better place to learn meteorology than at COD."

In addition, the college and Sirvatka were the first to offer storm chasing education to undergraduates.

Sirvatka and his students plan storm chasing excursions five times a year. While the Midwest is prime hunting ground for such chases, the COD contingent has been known to travel to Texas and even as far north as the Canadian prairies. Two trips are designed for the general public and have included people from California, New Jersey and even Ireland.

"The storm chasing trips are a good experience and learning process," Sirvatka said. "They help people learn how thunderstorms work and how the weather affects them."

More about Meteorology and Earth Sciences