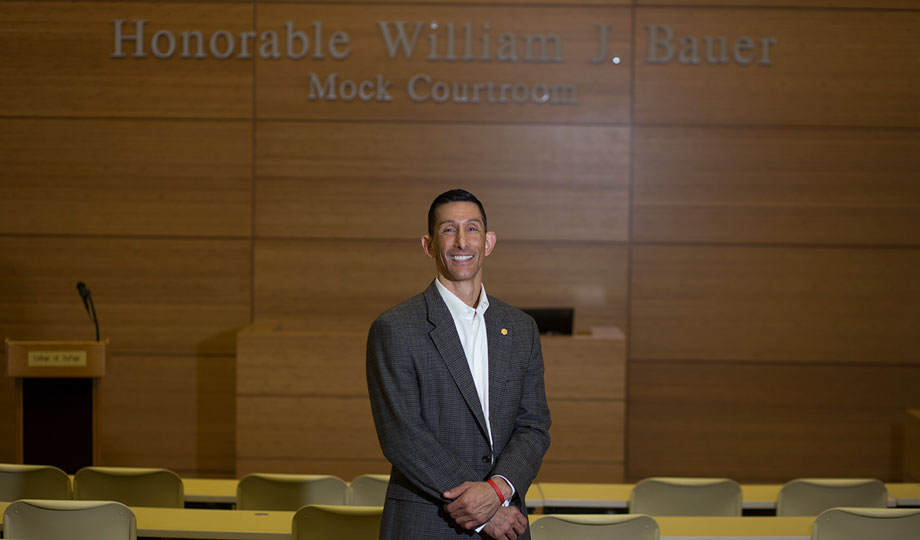 As a youth, Eric Thompson was interested in policing.

"In college, that curiosity developed into a desire to understand crime, social dysfunction and malaise," he said. "My first college-level criminal justice class galvanized my interest."

Thompson worked as a Medicare fraud examiner in Los Angeles while finishing his master's degree at California State University-Long Beach. He then accepted a fellowship at the University of Illinois at Chicago and began teaching at Kaplan University while in the doctorate program at UIC.

Originally, Thompson hoped to secure a job within the criminal justice field. But after earning his undergraduate degree, he became interested in learning more about crime causation.

"Although a teaching career was not immediately a consideration, it became evident that I genuinely enjoyed critical thinking and research," he said. "Teaching became a conduit for learning about criminal justice-related topics and an opportunity to share my enthusiasm about the subject-matter.

"After teaching my first class, I knew that I belonged in the classroom. I immediately recognized that teaching was not just about the subject but rather about leadership, mentorship and personal development."

In 2005, he was hired as an adjunct faculty at College of DuPage and became full-time in 2008. Thompson hopes his students take advantage of the opportunity to achieve both personal and academic success while in college.

"There are opportunities to learn, to activate a social consciousness and to develop a strong sense of personal responsibility," he said. "Students taking my classes learn that life is not fair, that character matters, and that success is not guaranteed but earned. I make a concerted effort to speak candidly to students about the importance of achieving success in their personal life first.

"They should leave the semester understanding that despite the nature of their chosen profession, the work is only what they do, not who they are. It is important for students to recognize that they have the ability to become exceptional and that level of commitment will prepare them for challenges associated with obtaining success within the 21st century workforce. Finally, I hope that students who complete my classes recognize that I have a genuine interest in their personal and academic achievements."