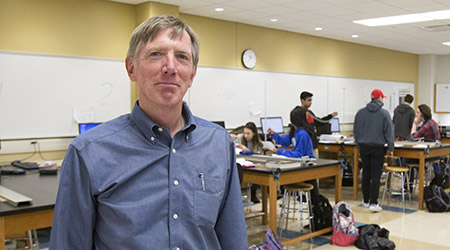 Tom Carter, professor of Physics at College of DuPage, has been named the College-Wide Outstanding Full-Time Faculty Member for 2017-2018.

Representing the Science, Technology, Engineering and Math Division, Carter will receive a $1,000 award from the College of DuPage Foundation, which annually recognizes outstanding teaching achievement.

The Geneva resident earned a Bachelor of Arts from Drury College, a Bachelor of Science from the University of Missouri and a Ph.D. from Duke University. He originally spent seven years as a diver for the U.S. Navy, then worked as a research physicist at Fermilab and as an engineer in the telecommunications industry. While he enjoyed all of these positions, Carter felt a strong attraction to teaching.

“When I first started, I thought, ‘All I need is enthusiasm and knowledge of the subject matter,’” he said. “What I learned is that students are more complex and that each student brings his or her own background and unique needs to class.”

He initially wanted to teach at a small liberal arts college, much like Drury.

“The first year I started at COD, in 2000, I wasn’t sure if this is where I wanted to stay,” he said. “But after a few years, I knew a community college was the place to be. Our sole goal is to support the students, and we have more immediate access to them at a community college.”

Carter has worked closely with his students, promoting and arranging summer internships with national laboratories and research universities. He has helped sponsor and support on-campus initiatives such as the COD Robotics Team, the COD chapter of the Society of Women Engineers and STEMCON, the annual celebration of science, technology, engineering and math that brings thousands to campus. Carter also was a member of the team that founded the Engineering Pathways program that gives engineering students an opportunity to seamlessly transfer to the University of Illinois at Urbana-Champaign.

Outside of COD, Carter is the lead scientist for the QuarkNet science program for high school students at Fermilab and is a member of Fermilab’s science public lecture committee. He has served as a member of the Illinois Articulation Initiative (IAI) physics panel and has been a member and chair of the national Committee on Physics at Two Year Colleges for the American Association of Physics Teachers.

One student who continually cites Carter as a mentor is Marsela Jorgolli, who was named to the All-USA Community College Academic First Team and received the prestigious Barry M. Goldwater Scholarship, the first COD student to receive this national honor. She transferred to the University of Chicago, where she earned her bachelor’s degree, and later earned a Ph.D. from Harvard University.

“Marsela is one of those students who would have excelled in any situation,” he said. “If a student like Marsela goes on to accomplish big things, I only hope that I was a small part of it.”

Carter has yet to tire of teaching and is glad he has made it his career.

“Teaching has certainly been more demanding than I expected, but it’s more than lived up to my initial expectations,” he said. “What I hope is that I make a positive impact on someone’s life. For every Marsela, I also have that student every term in the back of my class on the first day, arms folded and clearly wanting to be elsewhere, who on the last day tells me they learned something. I feel good about that.”

For more about the Physics program, visit www.cod.edu/academics/programs/physics.

College of DuPage is regionally accredited by the Higher Learning Commission. Serving approximately 26,000 students each term, College of DuPage is the largest public community college in the state of Illinois. The College grants nine associate degrees and offers more than 170 career and technical certificates in over 50 areas of study.