Coronavirus (COVID-19) Updates: All COD facilities are closed until further notice. We are available virtually to assist you Monday through Thursday. Read more. Visit cod.edu/fall2020 for information about the fall 2020 semester. 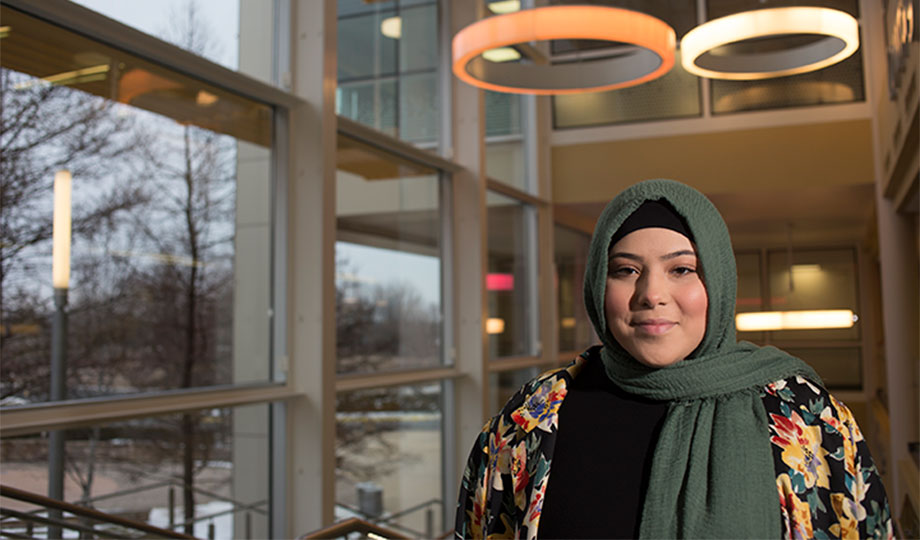 Growing up as a Muslim and Palestinian in America, Amira Abuarqoub always felt the struggle of being marginalized in society.

This led to her desire to speak up and decide to pursue a career in law.

“The older I got, the more I felt compelled to stand up for myself and others who often feel a lack of acceptance and representation, further leading me to seek avenues in which I could do just this,” she said. “For me, giving myself power through education will allow me to do this at greater lengths as well as to the best of my ability.”

Eager to expand her education further, Abuarqoub graduated from high school a semester early. However, she knew it might be difficulty to start as a spring-semester freshman at a four-year school. She turned to College of DuPage, knowing the transition seemed easier and that it was the financially responsible option.

She began taking general education classes and was instantly drawn to the material in her Intro to Political Science class.

“I found myself wanting to know more,” she said. “This interest only continued to intensify as I took more political science courses, making it an easy task to claim political science as my field of study, as I was passionate about the material and how it could relate to and educate me.”

Because she is paying for college on her own, Abuarqoub was grateful to be named a Board of Trustees Scholar, which includes $2,500 per year for tuition.

“This was quite honestly the biggest surprise to me and was the exact jump start I needed as I began the first steps in my college education,” she said. “The Board of Trustees Scholarship expected me to maintain a high standard as a student that is vital to my success and future. One benefit to being a Board of Trustees Scholar was that I was automatically a part of the Honors program, challenging me to learn beyond what I assumed I was capable of. Because of this, I am only allowing myself to pursue my education at the quality and standard that I have experienced at COD. It also motivated me to jump on every opportunity I possibly could on campus, such as getting involved in multiple clubs, events and organizations that only broadened my knowledge and experiences.”

She also received the Rev. Dr. Martin Luther King Jr. Scholarship, which provided an additional $2,000 for her tuition. Abuarqoub was awarded another scholarship through her work with New Student Orientation as an orientation leader and team lead.

“Being a part of NSO had the greatest impact on me by helping me realize that attending COD was more than just a bridge to my next chapter, it was my defining chance to start becoming who I wanted and expected myself to be,” she said. “Through NSO, I got to meet and make great friends who helped increase my activity on campus through clubs and organizations such as Black Student Alliance and Phi Theta Kappa. I also was inspired to start my own club, the Arab Student Alliance, to bring more people of different backgrounds and identities together. Being a part of these clubs and organizations have completed the college experience for me, making me even more prepared to take on my next challenges and experiences.”

After earning her Associate in Arts degree with honors, Abuarqoub transferred to the University of Illinois at Chicago to pursue a bachelor’s degree in political science on the pre-law track. Her ultimate goal is to become a criminal defense attorney.

She is grateful for the many ways COD helped her begin a successful college career.

“College of DuPage was the new beginning I needed after high school to reboot myself and embark on my academic journey,” she said. “I have been able to accomplish so much because of the resources I was given at COD. Academically, I have excelled to new lengths, especially after a limited high school experience. This is because I was cared for as a student better at COD. My counselors, professors and everyone I encountered were more invested in me and my success, helping me ensure that I would be constantly pushing myself to my full potential.

“The biggest piece of advice I can give to students who are considering College of DuPage is to not feel pressured by your peers and make the best choice that benefits your own future and success. As someone who attended a very competitive and overachieving high school, I constantly felt the pressure to attend a university straight out of high school, even though that was not something I felt I would be completely comfortable with. Choosing a university or college with a prestigious name or title will have no benefit to you as an individual if you are not 100 percent in it, ready to take advantage of every opportunity in your path, or prepared for what college life really entails. Attending COD has helped me blossom as a student and realize my capability.”

More about the Associate in Arts degree