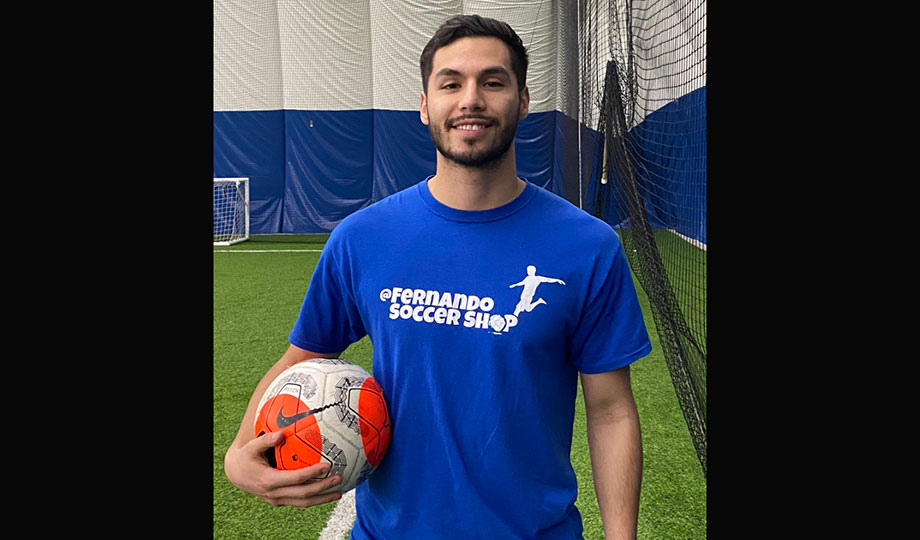 Fernando Alverado was exposed to soccer at an early age.

“I grew up in a Mexican-American household and started playing soccer when I was 10 years old,” he said. “After a season, I began playing travel soccer and have been passionate about the sport since then.”

Alverado initially attended Northern Illinois University, where he competed on the soccer team during his freshmen year. Then he transferred to College of DuPage to study business, and during this time he began to coach.

“I became as passionate about it as playing competitively and began going through my coaching education,” he said.

It was during the 2018 Maker Market at COD that Alverado began to develop his entrepreneurial spirit and saw a way to combine this with soccer.

“I was actually motivated by Professor Peter James when I took his entrepreneurial course and sold official soccer jerseys and cleats during the Maker Market,” he said. “My father collects both items and grew into habitually looking for better alternatives to acquire this official merchandise at a lower cost. After participating in the Maker Market, I realized I should pursue my passion of soccer training and apparel.”

In addition to running his business, he finished his Associate in Applied Science degree and the Consumer Marketing certificate at COD and is completing his final courses for a Bachelor of Arts degree from the University of North Texas.

Alverado is glad that he enrolled at COD and discovered a way to turn his passion for soccer into a career. He encourages students to take courses in the Business/Management/Marketing program.

“Have an open mind to new ideas and beliefs because COD is an opportunity for individuals to grow and gain experience and confidence.”