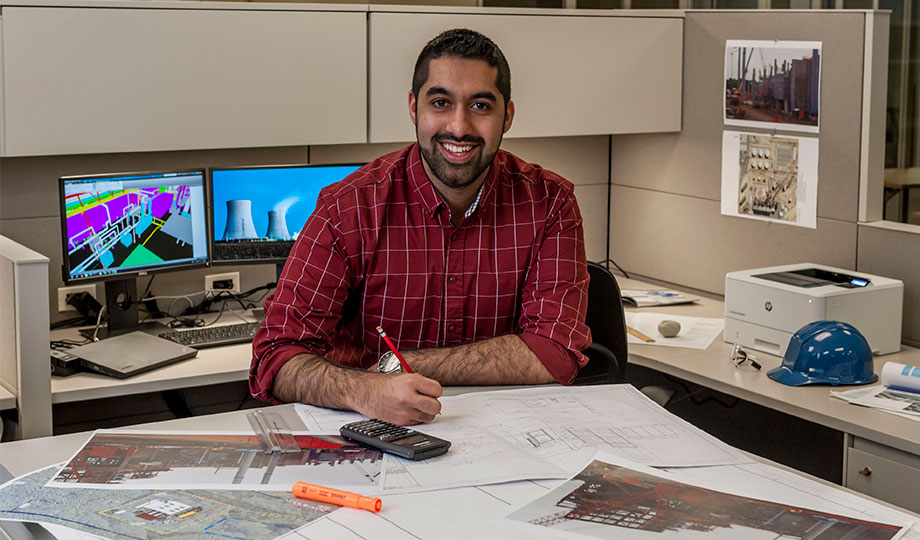 Azeam Anjum majored in engineering. Watch the above video as Azeam talks about his career and the positive impact of College of DuPage.

Azeam Anjum developed an interest in science during high school, where he also enjoyed math and computer programming.

“I liked to relate physics concepts to my interests, such as the application of electromagnetic induction and how it works in an electric guitar,” he said.

After College of DuPage offered him a scholarship, Anjum researched the school and decided to apply. He's never doubted the decision. For example, in 2010, Anjum was one of two science students from College of DuPage to land summer internships at Fermilab. Anjum participated in a project with a re-accelerator that involved inductive output tubes, or IOTs, which TV stations once used to broadcast analog signals.

“I worked with technicians, engineers and physicists who were designing cooling systems for the IOTs in a test facility,” Anjum said. “I learned so much from the people I worked with – Maurice Ball on this project, Kevin Duel on the second project, and my supervisor Frankie Kelly.”

Anjum earned his associate’s degree from COD and transferred to the University of Illinois at Chicago, where he was awarded the UIC Steven M. Pasquerelli Academic Merit Scholarship and the INPO National Academy of Nuclear Training Merit Scholarship, which was based on his performance as an engineering intern at the Exelon Nuclear Power Plant. During his last two semesters, he worked at the UIC Computational Multiphase Transport Laboratory, where he researched CFD (Computational Fluid Dynamics).

Anjum worked for years as a fossil power technologies engineer at Sargent & Lundy, LLC, in downtown Chicago. While there, he was part of a team designing a new generation plant in Kazakhstan that provided power for the nation as well as heat and heated water to a local village.

Now he is a mechanical systems engineer for Exelon Generation at the Braidwood Nuclear Station, which he considers a major source of carbon-free energy for Illinois. His responsibilities include implementing new equipment, new concepts and new techniques to improve performance, simplify construction and reduce costs. He also serves as an Engineering Duty Manager, a rotational position where he acts as an engineering liaison for emergent power plant issues that may occur during his week on duty.

During the past summer, Anjum helped mentor several summer interns by teaching and reinforcing scientific concepts related to their internship project and guiding them in applying those concepts in their real-life projects that eventually will be constructed and installed in the power plant.

In addition to his job, Anjum returned to COD as an adjunct engineering professor for several years. He also speaks during COD’s Explore Engineering night.

“I always jump at the chance to help students because it gives me the opportunity to bridge the gap between school and industry for students,” he said. “I want to show them what they will be able to do after they are done with school and demonstrate the value of what they are learning in college.”

He is thankful for his time at COD and how well it started his collegiate career.

“COD has great opportunities,” Anjum said. “All of the science classes transfer, and I could take upper-level courses. To study thermodynamics at a two-year college is impressive.”

Learn more about the Physics program at College of DuPage