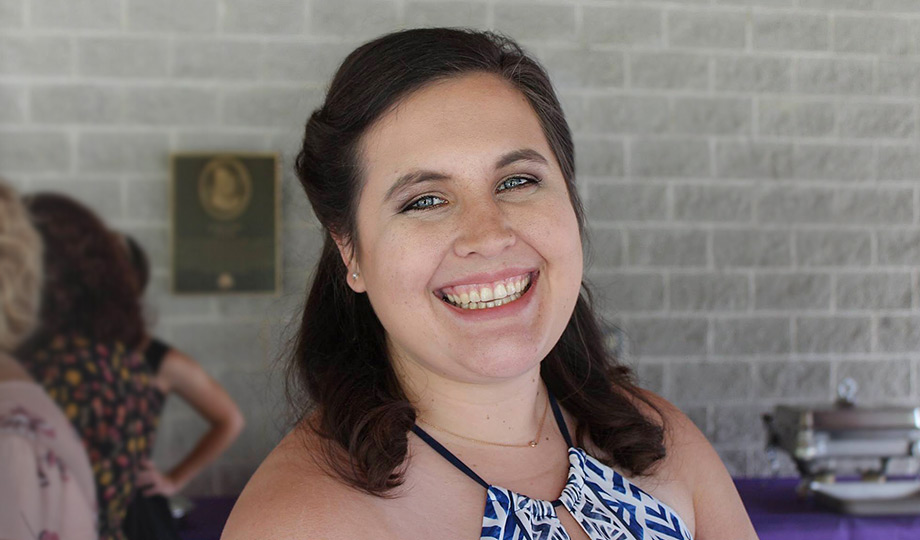 “As I teenager, I had no idea what I wanted to do when I grew up,” she said. “I had a lot of ideas, but none of them were realistic or financially responsible. My father is actually the one who told me I should be a nurse. He said it would be a perfect fit. Naturally, I disagreed with him, but a little more research into what nurses actually did and their impact on patient care, and I was hooked.”

While she was still deciding on a career, Bajek enrolled at College of DuPage. Her two older brothers and sister-in-law attended and were successful after graduation, so it was the right option for her.

In addition to the family legacy of COD graduates, Bajek joined the Forensics team because her brother and sister-in-law met while competing for COD. She also did theater in high school, so it was a smooth transition.

“I heard great things about the coaches, Lauren Morgan and Chris Miller, and my family knew that I would instantly have a support system at COD if I joined the team,” she said. “My team won the state competition in 2009 and many national awards in 2010. I was the office manager of the team during my 2010 year, which gave me critical leadership skills that I have built upon to this day. I currently still coach for the team and judge for our annual tournament when I have free time from nursing.”

After earning her Associate in Science degree, Bajek attended Northern Illinois University and received her Bachelor of Science in Nursing. While at NIU, she served as vice president of the Student Nurses Organization and as president of the Student Nurses Association of Illinois. She used the public speaking skills she gained through her time competing for COD to better serve in both roles.

Bajek currently works as a nurse in an endocrinology clinic at Northwestern Memorial Hospital in Chicago. While at NMH, she served as chair of the Nursing Healthcare Policy and Procedure Subcommittee and enjoyed many leadership opportunities. She lobbied twice in person in Springfield for the rights of nurses, and during a sit-down conversation with Illinois Attorney General Kwame Raoul, she advocated for bachelor’s degree-prepared nurses in the hospital setting.

In 2018, Bajek was highlighted in the hospital’s Nursing Annual Report video for her advocacy work. The experience allowed her to draw upon skills she learned while on COD’s Forensics team.

“Nurses don’t think that public speaking or communication will be an important or necessary part of their job, so it is not focused on in nursing school. This video and the different speeches I have had to give while being a bedside nurse prove that otherwise,” she said. “When I was getting filmed, I did not feel nervous. I felt calm, collected and was able to articulate my thoughts. While advocating in Springfield, I was able to talk to representatives and share my opinions on different healthcare bills without getting flustered or stumbling over my words. I was able to have a confident conversation throughout advocating and filming, and none of that would have been possible without my training as a member of the COD Forensics team.”

While she enjoys her work as a bedside nurse, Bajek is keeping her options open and currently is looking into a master’s program.

“My husband says with how much fun I had at the capital talking to representatives and about legislation, I’ll either be a nurse lobbyist or maybe run for Congress one day,” she said. “My dad had it on the nose that I should be a nurse, so maybe I should ask him for career advice again!”

Attending COD was one of the smartest decisions she made, and Bajek encourages others to do the same

“I would not be where I am today without my education from COD,” she said. “When I struggled with my second anatomy class, my professor spent hours of time with me in her office ensuring I would get a grade that wouldn’t affect my admission into nursing school. When I had to take the class a second time around to get a better grade, I felt more confident and that I had a better chance. When I finally got into a nursing program at a four-year college, I felt like I was better prepared to handle the rigorous curriculum of nursing because of the dedicated professors at COD who knew a strong GPA affected the rest of my education.

“My advice for students considering COD would be to stop considering and just register. Looking back on it now, there’s no other choice than COD. You have small class sizes, extremely dedicated and intelligent professors, and a financially stable start to your college career. I have lifelong friends, a career and even a husband because of my choice to attend COD. Looking back, I would not have done anything differently.”

More about the Associate in Science degree