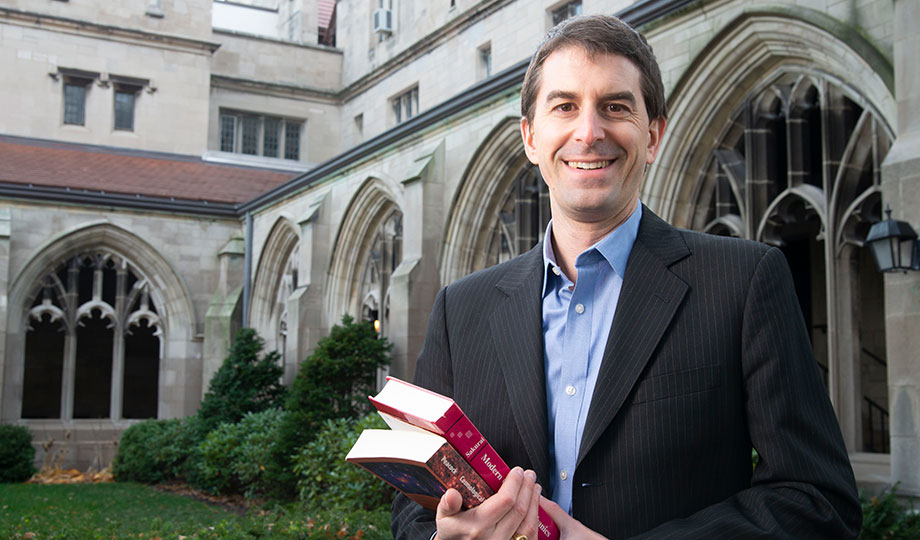 Having worked for many years at the U.S. Department of Energy’s Argonne National Laboratory,

Bernstein was part of the Dark Energy Survey collaboration, which includes institutions from the U.S., Chile, Spain, the United Kingdom and Brazil. His group at Argonne also was leading the effort to determine what strategy the DES should use to search for supernovae in the night sky.

“Understanding dark energy has been described as one of the most important challenges of modern science,” he said.

Bernstein explained that in 1998, distant supernovae of a specific subtype were discovered to be fainter than they would be if the universe contained only matter. The leading explanation is that 75 percent of the universe is made up of a mysterious or “dark” energy that has accelerated the expansion of the universe, resulting in these supernovae being further away.

He enjoyed his study of dark energy because of its “ultra-mysterious nature” and its importance to understanding the fate of the universe.

Bernstein was first interested in science as a child, when he’d look up at the night sky and wonder what was going on “up there.” He also was intrigued with stories about his grandfather, who was an atmospheric scientist. The work of his aunt, a marine biologist, was also inspirational. The homeschooled Bernstein knew he wanted to be an astronomer, and he and his parents saw COD as a good place to begin.

“I benefited greatly from the small class sizes and personal contact with the faculty,” he said. “Direct interaction with the faculty without going through teaching assistants was especially important. The fact that faculty engage students in research meant that the faculty members I studied under were very well positioned to guide me toward a career in science.”

Bernstein wanted to step out of research and applied his knowledge toward helping the public understand science. He became the Communications Lead for the Physical Sciences and Engineering Directorate at Argonne, which consisted of five research divisions and five centers/user facilities. He is now back at the University of Chicago, where he completed his MBA in Managerial and Organizational Behavior at the university’s Booth School of Business. He currently directs and oversees all aspects of academic business, research and education administrative operations for the Department of Organismal Biology and Anatomy with the Biological Sciences Division.

With a career that combines research, academics and entrepreneurship, Bernstein enjoys guiding people to reach their full potential.

“Leveraging my academic research experience, I lead administrative staff to find deeper passion in supporting an elite university academic mission, resulting in higher morale and reduced turnover,” he said. “This is the culmination of my long-standing goal of being director of something meaningful.”

Learn more about the Physics program at College of DuPage.