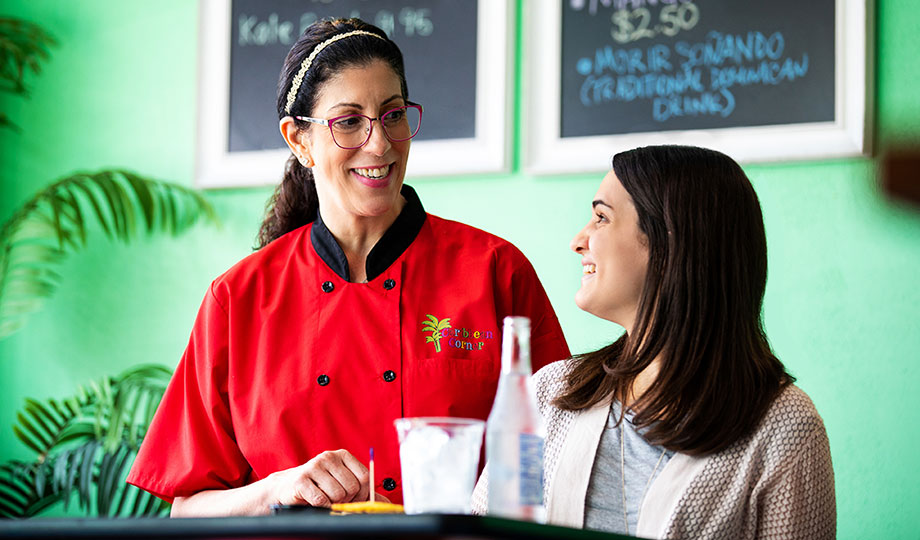 Raquel Black majored in culinary arts. Watch the above video as Raquel talks about her career and the positive impact of College of DuPage.

Raquel Black was climbing the corporate ladder. A 25-year health care industry veteran, she had a substantial salary, health benefits and a retirement plan. By all measures, she was extremely successful in the professional world.

But while working in corporate America, she found herself daydreaming about cooking.

Laying awake at night, Black would create new dishes and ingredient combinations as an idea began to take hold: going to culinary school and opening a place of her own. It was something she couldn’t ignore and while she wasn’t sure what the outcome would be, she knew she had to try — if not for her, for her late mother.

“I grew up in a family that loved to cook, from my grandmother to my mother,” she said of her childhood spent in the Dominican Republic and Miami. “I used to peel garlic, and I fried my first chicken when I was 12 and a half, following every step that I saw my mom do. It’s always been so enjoyable.”

Black’s mom had always wanted to open a restaurant of her own. However, because of circumstances, lack of funds, lack of knowledge—and a little bit of fear—she held back.

Black knew she could make both her dreams and her mother’s dreams come true. At the age of 42, she walked into College of DuPage and enrolled in the Culinary Arts certificate program.

“I felt so old the day I registered for classes,” Black said with a laugh. “One student registering for classes told me they were born in 1988 and I almost fell over! What was I doing here? Was I too old to be doing this? I panicked.

“However, on my first day of classes, I felt right at home. The instructors were nice but rigorous, which is exactly what I needed.”

Black’s love for cooking only flourished while enrolled in the Culinary Arts program. She also realized that if she ever wanted to open a place of her own, it was now or never. Armed with increased confidence in her skill sets, she walked into her boss’s office and quit, believing in her gut that if she made good food and provided good service, these would be the keys to success.

Black picked wisely. Caribbean Corner, specializing in Cuban, Puerto Rican and Dominican cuisine, opened for lunch on Sept. 26, 2014, in downtown Downers Grove. A menu of homemade sandwiches, soups and sides soon expanded to dinner and in 2016, Caribbean Corner moved to a larger space that now seats 35 customers inside and 20 outside on a patio.

“The food is not 100 percent traditional, as I’ve put my own unique twist on each dish,” she said. “I call it Latin with a flair. My dishes are very flavorful — you can taste the onions, peppers, cilantro and garlic. My favorite is Ropa Vieja, a Cuban dish which I offer at dinner. It’s braised flank steak that is simmered in tomatoes, white wine and seasonings, and it goes well with black beans and rice.”

Black also added healthier options, including a new kale bowl that has gained popularity with her customers.

“You can top it off with one of our proteins, couscous, black beans, onions, cumin, lemon, avocado, dates and tomatoes. You still get the Caribbean flavors but a healthier version,” she said.

While Black fulfills her dream cooking unique and flavorful dishes, owning and running a restaurant doesn’t come without its challenges.

“Every day is a new struggle and some days I want to pull my hair out, whether it’s managing a catering order while still serving our customers, a broken piece of equipment, a vendor order discrepancy, running out of an ingredient — and the list goes on and on,” she said. “Every day is chaotic. But you will always have a struggle. It’s how you overcome that struggle that makes or breaks you.”

Black recalls getting a call to cater a 300-person wedding during Caribbean Corner’s first year. While initially considering backing out, COD Baking and Pastry Arts Instructor Donna Wagner encouraged her.

“I called Donna and told her there was no way I could do that big of a catering order. But she immediately cut me off and said I was ready for something like this and that she would even help me plan it out, and she did. I relied on her for her expertise.”

Black and Wagner are now lifelong friends, with Wagner employed as Caribbean Corner’s pastry chef. Black remembers Wagner urging her to enter a cake decorating competition as a student, despite Black having little to no experience in baking.

“The night before the competition, I was rolling out fondant and it kept breaking. I called Donna in tears. She told me to come over to her house, but she was very clear she wouldn’t help me but would guide me. She taught me that it’s OK to fail. That’s how you learn and that’s what eventually makes you great.”

Such lessons have stayed with Black, who credits a lot of her success to Wagner and the Culinary Arts program at College of DuPage.

“The Culinary Arts program grew my knowledge of cooking and the industry exponentially. I wouldn’t be here today without the faculty support I was given,” she said.

“Raquel was a student who always showed a passion while creating in the kitchen,” he said. “Her dedication and commitment to her education and industry is why she is so successful.”

As for the future of Caribbean Corner, Black thinks they hit their sweet spot. Ideally, she would like to focus more on catering, but for now, she is content and focused on her customers.

“I strive for an atmosphere where everyone is on a first-name basis and I know what they like,” she said. “I like having that rapport with customers because that’s what I like about a business where I’m a customer. I want them to feel at home with us.”

More about the Culinary Arts program