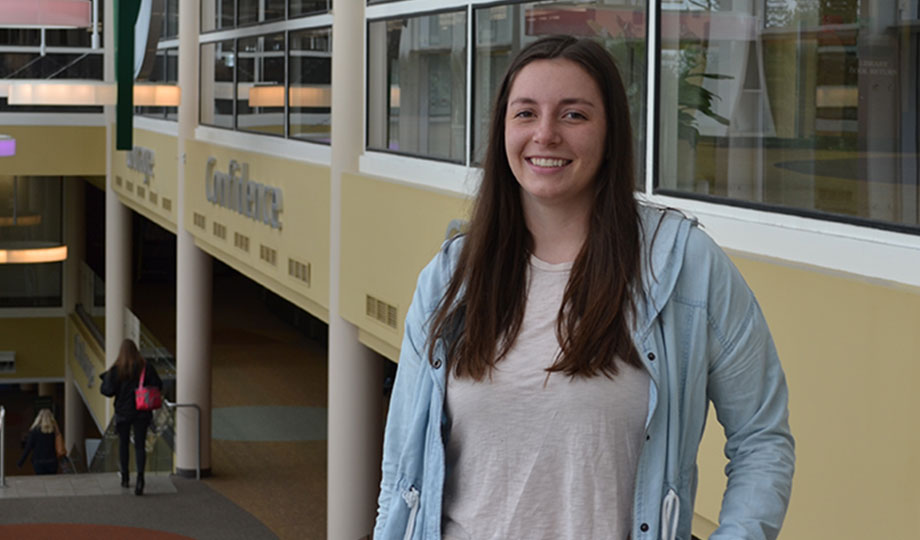 Grace Brannen became interested in special education during high school when she was introduced to a peer tutoring program.

“I would spend my day in English class with students with disabilities and help them with their work,” she said. “This led me to join the club Best Buddies, which is when I knew I wanted to be a special education teacher. Seeing the students every day was something I looked forward to because they always put a smile on my face. There is truly never a dull moment with them.”

When it came time for college, Brannen initially attended a university but left after a few weeks because she did not like it. Not wanting to wait a semester to start again, she enrolled in 12-week courses at College of DuPage. It was an affordable option and, after experiencing the quality of education firsthand, she stayed to finish her associate degree.

While at COD, Brannen earned the Study Abroad Scholarship from the COD Foundation and took advantage of a semester abroad opportunity in France.

“This was helpful because it covered my planes tickets to and from the U.S.,” she said. “I knew going into college that I wanted to study abroad. It is expensive and I had been saving up for it since high school, so I was prepared to cover most of my own costs. The scholarship really helped and saved me money which I’m very grateful for.”

Brannen took four years of French in high school, but it didn’t fully prepare her for the experience, which included her playing with the club soccer team Pau FC in the town where she stayed.

“I reached out by calling the coach the first week I was there,” she said. “My French was rusty but we communicated and I made it to a practice and tried out for the team. We had games every weekend either in Pau or in other towns like Bordeaux. I made amazing friends on the team and I still keep in contact with them. All of the girls and coaches spoke French so this was a full immersion experience.

“I learned a lot about the culture and learned how to make traditional meals with the girls. One of my favorites was Raclette, which contains potatoes with cheese and meat typically made in the winter. This was a huge commitment because we would practice two or three times a week and have games on the weekends. I am really thankful to the coach and team because they provided me with team gear which I got to bring home and still wear. I can’t explain in words how thankful I am and how important that team is to me.”

After earning her Associate in Arts degree and graduating with highest honors, Brannen transferred to Illinois State University, where she participated in a fellowship called STEP-UP (Summer Teacher Education Partnership for Urban Preparation), a four-week teaching and community program for pre-service teachers. Students are assigned partner neighborhoods in Chicago and fully immerse themselves in those communities.

“The program was virtual, and the organization I partnered with was America SCORES Chicago,” she said. “I had a host mom who lives in East Garfield Park. We talked several times a week, and she spoke about the different community assets and her experiences living there. I tutored three elementary-aged students virtually and assisted with creating videos and activities for their virtual summer camp that were posted on Facebook and Instagram. In the evenings, I attended professional developments about equity, social-emotional learning, co-teaching, technology in the classroom and many more topics related to education, Chicago and racial injustices.”

Brannen is now teaching at an elementary school on the west side of Chicago and works on life skills with her students, who have low-incidence disabilities. Due to her efforts, she helped to secure a donation of desks for her classroom from Buddy’s Helpers, a nonprofit for which she volunteered as a student-athlete in high school. Brannen also coaches girls’ soccer at the school and with America SCORES Chicago, continuing her partnership with the organization.

Her goal is to teach special education for high school students and coach the school soccer team. With her experience studying abroad, she also would like to look into international teaching careers.

Brannen is glad she attended COD and encourages all high school seniors as well as anyone looking to earn a two-year degree to enroll.

“There was a lot of pressure to go to a four-year college, and everyone was expected to make that decision by senior year,” she said. “I never planned on going to COD because there is a stigma associated with it. When you say the words ‘community college’ in the suburbs of Chicago, some people do not think it is good enough because it is a community school. But after I started taking classes, I was so happy that it was part of my journey. I also was prepared and able to jump right into my major-based education classes at Illinois State University smoothly. The professors I had at COD were very dedicated to their students. I know that I can still reach out to them if I have any questions or concerns.

“College of DuPage was a great start to my college career and I got a great education. I was so focused on going away that I didn’t realize the resources I had right in front of me. So I would say to others to just give COD a chance. It’s an amazing school with amazing people.”