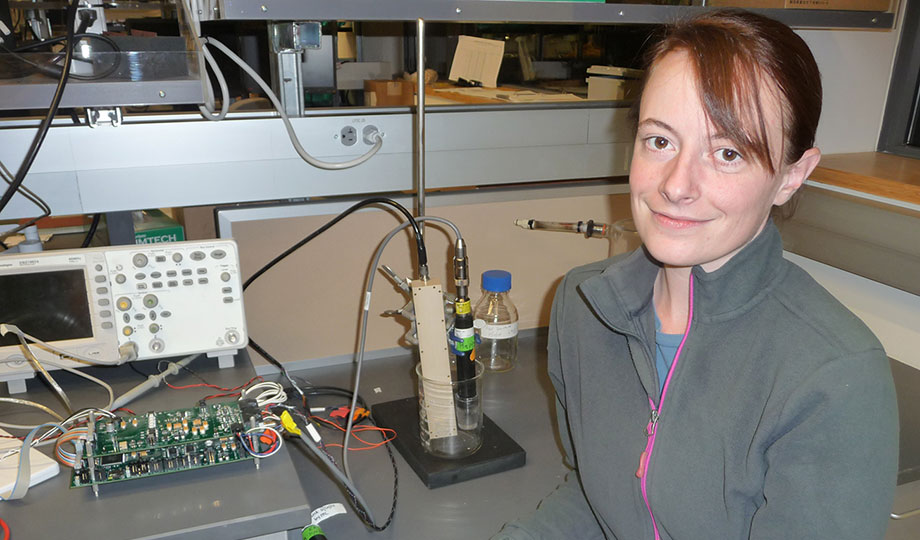 Ellen Briggs has taken her studies from the confines of the classroom into the vast expanse of the world’s oceans.

Before attending COD, Briggs worked as a ballet dancer for the Colorado Ballet and later owned a café. It was her experiences as a small business owner that gave Briggs the confidence to return to school for college-level studies.

When she signed up for classes at College of DuPage, she had no idea that her studies would lead to conducting research while traveling by ship around the world.

“At the time, I did not imagine ever reaching the level I am at today,” Briggs said. “My initial purpose of attending COD was to test the waters and see if I had what it takes to obtain a higher-level education. I had home schooled myself for the last two years of high school while I was training for ballet, so I didn’t anticipate going to college.”

Briggs said the dedication of the professors at College of DuPage, and particularly the mentoring of Chemistry Professor Richard Jarman, Ph.D., provided the inspiration and support to propel her further into her studies.

“I didn’t really know much about chemistry, but I was fortunate to have taken general chemistry with Dr. Jarman,” Briggs said. “He is primarily responsible for inspiring me to pursue advanced education in the sciences and for providing all of the resources to excel at such an early level.”

While at College of DuPage, Briggs was one of a select group of students chosen to serve an internship at Argonne National Lab with the URC. She was later accepted at the University of Illinois Urbana-Champaign under full scholarship as an Illinois Promise Scholar. She excelled at her studies and, based on her previous research experience as a student at COD, Briggs was able to enter labs as an undergraduate research assistant.

“The NSF GRFP is a very prestigious award that is having a profound significance in my academic path and future career,” Briggs said. “No words can explain how I feel about receiving an award of this level given my background.”

Briggs was accepted into the Scripps Institute of Oceanography in La Jolla, Calif., where she earned a Ph.D. in Chemical Oceanography. She used the grant to help fund her thesis project of developing a sensor that measures total alkalinity and pH in the ocean. Currently she is still at Scripps performing research as a Postdoctoral Scholar.

One of the highlights of her career so far was a research trip to the southern hemisphere testing total alkalinity of oceans. Briggs said that the prime reason for choosing this particular project was because of its broad reach across a variety of disciplines.

She sailed from Hobart, Tasmania, to the Ross Sea of Antarctica and then sailed north to port at Tahiti. En route, Briggs and her fellow researchers collected seawater samples ranging from the ocean surface to nearly 5,000 meters deep.

Briggs said she loved being at sea, but the trip did pose some challenges.

“It takes a certain type of personality to live in small quarters, work 12 or more hours a day, seven days a week for several weeks, and not see land or have certain amenities, like fresh veggies,” Briggs said. “In the southern ocean, the seas were pretty rough and the chairs in the conference room would slide during our science meetings as the ship rolled. All of our equipment, including coffee cups, had to be tightly secured to the lab benches and it was tricky at first to stand upright while working.”

Briggs said that traveling through the rocky waves was exciting and compared the experience to riding a roller coaster. She added that the rough waters provided an additional perk. “The roll and pitch of the ship rocked me to sleep every night and I got the best sleep I’ve had in a long while.”

Despite the long hours, Briggs said that there were opportunities for entertainment among the researchers on the ship, including cribbage tournaments, movie nights and a competition between two teams using exercise equipment to run, bike or row the most meters while on the ship. Briggs added that she greatly enjoyed the work, describing the sampling of seawater as a “fun social activity.”

“We would blast music and goof off as we sampled water and dreamed of the food we would eat when we got off the ship,” she said.

Briggs currently is an assistant professor at the University of Hawaii at Manoa in the Ocean and Resources Engineering Department. She credits COD with providing the initial spark and foundation on which her continued success has been built.

“COD provides an amazing stepping stone to great opportunities in academia and career advancement,” Briggs said. “I honestly feel that I would not have stuck with this intensive academic route without the amazing professors I had at COD. The classes were small, which helps, but every professor I had was very dedicated to their field and had great desire to teach. From my later experiences and stories from others, I have come to realize how much I appreciate the devotion and passion the professors at COD had in teaching.”

Learn more about the Chemistry program at College of DuPage