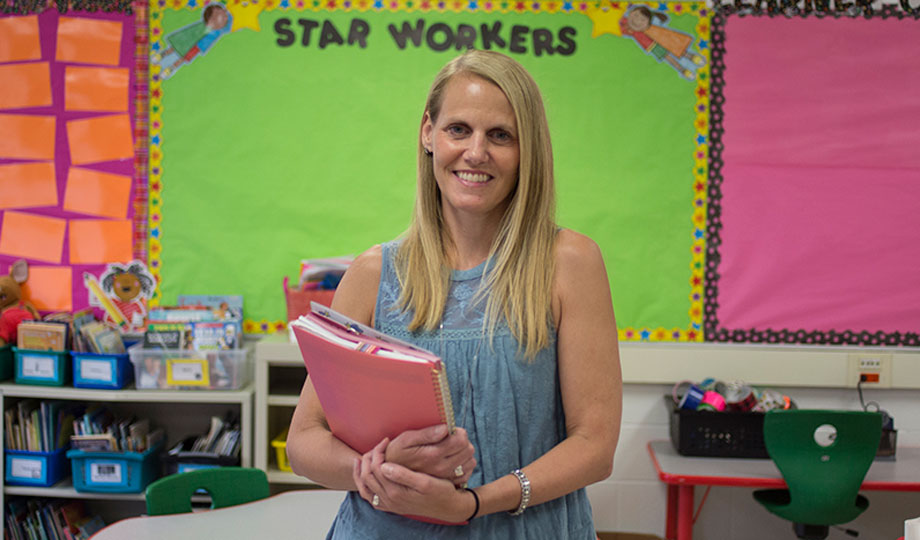 Watch the above video as Lisa talks about her career and the positive impact of College of DuPage.

Growing up, Lisa Buchholz enjoyed the time she spent babysitting kids in her neighborhood.

Her family noticed how well she worked with young children and suggested that she pursue a career in education. However, Buchholz did not believe it was the best path.

“I don’t know if it was because of the experience I had as a student in grade school, but it was tough for me to even think about being a teacher,” she said. “It just didn’t sound like the right thing for me.”

After graduating from high school, Buchholz enrolled at College of DuPage to stay close to home and complete her general education requirements while deciding what to do long term. She recalled facing criticism from her peers for choosing to attend a community college.

“I had to endure critical comments from people I graduated with,” she said. “It made me so angry that this stereotype was out there. To me, it made perfect sense to get an associate degree and then transfer to another school.”

As a student at COD, Buchholz loved her classes in business and marketing and thought her career path was set. However, taking a child care class to fulfill a general education requirement completely changed her plans.

“I reluctantly took the course, which required me to observe in a preschool or daycare center,” she said. “I selected a school and my entire focus changed through that experience. If I had taken a child care course where I only had to read the book and go to class, I never would have become interested in teaching.”

Buchholz said that experience, along with a number of other outstanding courses, not only provided her with career guidance but also helped her get a foot in the door and eased her transition to a four-year university.

“Next thing you know, I was being offered a job because they had been watching me through a window that looked like a mirror to us in the classroom,” she said. “I ended up loving being with children and entered North Central College in Naperville as an Elementary Education major. Academically, I was totally prepared by that time and the move was seamless.”

After finishing at North Central and becoming the first woman in her family to earn a degree, Buchholz began working for Glen Ellyn School District 41, first as a reading/math aide at Forest Glen Elementary School. Then she landed a first-grade position at Benjamin Franklin Elementary School, where she stayed for 10 years.

Once her own children were school age, Buchholz wanted to be at their school so she transferred to Abraham Lincoln Elementary School, where she currently works as a first grade teacher. She mostly has taught first grade but also second and third.

After more than 25 years of teaching, Buchholz was recognized for her outstanding work in the classroom when she was honored with the prestigious Golden Apple Award for Excellence in Teaching and Leadership in 2018. The award is presented annually by Golden Apple, a nonprofit organization that develops and supports teacher and school leader excellence.

She was genuinely shocked when she won the award.

“I felt like it was something that other people win,” Buchholz said. “I kept saying to myself, ‘This is not something I’d win. I’m just a regular teacher.’ I was stunned. It’s not that I don’t feel like I’m a great teacher, because\I put a lot of time into this job and I love it. I felt like the nomination was rewarding enough but this is like winning the lottery.”

During her acceptance speech, she thanked COD for two reasons in particular. Not only did the College lead her into a successful career in the classroom, but she also felt it was necessary after reflecting on the criticism she received when she enrolled at the College years ago.

“With so much of the stigma that people attach to community colleges, I felt like I needed to give COD a big high-five,” she said. “College of DuPage got me on my career path and served the purpose it was intended to serve. I went there to find what I wanted to do in life and COD did that for me. I honestly owe this career to them.”

The career that COD helped Buchholz find has since been introduced to others in her family. Her daughter, Kaila, is now a teacher, and Buchholz said Kaila’s passion came from spending so much time in Buchholz’s classroom as a child.

“Kaila always loved helping me in the classroom,” Buchholz said. “Beginning when she was about 3 or 4, she would make little paper dolls of kids in my class. My classroom felt like home
to my own kids and Kaila always had an interest in teaching because she spent so much time there.”

In spite of her extensive experience as a teacher and being recognized for excellence in the classroom, Buchholz is still figuring it all out and continues to use lessons learned at COD to engage her students.

“I’m constantly changing and revising what I do and the approaches I take,” she said. “Starting o in that early childhood atmosphere helped me stay grounded. I look back on the days when we were doing activities such as finger painting and I’m reminded that I need to continue to make learning fun.”

Buchholz’s advice to young students considering a community college for any reason is to have pride in their decision.

“You should never have to feel bad about that,” she said. “College of DuPage found me my career and it’s done the same for so many others. Every single class that I took at COD was quality, and I felt very ready to enter my final two years of college once I earned my associate degree. COD was an excellent choice for me.”