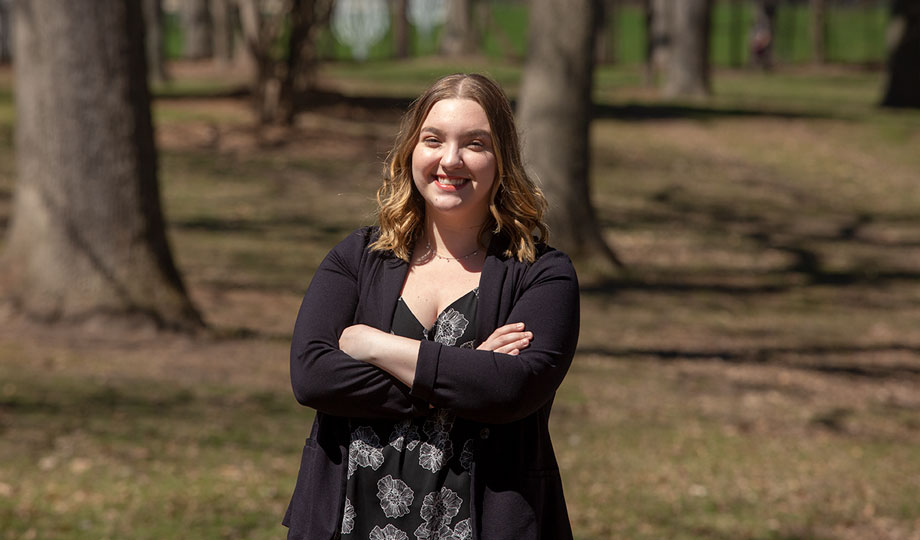 Courtney Cechini originally chose psychology as a major because she was intrigued by the human brain.

During her first semester at the University of Illinois at Urbana-Champaign, she changed her career focus when she read an article about sign language and mental health.

“After learning how it can be difficult to have interpreters in the room during mental health appointments and therapy, I decided I wanted to learn ASL (American Sign Language) so that I could provide therapy for deaf individuals. After being immersed in the deaf community, I realized that I wanted to change my major to interpreting.”

While the University of Illinois offered ASL, the program didn’t include an interpreting training component. Cechini discovered the ASL Interpreting program at College of DuPage and, impressed by what it offered, decided to transfer.

Her hopes of being immersed in deaf culture were realized at COD. For two years, she was president of the ASL Club, for which she helped organize at least one event every month for ASL students to practice their signing. She also began coffee chats at the Starbucks on campus that attracted both ASL students and the deaf community.

“I loved being involved on campus,” she said. “I had the opportunity to do hands-on interpreting in real-world situations, which really improved my skills and understanding of deaf culture.”

“There is no better feeling that a student telling you they used to fail quizzes and are now getting higher grades, or being told by a student that they finally understand a really difficult concept due to your tutoring. It was an amazing adventure for me.”

If you do not know where you belong, COD will guide you and help you find yourself and your calling.

In 2019, she was elected to a two-year term as the student representative for the Illinois Registry of Interpreters for the Deaf (IRID), through which she is involved with conferences, workshops, clubs, expos and entertainment events. She also is the liaison between the IRID board and students currently enrolled in interpreter training programs across the state.

“We are always coming up with new ideas to be more connected to students and help guide them through their program,” she said. “This position has allowed me to reach students from all over the state and give them the access and advice they may need to be successful in their programs. It has been quite a learning experience, and someday I would like to become an IRID board member.”

In 2020, Cechini earned her Associate in Applied Science and was named one of COD’s Outstanding Graduate finalists. She plans to take her state tests to become a licensed interpreter and begin working her way up to medical and mental health interpreting.

Eventually she would like to return to higher education as a teacher, perhaps at her beloved alma mater, COD.

“If you do not know where you belong, COD will guide you and help you find yourself and your calling,” she said. “The ASL Interpreting program is phenomenal and provides you with so many opportunities. I know that if it were not for the amazing instructors and the curriculum they built, I would not be as ready as I am to enter the interpreting community. They whole-heartedly cared about me and my goals. They believed in my success and have pushed me to get there. Thank you, COD, for doing something very right.”