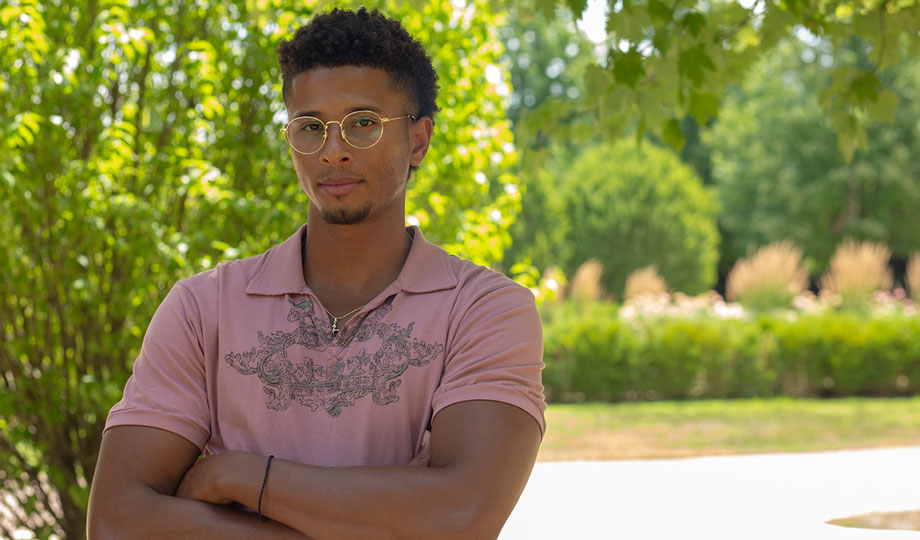 One of Paris Dunlap’s goals was to graduate from college with a minimum amount of debt. It’s what initially led him to College of DuPage.

“It was just my mom and me, and she didn’t have the money to send me to a four-year university even with scholarships, loans and grants,” he said. “I realized I could save so much money if I attended COD, and I discovered that great opportunities were awaiting me.”

One opportunity was his major. Although Dunlap originally decided to study engineering, he switched to education and hoped to combine that with his love of basketball, which he played at COD as a member of the men’s team. Another opportunity was receiving the Freshman Foundation Scholarship for new students with single parents.

“The $1,000 really motivated me to be successful not just in college but in life,” he said. “I figured I should at least attempt and apply for the scholarship, which paid for book fees and two of my classes. It was really a relief to my mother and I because it allowed me to cancel my loans, which made our lives more comfortable.”

The professors were just amazing and actually cared about me as a student and as an individual.

Dunlap earned his Associate in Arts degree with a 3.1 GPA and transferred to Illinois State University, where he initially majored in Middle Level Teacher Education but switched to a double major in Economics and Interdisciplinary Studies-Human Education Sequence. Having earned his degrees, he worked as a Sales Service Representative for Nabisco and returned to COD as a Career and Technical Education program support assistant. He is now a compliance analyst for Ernst & Young.

“I’m very excited about the next chapter in my life and what the universe has in store for me,” he said.

Dunlap was happy for the opportunity to focus more on his academics rather than on college expenses at COD, and the educational value far exceeded the cost.

“My spending at COD compared to another student at a four-year university was significantly different because I still lived at home 15 minutes away from campus,” he said. “COD also taught me about the real world, because the professors have high expectations of their students and set standards of discipline which are very important in prospering in today’s society. The professors were just amazing and actually cared about me as a student and as an individual.

“In the beginning, I didn’t know if COD would be the fit for me, but in the end I am glad I came. People make community colleges seem as if it's the end of the world, because it’s not a four-year university. The amount of money that is being saved, the endless friendships that are being developed, and the various types of professors in my opinion outweigh a four-year university any day of the year. It was a blessing to have an elite school like College of DuPage 15 minutes away from my house.”