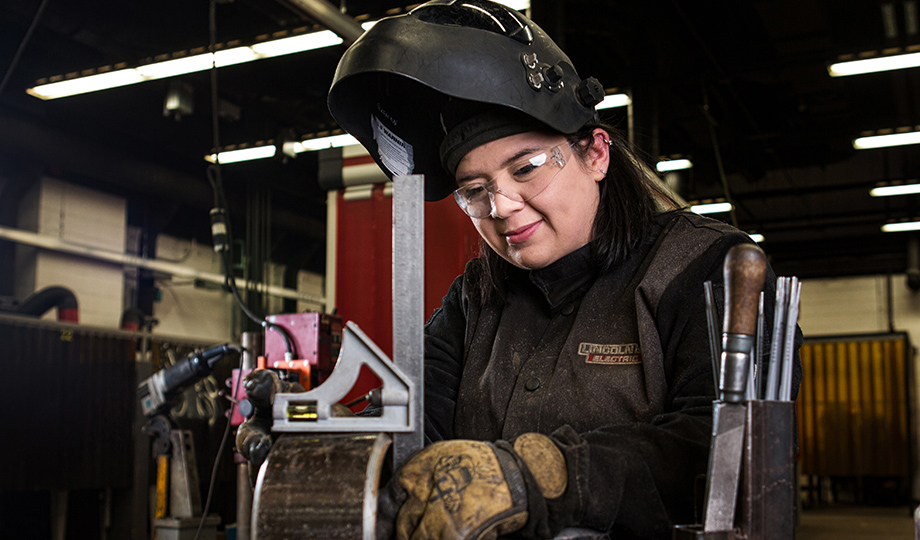 “I came to the conclusion that I wanted a hobby that relaxes and yet challenges me,” she said. “I’ve always wanted to weld and it seemed everyone and their moms welded. My biggest influences were when my friends and I were part of a bike group that would chop up old bikes and build new ones in different length, heights and sizes. The guys that welded were able to create more complex designs. The hobby moved into numerous projects that became more intricate and involved in different mediums, including metal work. Then the jeep obsession kicked in full blast and now all I want to do is make custom parts and racks and whatever I can come up with for my jeeps.”

She began taking welding classes at College of DuPage one at a time in order to have fun. However, it turned into more than that.

“I already had a degree in another field and was actually really good and successful in it. But I felt like I was misplaced,” Guzman said. “The idea of starting over fresh after all this work and success was a difficult one, and it was hard to cope with the thoughts that I didn‘t really fit into my field. In fact, when I first started taking welding, I was saying to myself, ‘I will just do it as a hobby whenever I have the money, and if I do so long enough, eventually I can apply all those classes toward something.’”

Guzman has certainly done that, having completed the Welding certificate. She selected College of DuPage because she knew it could provide the flexibility needed to fit courses around her work schedule.

“The Welding program had the certification I needed to get into the business,” she said. “It is also well-known and connected to numerous companies and unions that come by to recruit and speak to the students about career options. Welding varies vastly over numerous occupations, so it’s nearly impossible to not find something you are comfortable in. The skills you develop can even apply to your personal life. You can freelance or create your own business if you’re open to the idea.

“I had some great teachers who helped me with everything from financial aid to resumes to really getting me to believe in my skills. They are the single greatest influence I had in making this possible.”

“I was having trouble financing my studies because I was not eligible for financial aid. I was paying for classes out of pocket and wasn’t even thinking about a degree. If you ever paid out of pocket, it quickly adds up and limits you to which classes you should focus on taking,” she said.

“When I was introduced to the scholarships, I didn’t think I would actually get anything. I have applied for scholarships outside of COD but wasn’t eligible for a majority of them or simply wasn’t awarded one. I thought it couldn’t hurt if I tried, and the process was easier than I expected – it felt odd, almost too easy. Then the day came when I got my emails about the awards I didn’t win and I was OK. Then came one saying I was awarded the Returning Adult and I was excited just with that one. I actually didn’t expect to win the Christopher Drop Welding Scholarship, so I was completely floored when I did.

“Here I was debating which class I should take or if I should even take a class the following semester. In under a week, I had enough to take four classes with books for the whole semester and have some left over for the semester after. It was the sign I was asking for that validated my decision to go back to school.”

Now in Nevada, Guzman completed several of her Sense certifications and worked with the leader of a local bike club who opened a custom and modification bicycle/DYI chop shop. She also created custom yoga/hammock swings.

She is now with UA Local 525 Plumbers, Pipefitters and Service Technicians and is thoroughly enjoying her work. Her most recent jobs include the new convention center on the famed Las Vegas strip, the domed stadium for the Las Vegas Raiders and Resorts World, the first hotel built on the strip from the ground up in more than a decade. She is currently working on the MSG Sphere.

Guzman’s advice to other students is to just go for it, even if they are unsure of their degree.

“You’re not alone! If you have no clue what to pick, do your basics and pick something that sounds interesting. Try out the introductory course and if you like it, see what else you can do. If not, at least you tried it out and didn’t completely stress out,” she said.

“For students who have already decided they want to weld, the program is evolving and growing. Future students will have way more opportunities and classes with fun stuff to play with. New things are working their way into the program, including robotic welding, which will get you way farther into your career in the future.

“Ask for help! There is always a way to help you out of any situation you are in. And never settle, because life is too fleeting to settle. Stop making excuses, stop denying yourself, and stop contradicting yourself and just breathe. Get mad, get angry, go cry, get over it and just go out there and do whatever it takes to do whatever it is you want to do. No matter how hard life may seem, no matter how deep you are, just remember rock bottom is the foundation that everything is built on.”

Learn more about the Welding program at College of DuPage