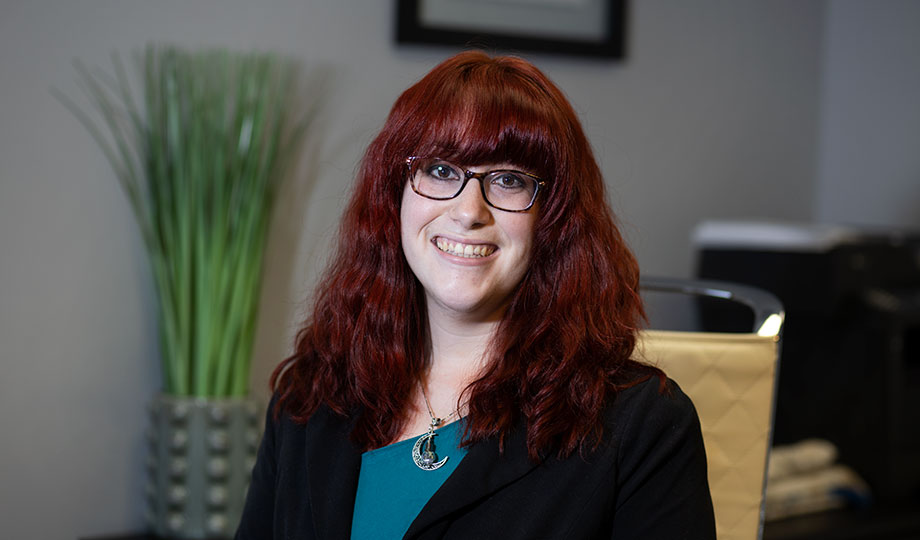 NOTE: This story is about the survivor of domestic violence and sexual assault who discusses her experiences as it relates to her educational and career journey.

Meggie Hernandez-Zayas wants to turn her advocacy for survivors into a profession.

While a junior at North Central College, where she was earning a bachelor’s degree in Entrepreneurial and Small Business Management with a minor in Spanish, Hernandez-Zayas found herself in an abusive relationship. For more than three years, she endured domestic violence and sexual assault from this and a second destructive relationship.

“My abuse culminated in my second ex-partner attempting to kill me by strangling me in his apartment,” she said. “I never went to court. I never filed a police report. I was one of the 60 percent of survivors who never would report the crime that was committed against them. I was left with an injury to my hand, which, as a classically trained pianist, was devastating to me. I struggled with severe anxiety, night terrors, flashbacks and panic attacks.

“I had to start figuring out how to begin my transition from victim to survivor and learn to navigate the lasting impacts of the trauma I experienced. I became a member of the Family Shelter Service Speaker’s Bureau and a member of the Smack’d program at Pillars Community Services. I even started my own photo series called Reclaiming Me, which aimed to shed light on the after-effects of trauma and to capture the experiences of survivors while showcasing their strength, power and beauty.”

As she became an advocate and educator, Hernandez-Zayas began fighting for survivor-focused legislation in Illinois. She met, interviewed and supported many survivors who never received the help they needed. This forced her to look back on her experience when she tried to tell the police.

“I went with my parents, and the police officer started the meeting by referring to my father as ‘Mr.’ and ‘Sir,’ but called my mother ‘Mom’ and treated her as if she was an idiot,” she said. “Even though he told me I was overreacting, he continued to ask me some questions and as I looked at my parents, I remember the officer saying, ‘Don’t look at them, you’re over 18, they can’t help you. Pretend you’re signing a car loan.’ That moment just punctuated my experience so clearly. My abuse, my pain, both physical and mental, that I had been experiencing for years—and that would nearly take my life later—was reduced to a car loan by the person who was supposed to be able to save me.”

Hernandez-Zayas eventually found a positive relationship and married. Observing the work that she was doing on behalf of survivors, her husband suggested that she become a paralegal.

“It fulfilled what I was looking for,” she said. “I wanted to be a part of the system that failed me—and so many survivors—so effortlessly. That is my driving force behind everything I do. We see a criminal justice system, both enforcement and judicial, that fails victims of crimes and discriminates against people of color, the LGBTQ+ community and so many other communities that have been historically marginalized. I was viciously and violently silenced for four years of my life and now, I want to devote my life to others who were and are silenced as I was.”

While researching programs, Hernandez-Zayas liked the fact that College of DuPage’s Paralegal Studies program was approved by the American Bar Association. She found her professors passionate and encouraging as they fostered an open environment for all students.

“Any questions I had were answered. Whenever I had an idea or goal, the answer I received was never that my idea or goal wasn’t going to happen, but instead how can it happen,” she said. “Even after graduation, I asked professors to be references for jobs and they were happy to provide whatever I needed. I absolutely want to continue supporting the program and even come back to take some classes I wasn’t able to before!”

Any questions I had were answered. Whenever I had an idea or goal, the answer I received was never that my idea or goal wasn’t going to happen, but instead how can it happen.

This includes spearheading a fundraiser for the Paralegal Studies Emergency Fund, which helps students with everything from affording school supplies to transportation to and from class. Hernandez-Zayas decided to encourage family, friends and fellow students to donate during the month leading up to her birthday.

“I thought it was absolutely incredible that our program wanted to make sure that students who lack financial stability continue to access higher education,” she said. “Due to the fact that COD is one of the few ABA-approved programs in Northern Illinois, we had some students who would commute over an hour one way just to attend their classes. We had many students who were single moms and recent divorcees who needed to re-enter the workplace. During my first term, I took three classes and met four survivors of domestic violence and sexual assault, and I provided resources to one student in crisis. We had a diverse program, full of students who had a variety of needs, including financial.

“Educational access and equity is imperative. Marginalized communities disproportionately lack the resources necessary to attend institutes of higher education and so many professions, including legal professions, are severely devoid of diversity.”

Hernandez-Zayas is currently a paralegal at Farooqi & Husain Law Office and continues her advocacy work. She ultimately would like to be employed by a survivor-focused nonprofit.

In 2022, she was the recipient of the Illinois Community College Trustees Association’s 2022 Pacesetter Award. The annual honor recognizes the accomplishments of a recent community college graduate who has overcome life’s obstacles, focused on humanitarian service, and continued supporting education and community colleges.

Hernandez-Zayas, was honored to be nominated for the Pacesetter Award and thrilled to receive it.

“The Pacesetter Award will be a constant reminder of the positive experience I had at College of DuPage and the new path I was able to take because of the amazing professors, leaders and fellow students in the COD Paralegal Studies program,” she said.

As for any student considering the Paralegal Studies program, she advises them to ask for help from both faculty and peers.

“Faculty can help point you to scholarships, emergency funds and other resources. We had students sharing textbooks, and I regularly attended weekend study sessions filled with books, highlighters and donuts to work on difficult classwork,” she said. “I was in so many group chats and text chains with students, which was incredibly helpful in learning difficult topics or if we had to miss class. For the practicum, we found affordable supplies and shared them to help keep costs down.

“Honestly, the Paralegal Studies program is a community, and I am not just saying that to adhere to the standard language most colleges use. I genuinely mean it. This was, by far, one of the best educational experiences I have ever had.”

Learn more about the Paralegal Studies program at College of DuPage.