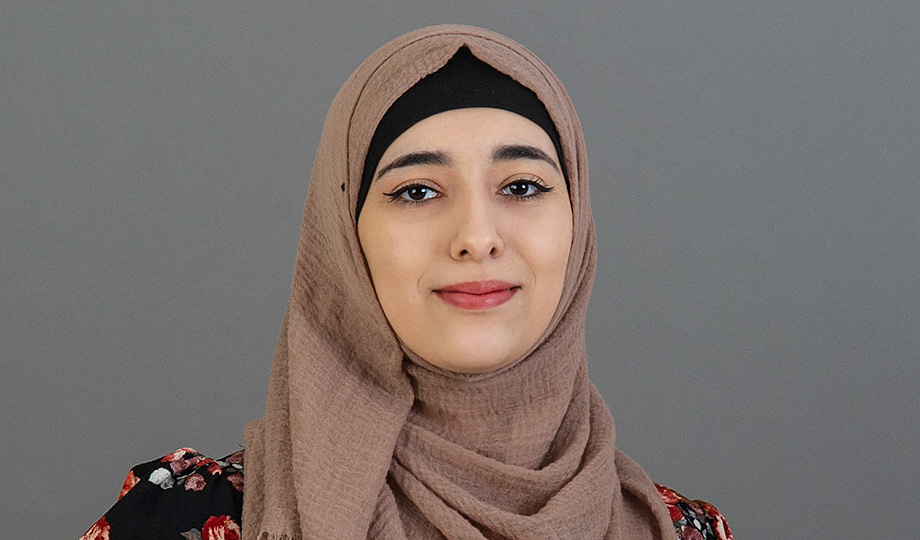 It’s a love that she developed at a young age, whether it was through words or visuals.

“My journey with poetry began when I was in elementary school,” she said. “The first memory of it I have is a notebook I wrote poetry in occasionally. Though I don’t remember much of what I wrote about, I do remember one poem word for word to this day. It was about my younger sister and how annoying she was. When I read it in front of my class, they erupted with laughter – good laughter.

“In my fifth-grade English class, one of the assignments I was most excited about was creating my own storybook. I had the best time bringing my story to life through my drawings.”

Bayan also grew up watching animation, which influenced her decision on how to tell stories.

“Because my mom never let my siblings and I watch live-action shows because she didn’t think they were appropriate, we’d always watch animated shows,” she said. “Whether it was Nickelodeon, Cartoon Network, PBS Kids, Boomerang or Discovery Kids, there was never a lack of great shows to watch, and that became a big part of my childhood. At almost 16 years old, I was amazed to find that I could learn to create animated stories like the ones I loved so much, and that’s when I decided I wanted to pursue animation.

“Poetry, storytelling and animation go hand in hand. Most animation is only as good as the story being told through it, and that’s part of its beauty. Without a story or a sentiment, or a lesson to learn, what’s the point of it?”

Jarad, who was born in Chicago, moved to Palestine with her family a week after turning 11. It was a struggle at first, but after time she settled in and by the time she was in ninth grade, she was one of the top-ranked students in her class.

When her family moved back to the Chicago area before her senior year, Jarad found that her preparation for college lagged behind her classmates. Her aunt, who works at College of DuPage, and cousins spoke highly of COD and helped her register.

“I wasn’t sure I wanted to go to COD, but they were right and I’m so happy I didn’t choose to go anywhere else,” she said. “I was able to finish my general education requirements while also exploring my interests in art, creative writing and animation. The electives that I took played a vital role in steering me in the right direction, and I’m very thankful for that.”

Jarad earned her Associate in Arts with high honors and was named one the College’s Outstanding Graduate finalists. She is transferring to Columbia College to major in Animation and knows exactly what direction she wants to take.

“Although I loved watching animation growing up, I don’t remember once seeing a Muslim character. I remember black characters, Jewish characters, even a special needs character, but not a single Muslim character. No one ever talked about Arabs and the Middle East, no one ever mentioned Islam when religion was involved. And although I loved these shows, my siblings and I felt left out. We felt like we didn’t belong in those beautiful worlds supposedly created for us as children. We felt like ‘the other.’

“I intend to change that. I want to represent not just Muslims or Arabs but all underrepresented people around the world. I want each and every child to see themselves on the screen and feel included. I want to openly and publicly acknowledge the barrier that sets us aside from everyone else, and I want to help destroy it. I want to be the Muslim woman role model that I never had to all the little Muslim girls out there, and I want to tell them that they can achieve their dreams no matter what people say.”

While working in a big studio like Disney or Pixar is an animator’s dream, Jarad just wants her work to be seen. As for COD, she advises students to enroll because they have a better chance of succeeding than at a large university.

“The COD community is incredibly inclusive, and many professors care a lot about their students,” she said. “COD creates an environment that sets its students up for success, and it’s the best option financially. There’s no pressure to always know exactly what you want. At COD, people get a chance to explore and get to know themselves, what they want and what they’re good at.

“I’d just like to thank COD for giving me the experience of a lifetime, one I will never forget. My two years there were the best of my life, and thanks to the incredible people who have accompanied and supported me through this journey, I’m proud of who I’ve become, and I know I’ll be proud of what I achieve in the future.”