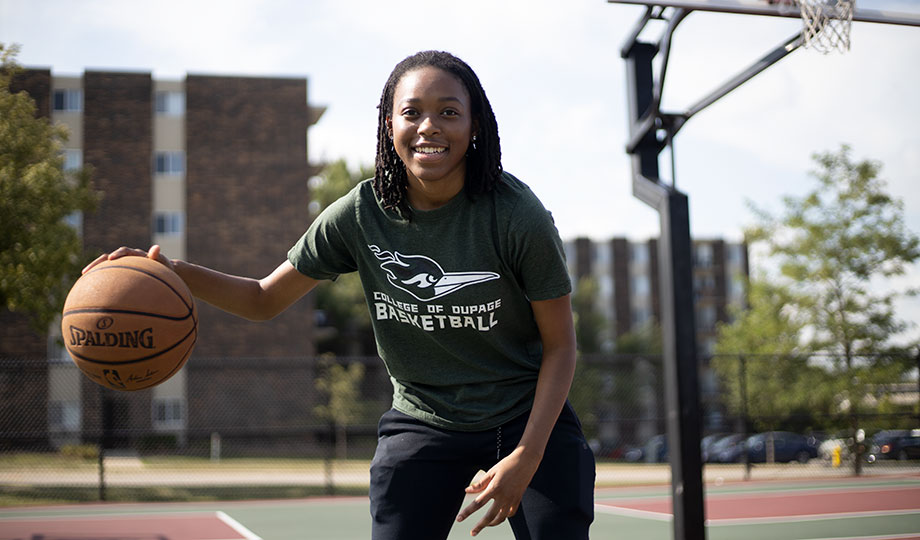 Jaylyn Grant has been playing basketball since the fifth grade.

“Since I played all through high school, continuing to play at College of DuPage was an easy decision,” she said. “COD was also the most affordable option for me straight out of high school.”

As captain of the COD women’s basketball team her first year, Grant led the Chaps in scoring, averaging 17 points a game over 27 games. Unfortunately, due to the pandemic, she and her teammates were unable to finish the season and the following season was canceled.

While playing basketball was a key component to her time at COD, she also focused on her academics, balancing games and practice with a rigorous full load of classes.

“COD helped me because I was able to knock out all my general education courses—65 credits total—that allowed me to transfer with ease to any four-year institution after two years,” she said. “My professors, advisors and coaches all allowed for me to continue my education beyond COD.”

Grant graduated with her Associate in Science degree, earning high honors and being recognized during the annual Celebration of Academic Excellence for athletics. She then enjoyed a 10-week internship at the University of Colorado Anschutz Medical Campus in Denver, where, as part of the Graduate Experience for Multicultural Students, enjoyed research opportunities in the areas of heart, lung and blood diseases.

Grant is now studying biology on a pre-med track at Eastern Illinois University.

“Some of my goals when I become a doctor include serving underrepresented communities, doing humanitarian work overseas and mentoring pre-med students of color,” she said. “I also plan to continue doing undergraduate research at Eastern Illinois.”

Although Grant initially hoped to attend a four-year university after graduating from high school, she is happy that she came to COD.

“A community college can be difficult given you do not get that same four-year social experience of meeting new people through shared dorm living,” she said. “But playing sports at COD allowed me to establish lasting relationships with advisors, coaches and other athletes. It also allowed me to have a support group that held me accountable for maintaining good grades.

“Once I immersed myself, it became very clear to me that I made a great choice in attending COD.”

Learn more about the Biology program at College of DuPage