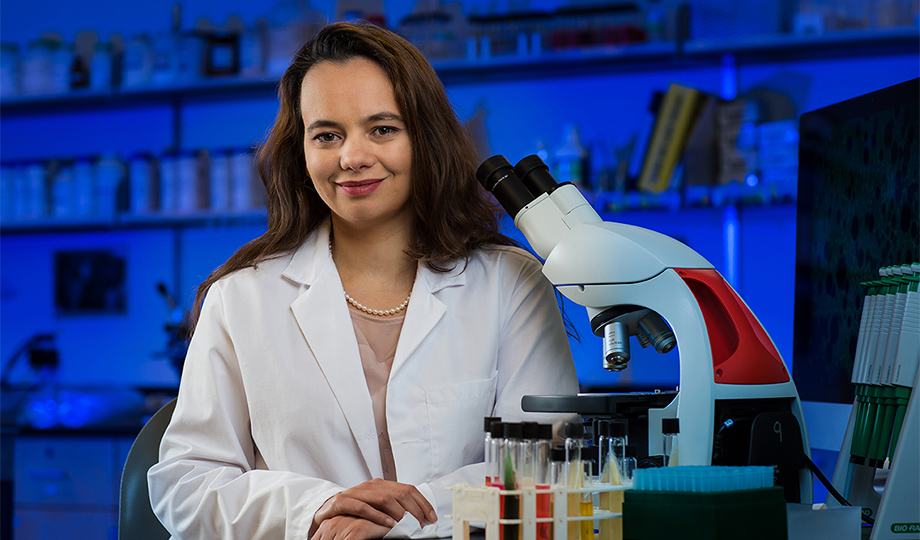 Marsela Jorgolli’s passion for physics led to a decade of academics and research at Harvard University.

Having successfully defended her Ph.D. in Physics at Harvard in 2015, she then began working as a member of the university’s Park Research Group, led by renowned Professor Hongkun Park. The team focused on researching nanometer-sized materials – such as nano-diamonds, which are not visible to the naked eye – in hopes of developing and building devices that work with cell networks. These devices eventually could be implemented in multiple ways, such as multiplexed brain functional sensing and high-throughput pharmaceutical screening.

“Being at the forefront of this research is very exciting,” Jorgolli said. “I love contributing to the development of new tools that will better our society, tools that were once thought of as impossible.”

Jorgolli’s team’s accomplishments are many, including their first measurement of cellular membrane potential changes using nano-diamonds and the submission of several patents based upon their development of new technologies.

In 2014, Jorgolli was selected to attend the GapSummit at the University of Cambridge in the United Kingdom. It was the first international and inter-generational gathering that focused on inspiring and engaging the next generation of biotechnology leaders, and she was one of only 100 people worldwide invited to participate. Watch a video of Jorgolli being interviewed during the summit.

Her success is a reflection of the difficult decision her parents made to move their family from Albania to Villa Park in order for Jorgolli – valedictorian of her high school class – to pursue a career in physics and chemistry.

“We moved to the U.S. in late July, and I was thinking about applying to Northwestern,” she said. “But because it was so late, their admissions period had already closed.”

Jorgolli enrolled at College of DuPage and embarked on what would become a stellar academic career that resulted in numerous honors, including being named to the All USA Community College Academic First Team and receiving the prestigious Barry M. Goldwater Scholarship. She was the first COD student to receive the latter, a premier national honor for students pursuing careers in mathematics, science and engineering. Jorgolli also was selected for the inaugural meeting of the Center for Gravitational Wave Astronomy (CWGA) at the University of Texas at Brownsville and was the only community college representative, as well as the only freshman, selected to attend opening celebrations for the NASA University Research Center at UT.

Her mentor, College of DuPage Physics Professor Tom Carter, was immediately impressed by her abilities.

“Marsela was probably the most motivated and talented student I’ve ever had,” he said. “From the moment she joined my class, she was eager to learn and was always asking questions. It was clear that she would go far with her career.”

After College of DuPage, Jorgolli transferred to the University of Chicago and found the transition challenging.

“I had taken all of the science courses I could at College of DuPage so I could start taking classes at the junior level. It was not easy, but I learned so much,” she said. “During my first week in Biophysics, I was attracted to the quantitative tools of studying nature and physics as well as how physics principles are used in biology.”

She earned her bachelor’s degree in Physics and immediately applied to doctoral programs, deciding that Harvard was the best fit and an excellent place to spend the next phase of her academic life. After initially taking classes, she became a member of Park’s research group.

“We developed nanotechnology tools to study complex biological systems,” she said. “Our focus was to develop large-scale, solid-state devices that would be used to interface with neurological networks that stimulate activity.”

After spending nearly a decade at Harvard, including work as a postdoctoral fellow, Jorgolli currently works at Amgen as a scientist in the department of Hybrid Modality Engineering. Her long-term goal is to help with the development of complex, integrated, nano- and micro-scale platforms.

“It’s important to determine a better way to see how the brain works, and our work can lead to the development of new drugs to fight brain disease,” she said. “The work is very satisfying, and we’ve already developed the first generation of devices of single cells in networks.”

In 2017, Jorgolli was named one of College of DuPage’s Distinguished Alumni, and in 2019, she was the leading and corresponding author for a review paper that was the cover story in the September edition of the Biotechnology and Bioengineering Journal. It’s all a testament to her success.

“When I came to the U.S., I wanted to attend a great university. I didn’t come here for a two-year community college, but College of DuPage ended up as the best route for me. COD gave me the resources and opportunities to excel in my academics and my career.”