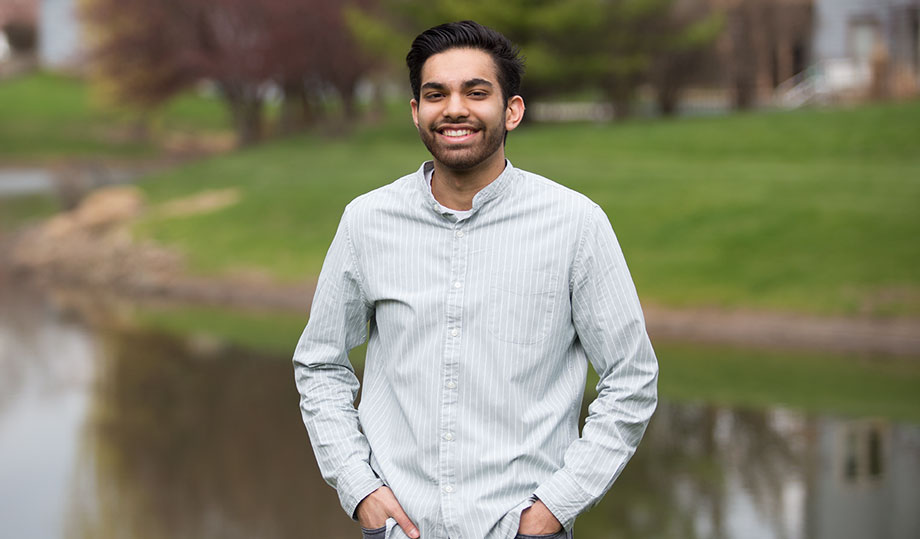 When Areeb Kidwai offers advice to other students, it comes from the lessons he learned from his own personal challenges.

“It doesn’t matter what you have or haven’t done, what matters is this moment,” he tells them. “Don’t seek acceptance from other people. The only acceptance you need is your own.”

The top grades Kidwai earned at College of DuPage are continuing at the University of Minnesota, where he is majoring in psychology. This success was the opposite of his experience in high school, where his GPA was 2.11 after his sophomore year and his behavior was anything but ideal.

“After being cut from the basketball team, I started to let other people determine my worth and my life,” he said. “I began to lower my standards and became a person I didn’t want to be, just for the approval of others. I was running with the wrong crowd, struggled with addiction and was extremely depressed. I was feeling sorry for myself and wasn’t emotionally strong, so I began to lose hope.”

The idea of being sent to a boarding school had been growing in Kidwai’s mind as a way to escape his life.

“My parents didn’t recognize the son they had, and I began to isolate myself from my family and even my friends. Eventually, I told my parents that boarding school would be better than living at home with them.”

“I just thought, ‘Sure.’ Then I got into my uniform, said goodbye and at that point thought I was done with my parents,” he said. “I was 16 and figured I would stay there until I was 18, and then I would be on my own.”

After two days, Kidwai learned that boarding school was far from what he had imagined.

“I would wake up to a man screaming ‘head count’ at 6 a.m. during the weekdays and spend my weekends cleaning the facility and studying. The first month was the worst month of my entire life. I felt alone.”

Phone calls were not allowed during the initial months and would become a privilege that needed to be earned. Kidwai instead wrote to his parents, apologizing for his behavior and asking to be picked up. When they didn’t come, he wrote to them again. It was an agonizing wait but when they finally replied, he was relieved to hear that they still loved and supported him.

That was enough to motivate him. When he graduated, Kidwai returned home and enrolled at College of DuPage.

“COD was my only option, but it gave me a fresh start,” he said.

During his first semester, he took Introduction to Human Services, a course that included site visits and service learning hours completed at NAMI DuPage. NAMI (National Alliance on Mental Illness) provided Kidwai the opportunity to work with people facing mental illness, and he realized that he wanted to help others.

“I had a feeling before about what my career should be, but when coming to COD, I didn’t want to commit just yet,” he said. “After working at NAMI, I thought, ‘This is what I want to do.’”

Kidwai earned straight “A’s” for his first semester. But he faced another challenge in his second semester when, during his statistics course, he failed his first exam and earned a “C” on his second.

“I realized I could either feel sorry for myself and just earn a ‘C’ or I could hold myself to a higher standard and make adjustments,” he said. “I joined a study group, went to the Learning Commons and took a leave of absence from my job because education came first. I then began earning ‘A’s’ and my entire confidence was boosted. I thought that if I can turn this around, what else can I do?”

Kidwai also became involved on campus, first with the Muslim Students Association, for which he served as secretary, and then with New Student Orientation.

“When I was in NSO, I got to see the type of leader I wanted to be, so the next year I became an NSO leader and learned about situational leadership,” he said.

Kidwai’s hard work paid off when he was named one of COD’s two outstanding graduates in 2020 and was accepted into eight universities. While at the University of Minnesota, he participated in an internship at a mental health organization targeted toward Muslims to enhance spiritual and mental wellness. He worked on a crisis line, where he heard from people around the world seeking help.

“I heard family dynamics much different than my own through the voices of these callers as well as the struggles that come with being in a certain culture or the practices of one,” he said. “I was able to not only learn academically about the counseling process but also broaden my horizons of the different perspectives that people view the world in.”

His goal is to become a psychologist, specifically conducting research on treatment outcomes and pathologic disorders. Kidwai then would like to practice the applications of his research in a clinical environment.

He also would like to open a residential school to provide therapy and help young men and women develop healthy habits.

As for COD, Kidwai made the most of his second chance. Applying to become outstanding graduate was an opportunity to share his story.

“I wanted to motivate other students,” he said. “It’s good to put myself in an uncomfortable situation and build confidence from it.

“College of DuPage leveled the playing field for me. I came alone to an uncertain environment, but I was only judged by my hard work. COD is a place where students can become their best selves.”