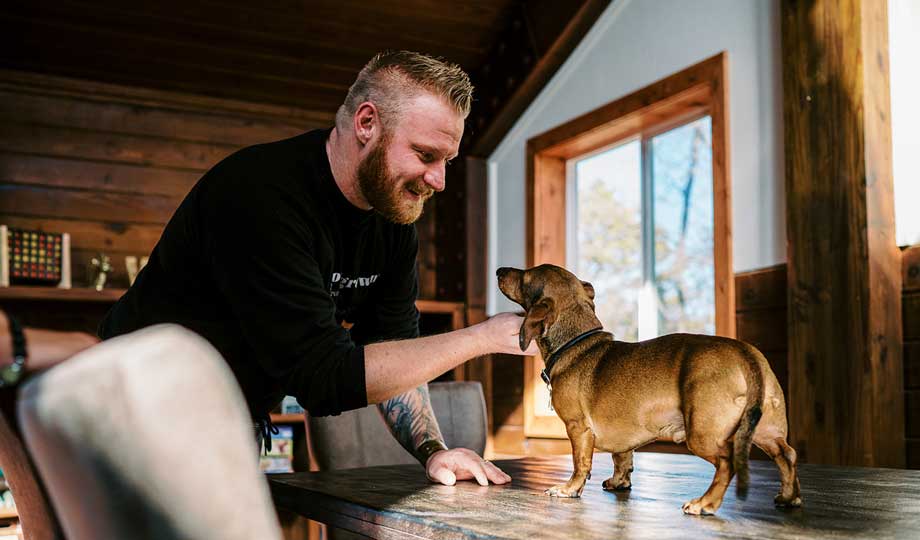 When Bradley Kirouac (above left) got out of the Marine Corps, he moved to Arizona for a year and started a degree in mechanics. However, he realized that wasn’t the career for him.

“I didn't know where I wanted to move to but I knew I wanted to be closer to Michigan,” he said. “My cousin told me there was a great community college with amazing opportunities near where he lived, and I decided that's where I wanted to start my career path.”

Kirouac started to envision his path at College of DuPage when he took Intro to Sociology with Norene Herrington.

“She opened my eyes to the world and helped me expand my passion for the people around me,” he said.

Of all of Bradley’s experiences at COD, his greatest was joining Pride Alliance, COD’s gay-straight alliance.

“When I first walked in, I didn’t know what to expect. I was nervous, happy and also felt alone,” he said. “But within the first five minutes, I was a changed person. And, for the first time in my life, I felt accepted for who I was. My objective was to expand Pride to help more students than it had in the past, so I applied for the president position and, with a great team of officers, we did just that.”

Because of his efforts, the Office of Student Life named Pride Alliance its Club of the Year and Bradley received the Benjamin P. Hyink Student Leader of the Year Award.

Kirouac earned his Associate in Arts degree from COD and then transferred to Robert Morris University to pursue a bachelor’s degree in business administration with a concentration in management.

In 2019, he and his husband, Matt, signed a contract with iHeart Radio and launched Parklandia, a podcast that documents the couple’s experiences traveling the country with the goal of visiting as many national parks as possible. Having spent extended periods of time away from each other while on the road for work, they decided to begin traveling full-time in their RV as a way to spend more time together. The podcast shares discoveries about what makes the parks unique, including the Everglades, Redwood and Congaree.

“It was one of those decisions that we both jumped into,” Kirouac said. “We did some research, but neither of us grew up going camping or traveling in RVs and motor homes or anything like that.”

When the couple initially discussed the idea of starting a podcast, both were hesitant as they were not familiar enough with the process in order to move forward on their own. Coincidentally, Christopher Hassiotis, a former colleague of Matt’s who is now an executive producer at iHeart Radio, reached out shortly after that he was looking for new travel-related podcast ideas.

“Listeners heard the American dream. To be able to work anywhere you want across the entire country was fun. Our office could one day be a beach. The next day it could be a coffee shop and, the day after that, a rodeo.”

After getting off the road, the couple found a home in an unlikely place—Oklahoma City, where Kirouac secured a role as Area Director of Big Brothers Big Sisters, the nation’s largest donor and volunteer-supported mentoring network. BBBS makes meaningful, monitored matches between adult volunteers and children ages 6 to 18 in communities across the state of Oklahoma.

Kirouac said his new role is similar to being president of Pride Alliance at COD.

“Without the experiences at College of DuPage, I wouldn’t have so easily found this dream job serving the next generation of amazing children who need mentors in their lives, which will help break generational cycles like I was able to.”

Kirouac is grateful to College of DuPage for the many opportunities offered to him, and he advises other students to get involved.

“You will find a great support system that will expand your education farther beyond the classrooms,” he said.

(Photo by AJ Stegall at AJStegall.com)

More about the Associate in Arts degree

Listen to Parklandia on iHeart Radio and Apple Podcasts.