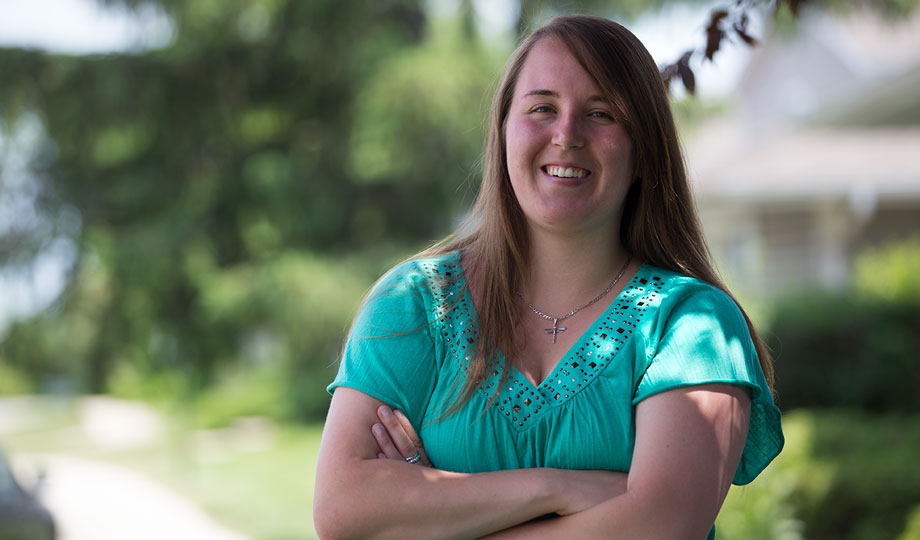 “I have a passion for animals, and I discovered that I liked to heal them when one of my betta fish fell ill,” she said. “I doctored him myself with aquarium salt, allowing him to live for over a year after that. I healed several fish the same way in the following years, and I imagined how cool it would be to save an even bigger animal one day.”

Kueking chose College of DuPage because it allowed her to stay at home without spending a lot of money to live in a dorm. Plus she could fulfill most of her general education requirements before transferring.

“Also, the difficulty of the classes has really helped me excel. I have earned straight As so far at COD,” she said. “The classes are definitely more work than high school classes, but they’re not so difficult as to overwhelm a student new to college.”

In 2020, Kueking was recognized by Mathematics faculty for excellence during the annual Celebration of Academic Excellence. It’s a subject in which she actually fell behind during elementary school because her family moved often.

“I missed the multiplication unit near the end of elementary school, so I started studying times tables every day trying to pass the test to take Pre-Algebra in sixth grade. I mastered multiplication but did not pass the test to make it into an accelerated math program,” she said. “However, my sixth grade teacher noticed how few mistakes I made in his math class and how much I liked it, so he nominated me to take Pre-Algebra in seventh grade instead of eighth.”

She continued to excel in math through high school. However, after taking a semester off after graduation, Kueking tested into the second semester of pre-calculus instead of calculus at COD.

“Although I had already taken pre-calculus, I decided to take it again to refresh my memory. That’s when I met one of the best teachers I have ever had, Professor Abbas Jaffary. Taking his Pre-Calculus 2 and Calculus 1 classes reminded me how much I loved math, and I would work my hardest to get to the right answer. He nominated me for the award for math, but I would love to nominate him for an award in teaching.”

COD also helped Kueking make new friends and have fun with them through the activities offered in the Student Life Lounge. Outside of school, she loves writing fiction and poetry. During her first semester, she won $500 for placing in the top three during the Black History Month Expressions Contest. She also is participating in the Camp Nanowrimo contest by attempting to write 25,000 words in a single month.

After earning her Associate in Science degree, Kueking will transfer to pursue a pre-veterinary degree and then her veterinary science degree. She also wants to become a published writer as a side job.

As for COD, Kueking said that everyone working at COD loves their students.

“The faculty provide everything for their students, from fun activities to meeting new people, proper recognition of a job well done and educational help when students need it,” she said. “COD has something for everyone, whether it be a class, a club or an event.”

More about the Associate in Science program