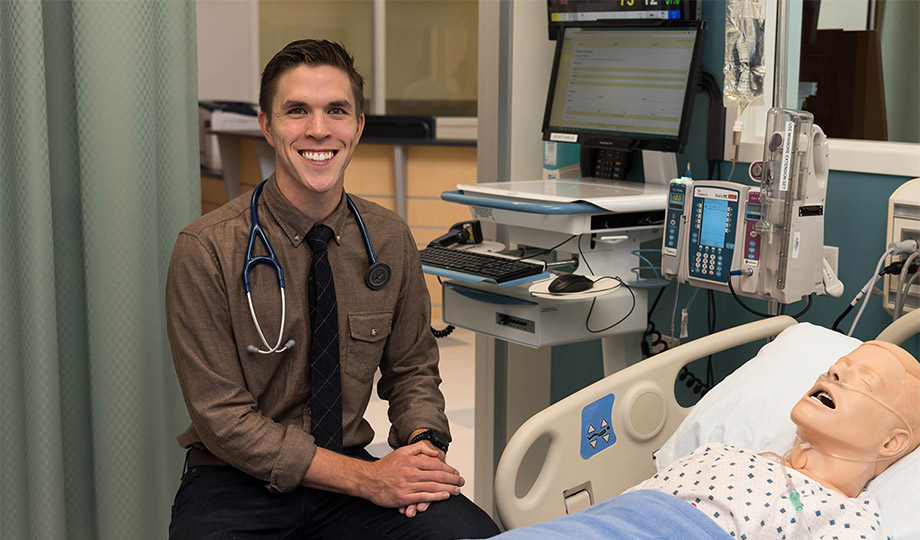 Mark Tom majored in biology. Watch the above video as Mark talks about his career and the positive impact of College of DuPage.

Mark Tom knew he wanted to study medicine before attending college. And he knew College of DuPage was the right place to start.

“I wanted to develop the skills needed to succeed at a four-year university. These skills included balancing my schedule, managing stress and growing study habits,” Tom said. “I also learned I could attend COD with tuition breaks through the Honors program, assuming I maintained a 3.5 GPA.”

But Tom got more from COD than he ever imagined.

“COD has gone far beyond in assisting me to achieve my goal of becoming a doctor,” he said. “Where I lacked in motivation, professors inspired. When I had no money, scholarships and financial aid provided. Hands down, however, the best gift I received from the College is the confidence to transform my dreams into a reality.”

While applying to medical school, Tom worked as a research technician at the Fred Hutchinson Cancer Research Center in its Immunology Program. In 2015, he worked at a rural family practice, the Orcas Medical Center, on Orcas Island in the San Juan Islands and completed an independent investigative inquiry and public health project. His project involved developing and implementing an evidence-based training program for volunteers in health promotion for community seniors at the Orcas Island Senior Center.

Tom realized his dream of completing medical school when he graduated from the University of Washington School of Medicine in Seattle. He had the honor of speaking in front of hundreds of UWSOM students, teachers, scholarship donors and families about his own story during the annual Scholarship Ceremony.

He currently is working a three-year residency at Kootenai Health Hospital and Kootenai Family Medicine Clinic, where he is further developing his medical knowledge base, clinical acumen, and technical and procedural skills in order to work as a doctor anywhere in the world.

“It’s a really exciting time in life as one of my childhood aspirations – to become a physician – has been officially achieved,” he said. “However, I realize now that my original goal of becoming a physician will, in fact, be a lifelong journey as I’ll continually grow, learn and evolve as a physician, never fully arriving but continually striving in serving my patients, my community and humanity.”

One of Tom’s latest interests is exercise and nutrition as medicine. He is currently part of a quality improvement project in conjunction with clinic’s pharmacist to improve the clinic’s standard of practice in the diagnosis and treatment of patients with obesity.

“The preponderance of studies underscoring racial disparities in health care is unacceptable, and the grim realities of police brutality against blacks highlighted in the news was a call to action,” he said. “In preparation for this presentation, I’ve attended several anti-racism workshops, lectures and read anti-racism literature, and I find the work to be deeply personal, challenging and rewarding. I’ve also taken on a larger role in mentoring other undergraduates from disadvantaged backgrounds through the Washington State Skills that Shine Mentorship Program.”

Looking ahead, Tom has signed with Kaiser Permanente as a full-time family physician for the upcoming year, which means staying in the inland Northwest, an area he enjoys exploring with his spouse, Sara.

Tom is grateful to College of DuPage for providing a springboard to his personal development as a student. He would like to create a scholarship fund similar to the ones he received.

“Many thanks to the College and its faculty for their continued support and encouragement, which has led me to where I am today,” he said. “I still remember my early college days at COD – especially the relationships with my then mentor Chris Petersen and many other professors in the Honors Program – and how it really laid a strong foundation for the work I do today. I am and will continue to be incredibly grateful.