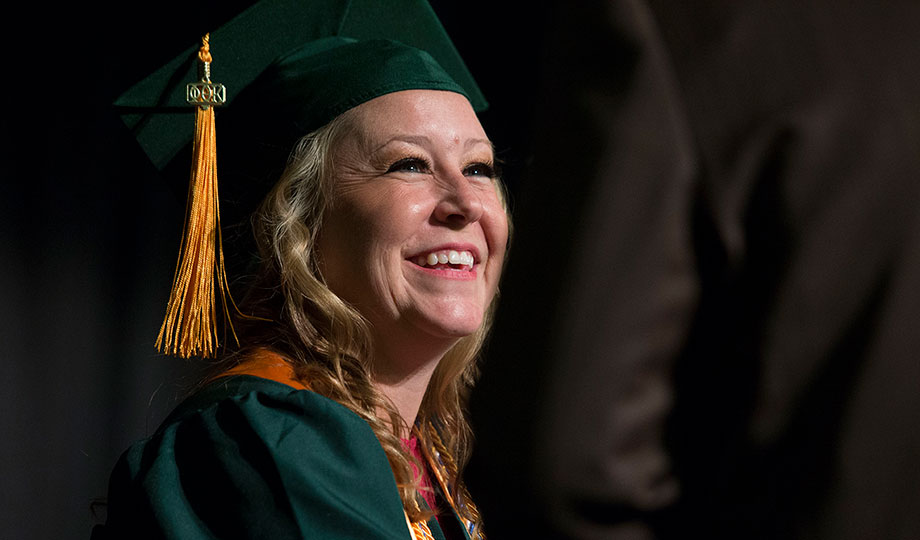 Although Renee Mecklenburg was always drawn to the medial field, she initially earned a bachelor’s degree in International Business with a minor in Spanish.

“I was motivated by the monetary rewards of the field,” she said. “But I never truly felt fulfilled. The jobs I had were very impersonal and about data, when I really wanted to work with people.”

Mecklenburg accepted a part-time position at an OB/GYN office and discovered that she enjoyed it more than her previous experiences.

“Everything changed,” she said. “I was working with patients who were not just a voice over the phone,” she said. “In an OB/GYN office, patients are either enjoying the best moments of their lives or having some of the most gut-wrenching experiences. I learned how to approach each situation and provide the right kind of care.”

When Mecklenburg had her second son, he initially went to the neonatal intensive care unit (NICU). One nurse spent hours helping Mecklenburg breast-feed her son even though he was hooked up to monitors and tubes.

“If it wasn’t for that woman taking the time to truly help me, I wouldn’t have connected with my child the way I did while he was in NICU,” she said. “I decided I wanted to be that person to have an impact on someone when their life is in chaos.”

Mecklenburg spoke with her husband, who fully supported her decision to return to school. They sold their house and moved in with family so she could focus on her studies without needing to work full-time.

She selected College of DuPage because of the Nursing program’s strong reputation.

“I heard it was difficult but in a good way, because you want training that truly prepares you,” she said. “The program helps you explore the many avenues of nursing, and I’m now drawn toward becoming an ER nurse because my ER clinical was amazing. I also like the idea of being that first person who provides comfort and guidance when someone comes into the hospital.”

It was Mecklenburg’s nurturing ability that led her fellow students to give her the nickname of “Mama Meck.”

“I don’t want to see anyone fail,” she said. “We all got to this point, we are all strong and we are all intelligent. I was a cheerleader for all of us.”

On campus, Mecklenburg was co-president of the Student Nurses Association and was a member of both Alpha Delta Nu and Phi Theta Kappa honors societies. In 2017, she was named one of the College’s two Outstanding Graduates.

After commencement, Mecklenburg and her family moved to Florida, where she is at Health Park Hospital working in the ER. She also was accepted into the hospital’s leadership development program.

Mecklenburg would advise any prospective student to follow their dreams.

“The professors in the Nursing program are there for you with anything you need, and the facilities are top-notch,” she said. “The sim labs and mannequins provided us with real-life experiences so we could anticipate what we would see in the field.

“I was 40, a returning student and this is my second career. I have a sense of pride that I did this, and if I can do this, then anybody can.”