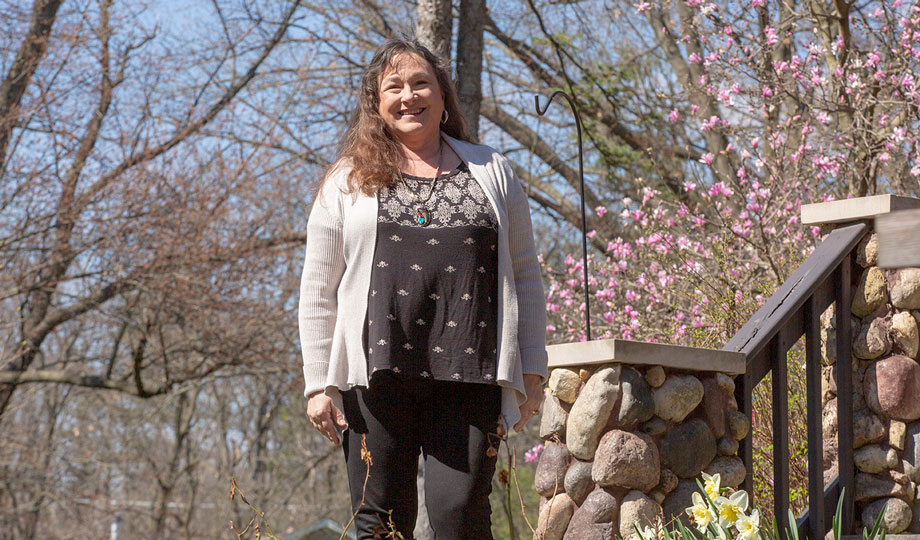 In 2011, Heidi Monteith found herself in a challenging position.

After spending 20 years as a stay-at-home mom to raise her children, she was going through a divorce and could not find a job that would pay a livable wage. She spent the next five years juggling part-time jobs and struggling to make enough money to support herself and her children.

After learning about the American Opportunity Tax Credit for education expenses for eligible students offered by the IRS, as well as the availability of student loans, Monteith began to envision possibilities for her future. Discovering opportunities for Computer Automated Design drafters and kitchen designers at a job fair, she made the decision to enroll in the Interior Design program at College of DuPage.

“The clouds parted, and I knew what I wanted to do,” she said. “I had been designing dream homes in my head all my life but had never thought of getting paid for it. I immediately signed up for the 2017 summer session at COD.”

As it turned out, the timing was perfect. While her daughter Roxane Johnson had been taking general education classes at COD, she was looking for a career path and enrolled in the Dental Hygiene program. Another daughter and one of her sons also were enrolled.

Monteith said that while there was little overlap between the programs in which the family members were enrolled, there was still plenty of opportunity for them to offer each other support.

“While I was in Interior Design, Roxane was in Dental Hygiene, my other daughter was taking general education classes toward being a physician’s assistant and my son was taking welding classes,” she said. “Nonetheless, we all managed to support each other. I supported my daughter by being one of her patients for her lab classes. My son supported me by pitching in and helping with the welding when my partner in Furniture Design stopped showing up. We traded experiences about favorite teachers and passed textbooks along for some of the general education classes.”

No stranger to COD, she has taken a broad range of classes at the College over the last 30 years, including courses in dance, Japanese, massage, music, sewing and theater. Like Johnson, Monteith also gained critical benefits by attending COD.

“Classes offered day and night allowed me to work while attending school,” she said. “Financial aid allowed me to finish in three years; it would otherwise have taken several more years, and once you know what you want to do, who wants to wait around for years to start doing it? Also, becoming a design student enabled me to find paid internships and part-time jobs in the industry that paid 50 to 100 percent more than what I had been earning before becoming a student.”

Monteith also took advantage of many leadership opportunities at the College and served as vice president of the student chapter of the National Kitchen and Bath Association. She also advised students seeking LEED Green Associate certification and tutored students in CADD.

“The leadership opportunities I had at COD allowed me to reach back and lift up others who may be struggling,” she said. “They made it easier to see things from someone else’s perspective and instilled a sense of gratitude for the many blessings I have received. I am by nature kind of a loner, so it is hard for me to get involved in group activities. The industry organizations within the department gave me opportunities to meet and work with people, which is totally out of my comfort zone.”

Monteith would like to emphasize to new students the importance of choosing an educational path that will lead to a successful career.

“I have friends who took out student loans that will take their entire lives to pay off because they chose fields of study that offer personal fulfillment without consideration for employment opportunities or pay scale,” she said. “My entire student debt is about half of my first year's salary out of school, and I expect a significant increase when I complete my first year of full-time work.

“I love my job; I love feeling valued and appreciated for what I do. I am 60 years old and I'm finally doing what I was born to do.”

Monteith is returning to campus for a new class that will make her more valuable to her company and clients.She said that in addition to reaching her professional goals, COD enabled her to achieve her personal goals as well.

“I wanted to set an example for my kids and grandkids that, one, it is never too late to make a change. Two, they should never let themselves be stuck in a bad situation because of money. And three, if you want something, you need to be willing to work hard and make sacrifices to attain it,” she said. “I feel like there were times when I was not able to provide everything I wanted to for my kids and times when I didn’t set the example I wished to. I hope that this accomplishment will mitigate some of my shortcomings in their eyes. I know I am very proud of Roxane and how hard she has worked for this. All of my kids have had jobs since they were 13 or 14 years old and it shows now in their determination to succeed.

“Now that I have graduated, I’m confident that I will be earning significantly more than I have in the past. Because of my education at College of DuPage, I have marketable skills that I can bring to any company and that makes me a valuable asset.”

Learn more about the Interior Design program at College of DuPage