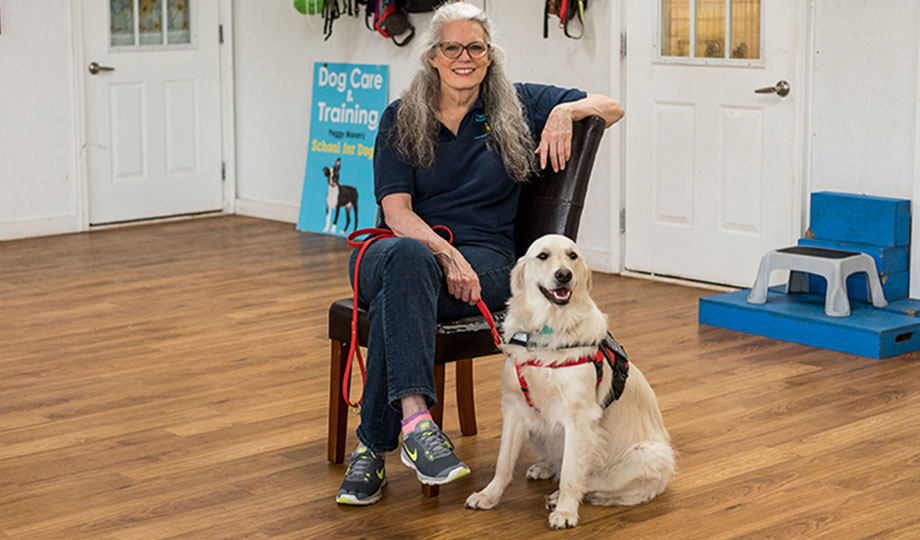 Peggy Moran dropped out of high school to start a successful dog training business.From there she became a writer and editor for Dog World magazine and a behavioral consultant for the American Dog Owners Association, in addition to self-educating herself on a variety of topics along the way.

But she always told her two daughters to take advantage of educational resources available to them, and she was motivated by their success in college.

“Seeing their horizontal and vertical growth at school, I always wondered what I had missed,” she said. “I am so proud of them, and I wanted them to feel that same pride about me.”

In 2008, her youngest daughter nearly died from a serious health condition. It changed Moran’s perspective, and on a whim she stopped by College of DuPage to find out about completing the GED.

"I looked upon my education as a lack of a personal best,” she said. “I had unfinished business to address.”

Moran completed her GED with high honors and immediately signed up classes at COD. For four straight semesters, she enrolled as a full-time student and earned straight A’s. She then received the Jack Kent Cooke Foundation Undergraduate Transfer Scholarship, the largest private scholarship for two-year and community college transfer students in the country. JKCF annually awards scholarships of up to $30,000 to deserving students to cover a significant share of their educational expenses, including tuition, room and board, books, and fees for the final two or three years necessary for them to obtain a bachelor’s degree.

I’m proof that at any age a person can redefine herself. With help from the community at College of DuPage, I’ve been able to express myself in ways I never felt possible.

However, she took a break from her studies to focus on several initiatives. She spent two years establishing a service dog training program for wounded Marines suffering from PTSD and TBI, with support through the Semper Fi Fund, and currently is the training director for AVSDA (American Veterans Service Dog Academy), a nonprofit organization that places and trains service dogs with veterans with PTSD. She is on the board of directors for Task Force 75 Inc., a primarily veteran-staffed disaster response team, and serves as the head of animal rescue operations.

Moran also returned to COD, taking a Crisis Intervention course online that added to her skill set when dealing with others in the context of her work with AVSDA and Task Force 75.

At Kankakee Community College (KCC), she works with a group of students, a community psychology professor and the Veterans Center. In addition, she and AVSDA are working to establish a prototype program.

“This program will allow students to enroll directly through KCC in an associate degree ‘human/animal studies’ program or in specific elective classes for non-degree-seeking students. In addition, by partnering AVSDA with KCC, we will offer our Veterans Service Dog training program through the community college. We will have undergrad students not just learn about applied animal behavior specific to training service dogs, but the students will also help veterans train their assistance animals.”

Moran also has presented to the American Psychological Association, the International Society for Anthrozoology and the Animal Behavior Society. Because of COVID-19, she developed an entirely online service dog training program.

Moran is grateful to College of DuPage for preparing her for her success.

“When I came to COD, I thought I would feel odd about returning to college at my age or that I would not be supported by my traditional-aged student peers,” she said. “But it’s been just the opposite. I forgot about my age and just focused on learning.

“I’m proof that at any age a person can redefine herself. With help from the community at College of DuPage, I’ve been able to express myself in ways I never felt possible.”

Learn ore about the Anthropology program at College of DuPage