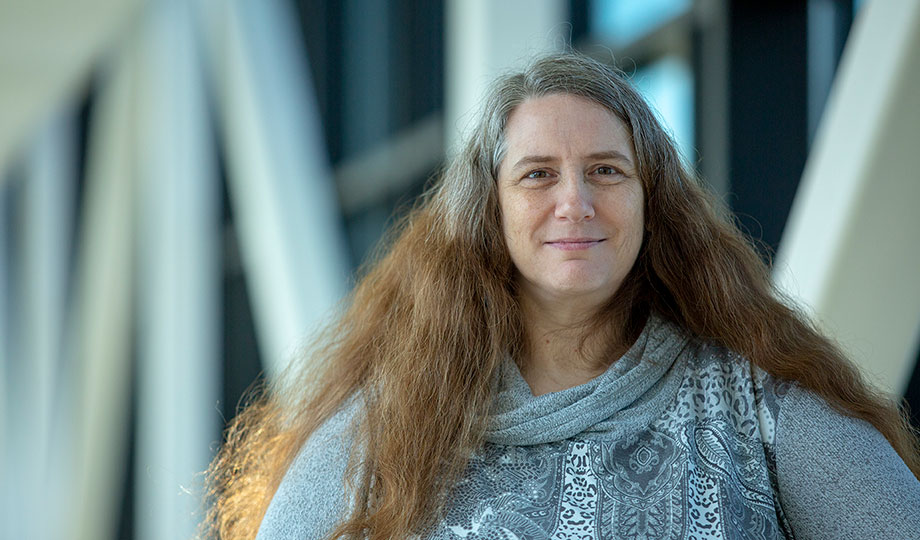 “I worked at United Airlines for many years and had the opportunity to interact with the attorneys and paralegals in the Legal Department,” she said.

But any additional schooling was put on hold, as was her life, when Morris had to care for a series of relatives, starting with her husband when he was diagnosed with viral encephalitis. Thankfully, her managers gave her the flexibility to be with her husband.

Then her sister had surgery for cancer in her jaw, her uncle was diagnosed with Stage IV lung cancer and her mother was diagnosed with chronic lymphocytic leukemia and breast cancer. Morris’ uncle passed away, she lost her husband, and over the course of several years lost her mother as well as a brother and sister-in-law.

“I did not return to work after my husband’s death. Our son was almost 18 and our daughters had just turned 13 and 7,” she said. “My ‘job’ was to do what I could to help my terminally ill family members, be it visiting them, taking them to doctor appointments or watching their kids.

“After my oldest brother’s death, I no longer had my ‘job.’ In three years, I lost three family members, as well as my ‘family’ at the nursing home. After a couple of months, I knew that I had to go back to work. I also knew that I was not thinking properly. So, I decided to take a class to see if I could even think normally again.”

By the time Morris started the Introduction to Paralegal Studies course at College of DuPage, she had not worked in nine years and had not been in school for 30 years since completing her bachelor’s degree. Her goal was not to complete the program but to see if she could do well in one class.

“I was so nervous about going back to school,” she said. “Suzi Horn was the professor. She knew I had a lot of self-doubt and kept encouraging me. Although I was the oldest student in the class, I wound up feeling like I fit in.”

She also began making friends, and together they took Drafting Legal Documents, which worked out well.

“We would get together to figure out how to handle our writing assignments. We also would go out to dinner after class,” she said. “Our group expanded. We made sure to take the next writing class, Introduction to Legal Research and Writing, together. A few of us also coordinated our schedules to take Advanced Legal Research and Writing, as well as Law Office Technology together. I counted on my friends to get me through the technology classes.”

In addition to the camaraderie, Morris could not believe how wonderful each professor was.

“Although their ‘red pen’ could hurt, their feedback was very specific and helpful. They also made sure to include positive remarks. They were always encouraging, supportive, motivating, caring and excited for students to succeed. They were also very patient with the myriad of questions that I asked.”

The best advice Morris received was from one of her instructors, Carol Carlson-Nofsinger, who suggested she attend Paralegal Club events and become an officer. Morris did just that, which further enhanced her experience at COD.

“(Instructor) Linda Jenkins is the advisor who leads the meetings. She became a mentor to me and now a friend. I was asked to be the honorary LEX Paralegal Honor Society secretary. I was thrilled to be part of COD. Being an officer of the Paralegal Club was like being part of a family.”

During her time at COD, Morris received the Bob and Linda Jenkins Scholarship through the COD Foundation.

“I was both honored and humbled that I was selected. Being a single, non-working parent, the scholarship provided financial relief,” she said.

While looking for an internship, Carlson-Nofsinger provided Morris with the name and phone number of an attorney who was looking for an intern. Carlson-Nofsinger gave such a great reference that by the time Morris met the attorney in person, she already had the internship. The internship turned into a job, and Morris now loves her work at Cerami Law Firm, which practices real estate, estate planning and business.

Having earned her Paralegal Studies certificate, Morris still gets together with the friends she made in the program and returns to COD to help in any way possible. She is a peer reviewer for the Paralegal Expo and suggests to the soon-to-be graduates to stay in touch with their friends.

Morris highly recommends the Paralegal Studies program, which is approved by the American Bar Association.

“If you are nervous, try one class, because you will be hooked,” she said. “I would also suggest getting involved with the Paralegal Club or any other COD club or activity. It makes a big difference. Do not be afraid to get to know the professors and to let them know you. Finally, talk with the other students. They are amazing. I found that you can ask any of the students a question, and they would help.

“A few of us were chatting at a Paralegal Club event. An alumna made the comment that she wished that her job was being a full-time student at COD. We all agreed. What an amazing compliment to COD and its faculty and staff!”

More about the Paralegal Studies program