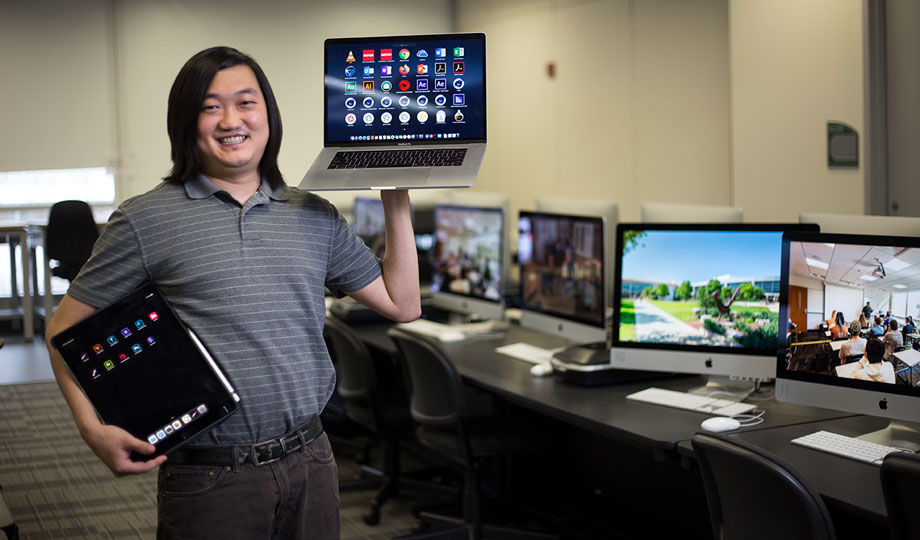 While College of DuPage Helpdesk Specialist Kyle Newman originally considered a career in the culinary arts, it was his father who got him interested in information technology.

“I played around with computers a lot growing up, but I never really thought of it as a career,” he said. “My dad had worked in IT as long as I’ve been alive, so I’ve always been around fixing and troubleshooting computers. I guess you could say I had an ‘ah-ha’ moment where I realized I could have a career with something I'm passionate about. Plus, I really enjoy helping people.”

Once he decided on a career in IT, Newman wasted no time pursuing his passion. He enrolled at COD and earned Associate in Applied Science degrees in Game Design, Game Programming, and Application and Technical Support Specialist. In addition, he earned his bachelor’s degree through COD's 3+1 Computer and Information Science program, a partnership with Lewis University that allows students to earn a baccalaureate degree through Lewis on COD's campus.

He was hired as a student worker while attending COD in 2012 and went on to be hired full-time in 2015. He has also served as an adjunct faculty member at the College since 2018.

Newman said what he most enjoys about working at COD is his interaction with staff members.

“The main thing I enjoy is being able to talk to so many different people around campus,” he said. “Being on the Help Desk, I get to go everywhere and meet everybody. I feel very fortunate to be in that position.”

While he works primarily with staff, Newman is pleased to see that his work also benefits students, even if in an indirect way.

“I help out a lot in the Apple Classrooms, so it’s amazing seeing the students’ finished products,” he said. “I remember setting up laptops with 3D projection software for Assistant Professor Jackie Weaver for a class in the Art program. One day, I walked past the Wings Gallery and saw them all in action. It’s really cool to see what the students create. I’m glad to be there helping our faculty and staff as they help out students.”