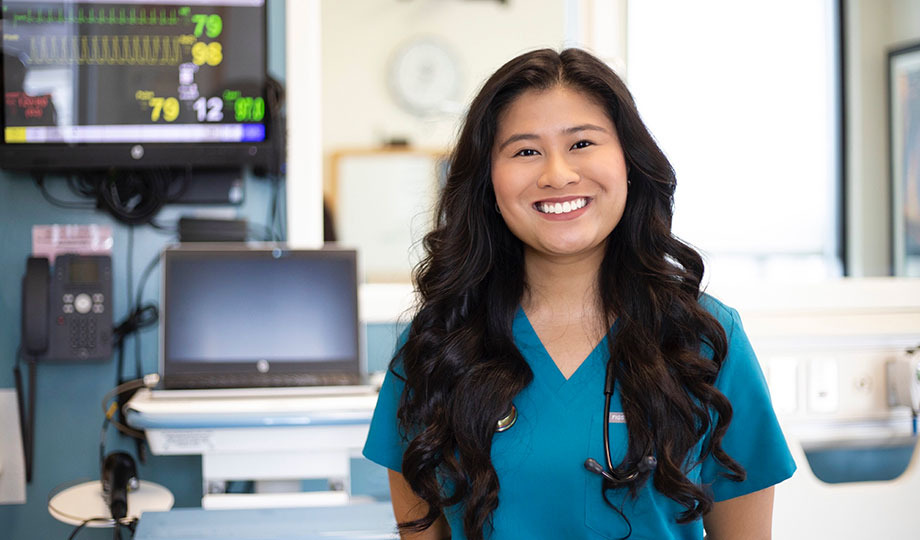 When Jhenevie Oca was 11, her grandfather suffered a life-altering stroke and was placed in a nursing home.

During the next several years, Oca would go to the nursing home right after school and spend time with him as her family provided primary care.

“I was a typical teenager and did not want to be there, so my attitude was very different to what it should have been,” she said. “It took his death for me to realize what it meant to be selfless and to not leave a person when they are facing their darkest hour. I wanted to give the kindness he deserved to others, to turn remorse into something beautiful.”

While the Nursing program really pushed us, the faculty genuinely cared about the students and wanted us to succeed.

Because her sister attended College of DuPage, Oca decided to do the same. She also was named a Presidential Scholar, which covered two years of tuition as well as enrollment in the Honors Program and Phi Theta Kappa, which made it a smart option both financially and academically.

“I loved COD instantly,” she said. “While the Nursing program really pushed us, the faculty genuinely cared about the students and wanted us to succeed. Professor Judy Carino is the type of nurse I want to be. She told us to treat every patient as if they were a family member.

“I also learned so much from my cohort. They represented all ages and were so diverse, and they were here because they wanted to be here. Even through virtual learning during the pandemic, I was inspired by them, which made me want to inspire others.”

While at COD, she received multiple awards from the COD Foundation, including the Foundation Achievers, Bookstore, Affordable Textbook Competition, and Career and Technical Education Needs Textbook scholarships. She also received a scholarship from the Illinois Community College Faculty Association and the DAISY Award for Extraordinary Nursing Students from the DAISY Foundation.

Oca graduated with honors and was selected to give the commencement speech during the Nursing Pinning Ceremony. She currently is in the RN to BSN program at Purdue University and looks forward to starting her career.

“My goal is to give patients the best outcome possible,” she said.

As for COD, Oca was sad to leave after graduating and highly recommends it to anyone.

“I will always miss COD because I don’t think I will find a more beautiful educational community,” she said. “The best thing about COD is how much it cares about the students. I was able to build so many lasting relationships and it prepared me for the future.”