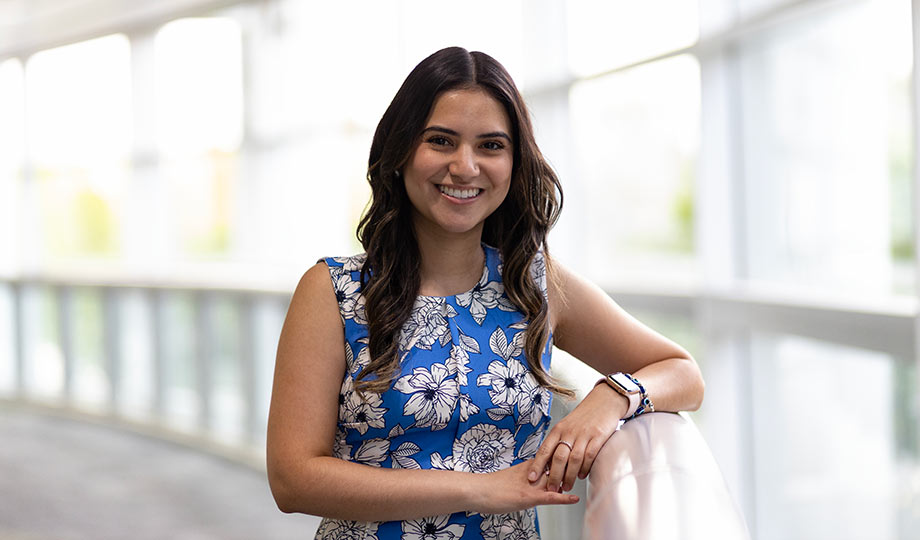 Stephanie Przybyla wanted to go away to school like most of her friends and have the traditional college experience.

But as she searched for universities, her older brother – who went to a four-year university after high school – provided her with one piece of advice.

“My brother was the first person in my family to attend college, so he didn't have much guidance in his decision,” she said. “He said to me, ‘Go to College of DuPage. You won’t regret it.’ If someone had told him about COD, he said he would have definitely gone.”

Although not fully convinced by her brother, Przybyla decided to apply to COD. She later received the Board of Trustees scholarship, which provided $2,500 per year for two years. It was the main reason she chose College of DuPage.

“My family wasn’t able to assist me in my education costs, so I was responsible to pay for tuition on my own, which I did not know how I would do so,” she said. “I am blessed to have received this scholarship. Without it, I don’t know what school I would have ended up at or with how much debt attached to it.”

Przybyla initially was interested in pursuing a career in human resources. But during her second year, she took her first accounting course with Maureen McBeth and Dan Vitale in a section with more than 50 students, which is rare for COD.

“Despite it being a class with more than the average amount of students, Professors McBeth and Vitale gave each student as much individual attention as they would in a traditional class,” she said. “They are some of the best teachers I have had at COD. They made me find my passion for accounting and guided me toward my dream of becoming a CPA. Although it may sound crazy, they both made accounting fun! I then took their Managerial Accounting course in the spring and this reassured me to pursue a career in accounting. I cannot thank them enough.”

In addition to having the opportunity to change majors, Przybyla enjoyed taking advantage of campus life at College of DuPage.

“From studying abroad to being president of the Honors Student Advisory Committee, all of these things and more have shaped me into who I am today,” she said. “By staying at home an additional two years, studying and working, it gave me time to figure out what I truly wanted to do with my life. Now I am mature and ready to move to the next chapter.”

Przybyla earned her Associate in Arts degree, was selected as one of the Outstanding Graduate finalists and received the North Central College Transfer Scholarship, which is a full-ride award given annually to one COD student. While at NCC, she was vice president of the Student Accounting Society and the Becker Ambassador. During tax season, she was the site coordinator for the Volunteer Individual Tax Assistance (VITA) program at Glenside Public Library.

Przybyla also took advantage of international opportunities. In summer 2018, she completed an internship with Ernst & Young and traveled to Santa Cruz, Bolivia, as part of a special E&Y program called Global Student Experience, for which only 75 interns were selected. Then she completed a semester in Limerick, Ireland, during which she traveled to 13 other countries.

Having graduated with a bachelor’s degree in Accounting and two minors in Finance and International Business, she is studying for the CPA exam. Because of her experience with E&Y in Bolivia, the company has hired her as a tax accountant, and she works in wealth and asset management.

Like her brother predicted, Przybyla did not regret attending College of DuPage.

“COD helped me tremendously as I moved toward my educational and career goals,” she said. “I was able to change major several times freshman year without worrying too much, and after taking my first accounting course, I knew that is what I wanted to pursue. By taking business courses and asking my teachers, specifically my accounting professors, for professional advice, they guided me throughout my journey at COD.

“I would have never thought coming from a community college that I would be able to land my first job out of college at a ‘big four’ firm, but it’s not impossible.For students considering COD, I would tell them they won’t regret it. COD has just as many opportunities, clubs, wonderful faculty and study abroad trips as other four-year universities. It is extremely economical and gives students the time and opportunities to explore career options. For any incoming students, I would just advise them to get involved and break the stereotype that a community college is only about going to class and going to work. Instead, be in charge of what you want your College of DuPage experience to be.”

More about the Accounting program