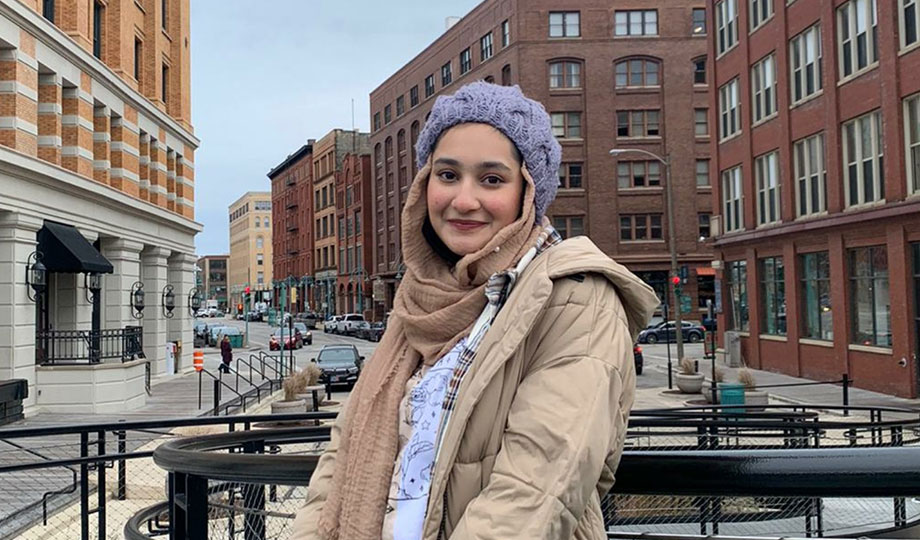 From the moment Amna Razi arrived on campus, she wanted to make a change in the College of DuPage community.

“I’ve always been interested in making the world a better place wherever I go,” she said. “I just want to help humanity in every way I can.”

In an effort to be part of the change she wants to see, Razi joined COD’s Student Leadership Council, which facilitates values-based opportunities for leadership development. Shortly after taking office, Razi sat on the Dining Services Committee to begin the process of making Halal Food – Islamic-permissible meat for Muslims – available to students in the campus cafeteria.

Razo also joined fellow SLC members in Springfield to meet with Illinois state representatives and senators to advocate for legislation to increase resources for community college students in the state. She then was elected vice president of SLC.

Participation in SLC was only the first step in Razi’s involvement on campus. She became the founding vice president of COD’s chapter of Girl Up, a student organization that focuses on raising awareness of the issues that girls and young women face in third-world countries. The club holds fundraisers and events such as women empowerment discussion panels, Henna for Syria and Project Cursive, in which members write inspiring letters to girls facing societal challenges.

Razi said her work with Girl Up opened her eyes to the magnitude of the positive effect she can have on the world around her.

“It made me realize that no matter how small you think your efforts are, in the grand scheme of things, they matter a lot,” she said.

Razi was a member of the Muslim Student Association, Phi Theta Kappa Honor Society and COD’s Living Leadership program, which focuses on developing students into active leaders. She also served as a student leader for New Student Orientation.

In 2019, Razi was named a Lincoln Academy of Illinois Student Laureate, the only community college student in the state to receive the Abraham Lincoln Civic Engagement Award, which includes a $1,000 scholarship. Students are honored for demonstrating outstanding leadership qualities, service contributions, academic success and extracurricular achievements.

COD President Dr. Brian Caputo was impressed with Razi’s accomplishments, both in and out of the classroom.

“Amna brought dedication and integrity to all of her endeavors,” he said. “She is an exceptional example of all that a student can be when she strives to succeed academically while contributing to her community and the world at large.”

After graduating from COD, Razi transferred to the University of Illinois at Urbana-Champaign, where she is studying Integrative Biology, She continues to be active on campus, serving in the Provost Undergraduate Advisory Board and on the Pakistan Student Association Board (PakSA) as its events coordinator.

Her goal is to pursue a career where she can continue to improve society.

“Investigating solutions to solve global warming is one of my biggest goals in life,” she said. “Studying environmental science is challenging, but I know that this is the field where I can help our world the most.”

Razi is thankful for the encouragement that she has received from peers and mentors during her time at COD.

“College of DuPage has been such a welcoming place for me. I’ve gotten so much encouragement and support as a student here. It’s been like a second home.”