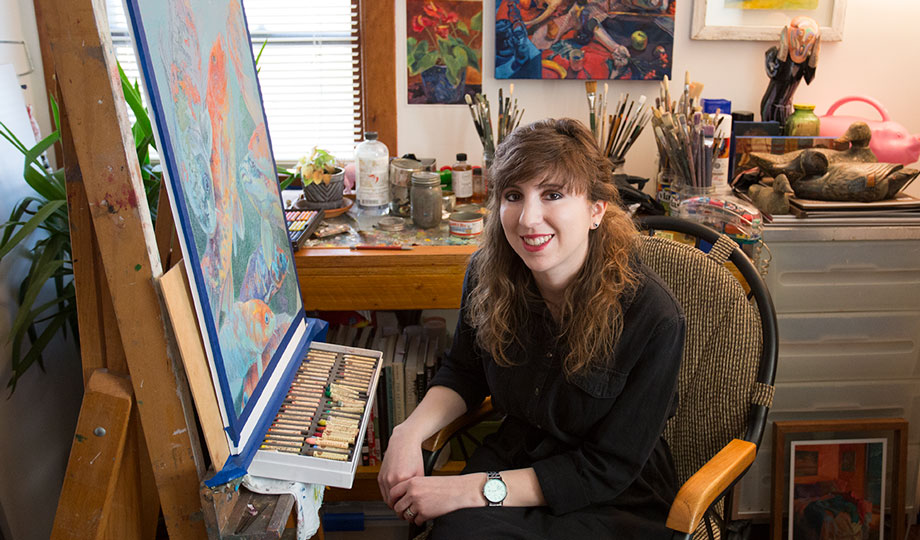 A member of the La Grange Art League since her junior year in high school, Kimberly Kuba Rodey established herself as an artist at an early age, exhibiting and selling her work through the league as well as on Etsy.

But she also wanted a career in art education. Instead of going away to school, Rodey felt comfortable attending College of DuPage, which she already knew was a good option because of the experience her brother had at COD.

“I didn’t want to be one of those people overwhelmed with the whole experience of going off by yourself, away from your family and friends, to a place you weren’t familiar with at all,” she said. “I wanted to commute from home so that I could get used to college.”

Rodey enrolled at College of DuPage, and her plan was on target.

“COD helped me toward achieving my dream of becoming an art teacher, but it also helped me learn what I needed to do to and what it took to succeed in college,” she said.

Rodey, who maintained a 4.0 GPA, graduated with an Associate in Science degree and then transferred to Northern Illinois University, where she switched majors from Art Education to Illustration to keep up with the growing integration between art and technology. She received the Huskie Legacy Award, which is a scholarship for students whose family members also attended NIU; maintained a 4.0 GPA; and was inducted into Tau Sigma Honor Society, geared toward transfer students, and Phi Kappa Phi. She also received the O’Malley-Pugh Scholarship, awarded through the NIU School of Art after a portfolio review.

Rodey was accepted into NIU’s MFA program with an emphasis in painting. She was a graduate assistant for the Painting and Drawing department and, as an MFA candidate, received her own studio space. She also taught Drawing II.

“I had always wanted to teach, so it was amazing having my own class and working with students to build their skills and achieve their personal artistic vision,” she said.

Rodey held her successful solo thesis exhibition, “So to Speak,” at the Annette and Jerry Johns Gallery at NIU, which represented a multi-dimensional dialogue between several bodies of work that examined the articulation of spoken word and inner life.

Having earned her Master of Fine Arts degree with an emphasis in painting, earning a 4.0 GPA, she is keeping busy with a variety of projects. Rodey was one of 10 artists from nine countries offering interpretations of metaphorical or figurative masks for a group exhibition, “The Masks We Wear,” at Manifest Destiny Art Gallery in Barcelona, Spain. She also taught painting as an adjunct faculty member at Elmhurst College and, most recently, as an adjunct instructor in the Drawing area and Foundations area at NIU. As a result, she was included in the NIU School of Art and Design Faculty Biennial at the NIU Art Museum.

“My passion for teaching grew exponentially during my time at NIU,” she said. “There is no greater joy than to see your students progress in an area that is as challenging as it is rewarding. As an educator, I hope to instill a sense of accomplishment within my students and inspire passion and appreciation for the arts.”

Rodey is thankful that College of DuPage provided a sound foundation for her continued success.

“At COD, I also learned a lot about myself along the way as I continued my art both inside and outside of school with a different perspective in mind,” she said.