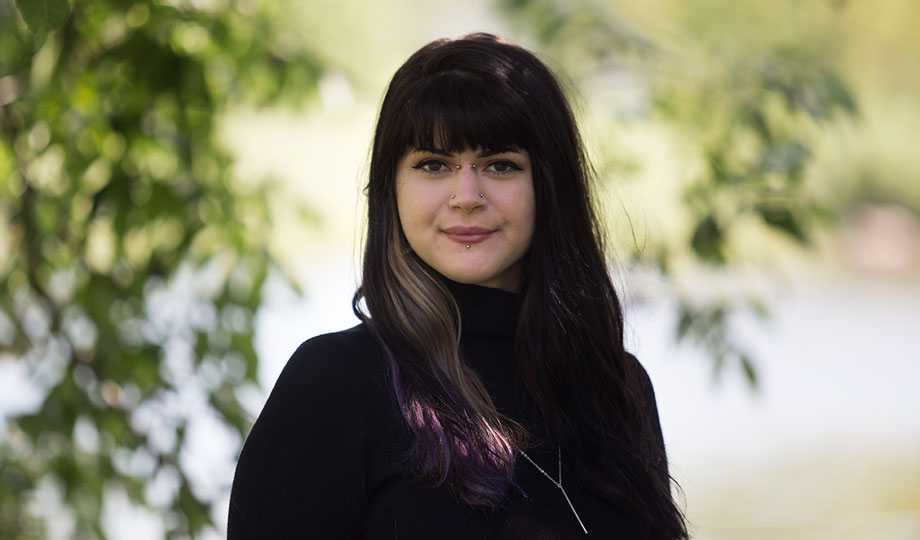 Savannah Santos is using her own battle against an uncommon sleep disorder as the motivation for her career.

“It’s been a struggle most of my life,” Santos said. “For as long as I can remember, I spent most of my days exhausted even after sleeping 11 to 12 hours a night. It’s debilitating. When I was younger, it got in the way of school and activities because I couldn’t focus. Doctors were stumped and, at 9 years old, I was put on antidepressants and Adderall after being wrongly diagnosed with ADHD and depression.”

While researching her symptoms and questioning her doctors’ previous diagnoses, Santos found her way to a sleep specialist at the University of Chicago. She was finally diagnosed with idiopathic hypersomnia, a chronic neurological disorder marked by excessive sleepiness, trouble waking and difficulty doing mental and physical tasks during the day.

Santos has always been interested in the biology behind her disorder and, when she came to College of DuPage, pursued psychology classes to learn more about the intricacies of the brain. Santos started an Honors program independent study to research the physiology of the disorder with the help of COD Associate Professor of Psychology Sarah Butler.

“I have appreciated the opportunity to mentor her,” Butler said. “This interdisciplinary project combines her interests in biology, human behavior and neuroscience, and it connects these fields with an area that is very personally relevant to her. Savannah is a wonderful student and very passionate about her education.”

Santos presented her research project, “Idiopathic Hypersomnia and Narcolepsy Type 2: Subjective Experiences of Stimulant Use,” at COD’s Library Student Research Symposium and placed first, winning $1,000 to support her project. She then was awarded a $600 Margaret Messer Student Research Grant from the Honors Council of the Illinois Region to support her work.

Through this funding, she plans to delve into the experiences of individuals with diagnoses of Narcolepsy Type 2 and idiopathic hypersomnia with a focus on medication effectiveness.

At this time, there is no Federal Drug Administration-approved treatment for her disorder; however, it is common practice to use stimulant medications. According to the Hypersomnia Foundation, some people like Santos do not achieve adequate control of symptoms, and doctors continue to test medications approved for other disorders as well as novel treatments.

“I hope with the gathered data I can find similarities and find out if others have had success with out-of-the-box treatments,” she said. “Doctors have been treating me with various medications but none of them have ever been effective for me. If I’ve learned anything with all of this, it’s that treatment protocol needs to be individualized. Doctors don’t know much about my disorder and try to lump it in with more well-known sleep disorders like narcolepsy. They are two completely different disorders and medication needs to target different parts of the brain.”

After earning a transfer scholarship through COD, Santos will attend North Central College this fall to pursue neuroscience and biology.

“North Central has a sleep lab that they just built so I’m hoping that I can continue my research and look at other sleep disorders to see if they are interconnected,” she said. “I’d love to work with neuroscience faculty there to look at possible biological underpinnings.”

Santos credits COD for allowing her to pursue her passion.

“Coming to COD was the best decision because when you get to North Central, they want you to start neuroscience classes right away, so taking my general education classes at COD was the smartest path for me,” she said. “Through COD’s scholarship, I’m able to further my education and I could not be more grateful.”

After earning her bachelor’s degree, Santos plans to pursue her graduate degree at the University of Chicago Medical Sciences Training Program to become a scientific researcher or doctor at the hospital that finally gave her the correct diagnosis.

“University of Chicago is a special place for me because it’s where I was finally given answers,” she said. “I’m so grateful COD has prepared me for future endeavors, and I hope to enact real change for fellow sufferers.”