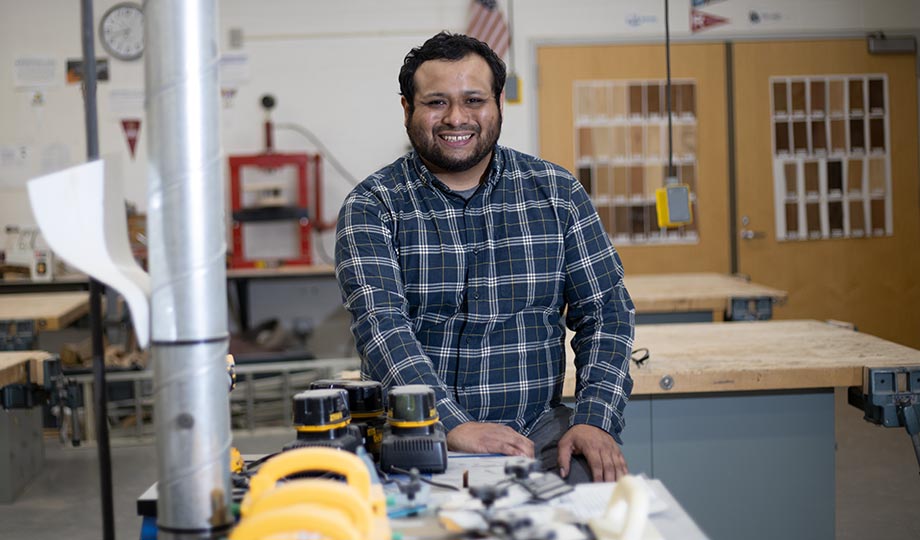 Eric Tecuanhuehue never thought he would become a teacher.

“I really did not like school growing up, and I struggled a lot,” he said. “I did not always hang around some of the best people, which did little to help my situation or outlook on high school.”

It was his Technology and Engineering Education (TEE) teacher and wrestling coach who became a mentor to Tecuanhuehue and changed his attitude about school.

“When I met Mr. Skorup, I started to really change things around in my life,” he said. “I took a lot of classes with him in the TEE department, including drafting and design, computer aided design and architecture design. He taught me so much more than the content in these classes as well as a lot of life lessons, which I really needed at that point in my life.

“I really loved that my TEE classes were very hands-on. They felt like a break from my general education classes, which I really needed, and ended up helping me in math and science. Time would just go by so fast whenever I was in the drafting room. I would constantly spend time there either during lunch or after school, just to work and spend more time learning from Mr. Skorup.”

At the end of his senior year, Tecuanhuehue was struggling to determine what his career should be. Although he enjoyed his TEE classes, he did not see himself as an engineer or architect.

“When I told this to Mr. Skorup, he said to me, ‘You’re good at these types of classes, you’re a pretty good wrestler, so why don’t you teach and coach wrestling?’” he said. “That’s when I looked around the classroom at some of my classmates and told myself, ‘I think this is something I would really enjoy.’”

After graduation, he returned and asked his mentor if he could volunteer as a wrestling coach. Tecuanhuehue became his assistant for the freshman wrestling team, and after a few weeks he knew this was the right path for him.

When it came time for college, Tecuanhuehue knew it would be a challenge financially and selected College of DuPage.

COD helped me grow and mature a lot. It was nice that I was able to go at my own pace and pretty much make my own schedule.

“Since neither of my parents went to college or were born in this country, they really did not know much about these types of things,” he said. “Even though they did not have a very high education, they really valued education for my sister, my brother and me. They really pushed us to do well in school so we could go to college and not have to struggle like they did and still do. During my senior year, my parents told me if I were to go to a university, financially I would be on my own, but if I went to COD, then they would pay for it.”

COD gave Tecuanhuehue a fresh start and a new outlook on education. With the small class sizes and engaging faculty, he began to take his education more seriously and realized learning could be fun.

“COD helped me grow and mature a lot,” he said. “It was nice that I was able to go at my own pace and pretty much make my own schedule, which was important since I was also working full-time,” he said. “When I took Education 1100 with Professor April Zawlocki, that class showed me firsthand what education was like. And after spending time in high school TEE classes during my clinical field experience, it ensured that teaching was the right career for me.”

Tecuanhuehue transferred to Illinois State University, where he earned a bachelor’s degree in Technology and Engineering Education. He began teaching TEE courses at Metea Valley High School when COVID-19 hit and forced everyone to shift instruction from hands-on classroom lessons to online formats. Having taken Technology Integration in K-12 Schools through COD’s Teacher Preparation program, he knew a remote solution for lab work had to exist. After some research, he discovered Electude, a web-based software that alternates between teaching online and lab activities. Now his school district is using the program with success.

As he looks toward the future, Tecuanhuehue—who is finishing his master’s degree—is considering whether to remain in the classroom or seek an administrative position, perhaps even becoming an assistant principal or a principal. However, if he took that route, he would miss working directly with students.

“The whole reason I got into this field was teaching kids’ useful skills that they can use in a future career or in their everyday lives,” he said. “But I also see myself as a dean or principal, as I enjoy working with some of the more difficult students. They remind me a lot of myself or some of my friends when we were that age. This makes it easier for me to relate to them. I also know I want to be a head wrestling coach, and I have thought about teaching at either a university or a community college.”

As for COD, he would recommend that students take advantage of the variety of classes, especially if they are not sure of their career paths, as well as scholarship opportunities.

“COD has amazing faculty, facilities and career options,” he said. “Don’t be afraid to try something you know nothing about, because you never know what you’ll end up finding for a career. Also look for scholarships, especially if you are in the Teacher Preparation program. This is something that I wish I would have taken advantage of, especially being a Hispanic first-generation college student.

“The class sizes at COD are much smaller than at a university, which makes learning easier and fun. I sometimes struggled in my classes at ISU, which had up to 300 students in a lecture hall. That’s when I realized how much I appreciated being at COD, plus you get to know your classmates and professors a lot better.”

Learn more about the Teacher Preparation program at College of DuPage