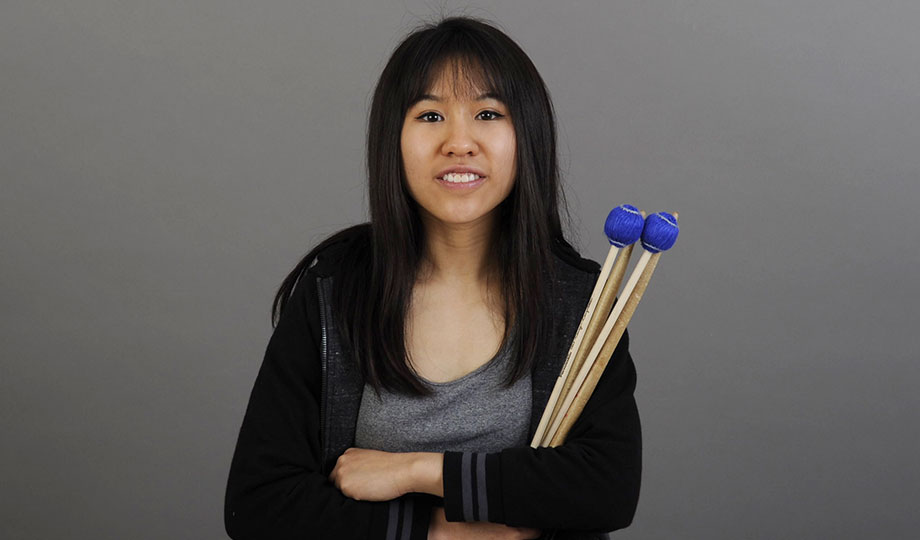 Melissa Wang has played percussion since the band program was introduced to her fifth-grade class and has been interested in teaching since third grade.

When it came time for her to decide on a field to pursue, she was unsure and chose College of DuPage as an affordable opportunity to help her decide.

“I was undecided between graphic design, animation, architecture and music education,” she said. “I’ve also been interested in being a teacher since third grade, but I did not know what kind of teacher I wanted to be. I became particularly interested in music education after leading rehearsals for a tune I arranged for the COD Percussion Ensemble.”

She made the right choice. Wang has distinguished herself and found great success as a student at COD. She entered the College as a Presidential Scholar and was named winner of the 2019 Jack Stone Award for New Music for original composition, “Downright Up and Left.”

Wang’s winning composition was performed by the Line Upon Line Percussion ensemble during an awards ceremony in the Palmetto Center for the Arts at Northwest Vista College in San Antonio.

“The best thing about winning the award was going to Texas when the weather currently was 40 degrees warmer than Illinois,” she said. “Also, it was great to hear another group's interpretation of my composition and to attend rehearsals with the group, because the music-making process is as irreplaceable of an experience as the performance on stage.”

Wang graduated with high honors, earning her Associate in Fine Arts degree in Music. She hopes to earn a master’s degree in music education and eventually teach music in a high school or college.

She is pleased with her experience at COD, citing the Music program’s accessible classes, hardworking students and, in particular, the professors. Wang credits the Music program with playing a large role in helping her to meet her goals.

“The professors provide incredibly valuable musical opportunities,” she said. “COD Director of Percussion Ben Wahlund introduced the percussionists to important aspects of leading rehearsals and given the students spots in concerts for solo performances or small group performances. COD Director of Jazz Ensembles Tom Tallman informed students about projects such as the Jack Stone Award and the Student Research Symposium, and was always supportive about the students’ projects. Lastly, COD Choral Music Director Lee Kesselman was a great help and showed a lot of patience toward me during my beginning stages of composition.”

More about the Music program