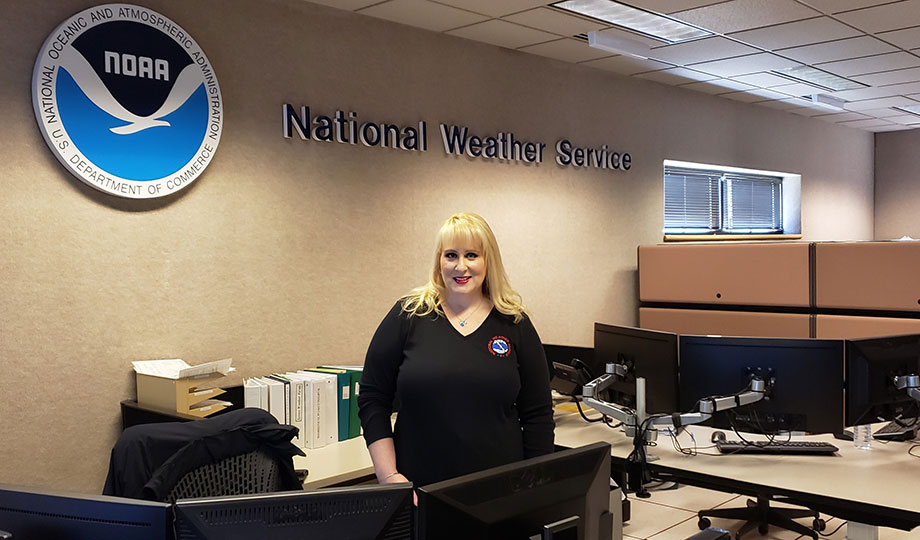 When she was young, Christine Wielgos often watched summer thunderstorms together with her father.

“I became very interested in weather over time, especially severe weather,” she said. “To this day, Dad and I still discuss the weather every time we see each other and still watch storms together from the back porch.”

Wielgos chose College of DuPage for its smaller class sizes and for the meteorology courses offered by Professor Paul Sirvatka.

“Because of all the meteorology classes that were offered at COD, I definitely felt that I had a distinct advantage when I transferred to Northern Illinois University,” she said. “I feel as though I would not have succeeded as well at NIU if I did not attend COD first, not only academically but personally as well. The storm chasing classes were a blast, of course, and they were an incredible learning experience for me in so many ways.”

Having earned an Associate in Science degree at COD, Wielgos then received her Bachelor of Science in Meteorology at NIU. She started her career as weather observer at the Ft. Wayne International Airport and worked for Midwest Weather before moving to the National Weather Service in Paducah, Ky., where she was first a meteorologist intern and then a journeyman forecaster. In the fall of 2019, she became Assistant Warning Coordination Meteorologist and then was promoted to Lead Forecaster. Her goal was to become a Warning Coordination Meteorologist, which happened in 2021.

Wielgos is happy she started at COD and advises students to study hard.

“I am living proof that if you are willing to put forth serious effort, you will reach your goals,” she said. “Surround yourself with positive, like-minded people who will move you forward and help you where you are weakest. Utilize all your available resources. I am always telling my kids, ‘You have no idea how good you have it now, with the internet the way it is.’

“COD was a wonderful first step in the whole college experience.”

More about the Meteorology program