Campus Guidelines
Welcome to College of DuPage! The Library is now open. Starting Thursday, June 24, masks are optional for those fully vaccinated and required for those not fully vaccinated. Learn what to expect on campus or read Coronavirus (COVID-19) updates. 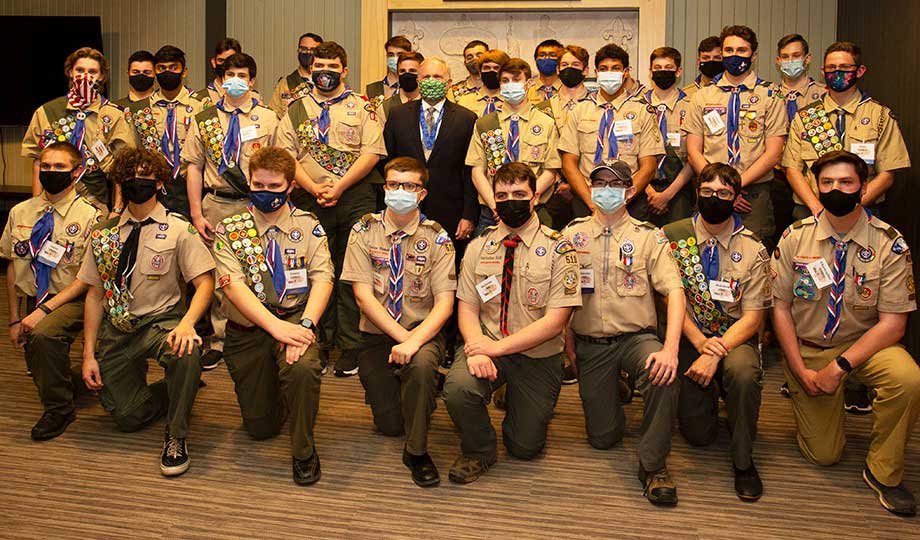 The Three Fires Council of the Boy Scouts of America recently awarded College of DuPage President Dr. Brian Caputo the Outstanding Eagle Scout Award during a Gathering of the Eagles recognition ceremony.

View photos from the ceremony.

“I am honored and humbled to receive this distinction,” Dr. Caputo said. “The Boy Scouts have given me a multitude of wonderful opportunities to learn, serve my community and provide leadership across a range of constituencies. The values, skills and experiences I gained through the Boy Scouts organization have had an inestimable impact on my life, both personally and professionally.”

Implemented in 2010 in conjunction with the centennial anniversary of the Boy Scouts, the Outstanding Eagle Scout Award is granted to Eagle Scouts who have distinguished themselves at the local, state or regional level through service to their profession and community. Dr. Caputo earned the rank of Eagle Scout in 1977.

Dr. Caputo, a life-long scout, currently serves on the Three Fires Council executive board as the Vice President for Governance. He has held a range of volunteer leadership positions with the Boy Scouts, including Den Leader and Assistant Scoutmaster, Three Fires Council; Unit Commissioner, Rainbow Council, Ill.; District Advancement Chairman, Northwest Suburban Council, Ill.; and District Commissioner, Lake Huron Area Council, Michigan. Following in their father’s footsteps, his two sons also have achieved the rank of Eagle Scout with the organization. Dr. Caputo is also involved in mentoring and speaking to COD students and alumni as well as working closely with the Student Leadership Council and other college groups.

Dr. Caputo said he is pleased with the opportunity to build relationships afforded by his role as President of COD and as a member of the Boy Scouts of America.

“Because I believe in the power of cultivating productive relationships and partnerships within the community, I plan to continue to create, maintain and deepen connections between the Boy Scouts and educational organizations in the area, including College of DuPage,” he said.

“Three Fires Council is very proud to recognize the lifetime of community service by Dr. Caputo in bestowing on him the Outstanding Eagle Scout Award,” he said. “His example is a benchmark for other Eagle Scouts to strive towards. We are glad to have his leadership, skills and passion to advance our mission of instilling the Scout Oath and Law into the lives of thousands of young people here in our community.”