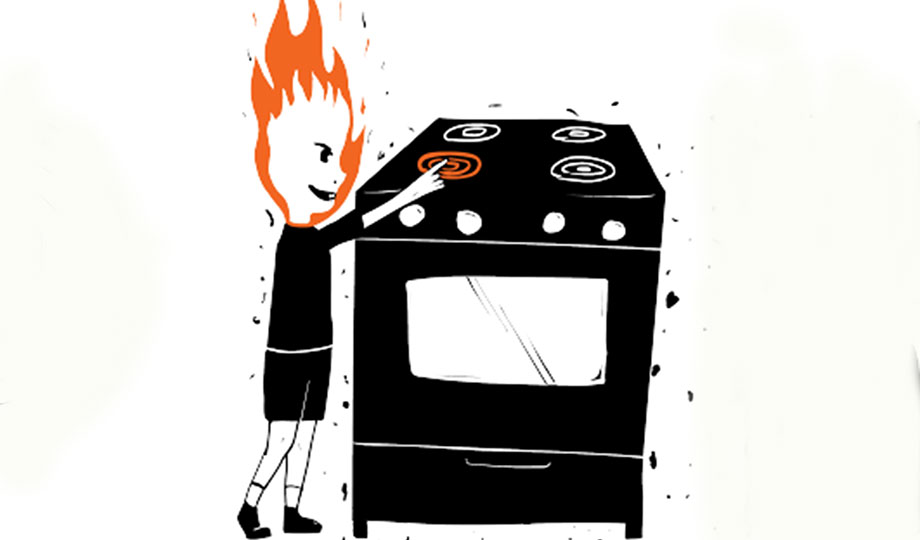 Performances are at 8 p.m. Thursdays to Saturdays and 3 p.m. Sundays Nov. 26 to Dec. 19 in the MAC’s Playhouse Theatre.

Naebig’s autobiographical work poses the question, “What happens when you achieve the high-rolling lifestyle you always dreamed of…at 13 years old?”

Set in Cicero during the 1970s skateboard boom, “Stove Toucher” is an extraordinary and funny coming-of-age story about a shy kid who falls in love with skateboarding, opens a wildly successful skateboard shop, is dubbed “the teenage tycoon” by Charlie Rose, and becomes a national story - all before the age of 13. A little bit “Doogie Howser,” a little bit “Basketball Diaries,” “Stove Toucher” is a high-adrenaline, hilarious, heartfelt story about tough love and determination, pushing the edge, and the universal experience of ignoring sound advice - and the truth that sometimes we need to learn the hardest lessons for ourselves.

“’Stove Toucher’ is the first play I’ve ever written and it all started when I related a comical anecdote to an acquaintance about getting back on a skateboard in middle age,” said Naebig. “Now eight months later, thanks to the incredible encouragement and support from friends who guided me through the process and provided important feedback along the way, I look forward to performing this before a live theater audience. My hope is that ‘Stove Toucher’ will make you laugh, gasp and maybe even tear up, but ultimately, walk away with the encouragement to embrace who you are and, if life has knocked you down, think about getting back on that horse (or skateboard) again.”

“I’ve known Kurt for nearly 32 years and I value the opportunity both as a managing artistic director of BTE and Kurt’s friend to work as director on this play,” said Canaday Howard. “BTE has always sought to ‘give stories life.’ For this season we are especially interested in presenting plays that provide heartwarming looks, sometimes touching and sometimes hysterical, at people on the brink of great change and ‘Stove Toucher’ fits this perfectly.”

Naebig (Playwright/Performer) has worked professionally in theater, film, television and radio for more than 30 years, and has been teaching and coaching actors since 1992. A Juilliard graduate, he also studied at the Moscow School of the Arts. He is the former artistic director of The Theatre of Western Springs. Acting credits include Buffalo Theatre Ensemble, Portland Stage, Milwaukee's Pabst Theatre, National Jewish Theater, Steppenwolf Theatre and Chicago Shakespeare Theatre. He appeared in such films as “Public Enemies,” “The Express,” “Witless Protection,” “Henry: Portrait of a Serial Killer,” “The Relic,” “Dillinger” and “Howard Beach: Making the Case for Murder.” Television credits include “Fargo,” “A League of Their Own,” “Empire,” “APB,” “Sense8,” “Chicago Code,” “Detroit 1-8-7” and multiple episodes of “Chicago PD,” “Chicago Fire,” “ER” and “Prison Break.” Naebig recently directed another season of “VC – The Webseries.” His BTE directing credits include “Defiance,” “The 39 Steps,” “Don't Dress For Dinner,” “The Drawer Boy,” “Trumbo: Red White and Blacklisted” and “Leading Ladies.” Naebig also will be directing BTE’s upcoming production of Mat Smart’s “Naperville” (Jan. 27 to Feb. 27).

Canaday Howard (Director/BTE Managing Artistic Director) has directed numerous BTE productions including “Good People,” “Time Stands Still,” “Noises Off,” “Into the Woods,” “Dancing at Lughnasa,” “The Mystery of Irma Vep,” “Rabbit Hole” and “Frankie and Johnny in the Claire de Lune.” Favorite BTE acting roles have been Della in “The Cake,” Annie in “The Real Thing,” Harper in “Angels in America,” Nancy in “Frozen” and Ruella in “Communicating Doors.” Canaday Howard is a member of Actors’ Equity, and is on the Artistic Team of the Jeff Committee. She holds an MFA in directing and has worked regionally with Three Rivers Shakespeare Festival, City Theatre Company, Belvoir Terrace, Drama Workshop, Down River Dinner Theatre, Ingersoll Theatre and Charlie’s Showplace. Additional work includes tours of both theater and dance, as well as helping to create and perform several improvisational shows. She was the statewide co-chair of the Theatre Panel for Illinois Articulation Initiative for more than 15 years. Canaday Howard is chair of the Theatre Department at College of DuPage and was COD’s Outstanding Faculty for the 2003-2004 academic year.

This 90-minute work is performed without intermission. Please note: this play contains adult themes and language.