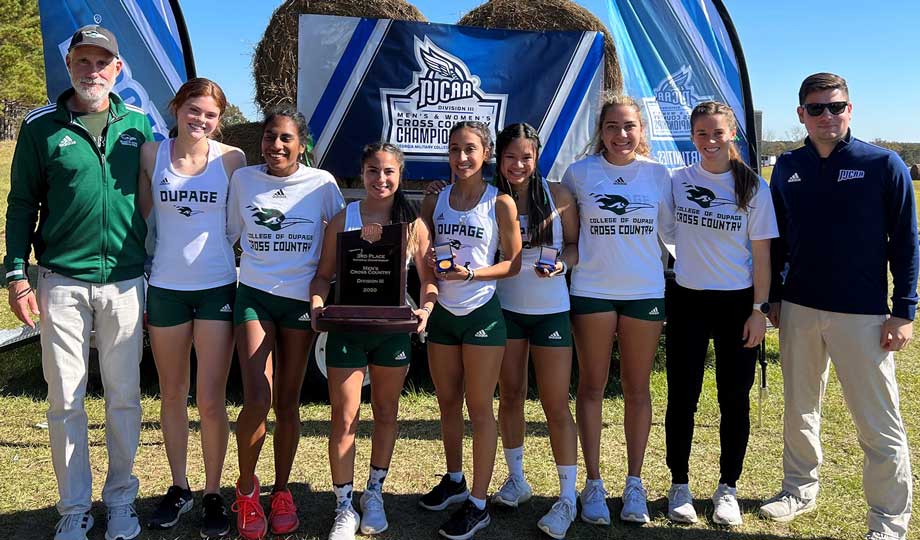 The College of DuPage men’s and women’s cross country teams made room in their trophy cases this week after both teams finished third in the NJCAA Division III National Championship.

“Both teams staged historic performances making the COD community extremely proud this weekend,” said COD President Dr. Brian Caputo. “I am impressed by each team member’s hard work and dedication and look forward to seeing the trajectory of their future successes.”

COD Athletic Director Ryan Kaiser said both teams had a successful end to what turned out to be a season that saw the program grow in extraordinary ways.

“The teams’ success is a direct reflection of the overall resurgence of the COD athletic department,” he said. “Their achievements are a continuation of last year’s national championships in both men’s and women’s track and field. Coach (Robert) Cervenka has developed a plan that will see several more winning teams under his tutelage. An increase in participation for all sports indicates that the Chaparral athletic department is alive and well.”

"We're very proud to be one of two programs to finish with top-three efforts in both races,'' said COD Men’s and Women’s Cross Country Coach Robert Cervenka. “From day one of the season, our teams showed a lot of pride by competing together. I'm proud of what they accomplished. They represented our school and our team well.''

“It's believed to be the highest women’s cross country finish for the program in COD history,” Cervenka said. "Anytime you finish inside the top 10 at a national event it is a big accomplishment, and Lillian and Belle are very deserving of the honor. I couldn't be happier with the team’s efforts this year.''

Cervenka hopes that the success of the season will allow more students to compete next fall.

“We'd love to have double-digit numbers,'' he said. "The more competition, the more camaraderie develops. When you have more numbers out there, the energy feeds off.''

Cervenka also received his Region 4 Coach of the Year award during the meet.