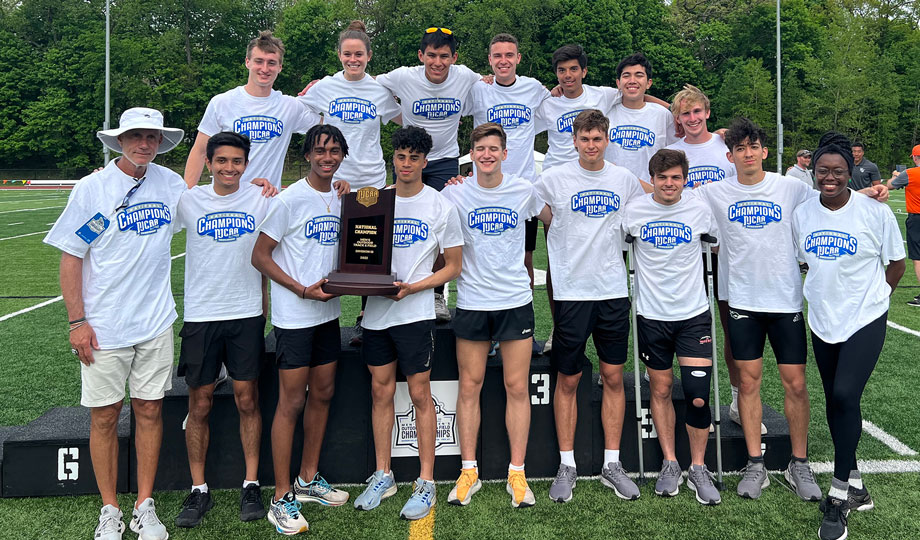 Defending National Junior College Athletic Association men’s track and field champion College of DuPage left no doubt about repeating the national title with an outstanding display of depth and personal achievement May 14.

Behind Josh Rivers, who won two individual titles, and a superb supporting cast that scored in 17 events, the Chaps won the men's title with 118.5 points, followed by Mineral Area College with 96.

It marks the sixth title in school history, and is the first time since the 2003 season that the Chaps successfully defended their title.

"It took a total team effort to come here and perform and win,'' said Chaparral Track and Field Head Coach Robert Cervenka. "We had a superstar performance from Josh, and with Anthony Eddy, Diego Villalobos, John Sassan, and Max Szul and Axel Huerta making the most of their talents. I'm in awe of what they were able to accomplish and bring a home a title for a second straight year.''

Rivers won both the long jump and high jump with season-best efforts Friday, and then added to his point total in both the 100- and 200-meter and in the 4x100 meter relay. Eddy finished second in the 1500 on Saturday, and gutted out a seventh place showing in the 800.

"This was a big week for Anthony, who really showed his ability,'' Cervenka said. "He was a big leader for us in cross country and showed it again this week.''

Sassan, who sustained an injury during Friday's long jump, ran the opening leg on the 4x100 relay, and along with Villalobos and Rivers, secured 23 team points in the long jump.

It took a total team effort to come here and perform and win. We had a superstar performance from Josh, and with Anthony Eddy, Diego Villalobos, John Sassan, and Max Szul and Axel Huerta making the most of their talents.

"Josh really shined all week,'' Cervenka said. "He took advantage of his talents and proved it.''

Szul placed third in the high hurdles and added a fifth-place effort in the 400 hurdles, along with running on the 4x100 relay.

"Max is running faster than he did in high school,'' Cervenka said. "We don't win if we don't have everyone pulling their weight and competing in multiple events. They bought in and great things happened because of their willingness to put team first.''

Villalobos scored fourth in the 100, second in the 4x100 relay, second in long jump and third in the triple jump. He piled up 21 points including two from the eight-point 4x100 relay.

Huerta, who ran the steeplechase just once prior to this week, placed fourth in that event and sixth in the 5,000.

"He and Diego were such key guys for stepping up and giving us points.'' Cervenka said.

Cervenka was named the NJCAA men's coach of the year for the second straight year.